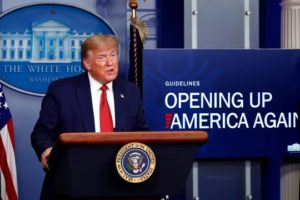 As of May 3, we have more than 1.1 million cases of Covid-19 and 66,445 dead. How many more will we have in a month with this dangerous reopening? Trump has, for example ordered the opening of meatpacking plants, where there have been 5,000 cases and 20 deaths so far. This will surely mean more deaths.

In Trump’s phase one, states with a two-week downward trend in the number of cases can reopen many businesses, movie theaters, places of worship, sporting venues and gyms if they observe strict social distancing. Eighteen state governors have announced partial reopening; even though some of them, like Georgia, Tennessee and Colorado do not show a clear downward trend. Six additional states may also reopen soon. Some health experts believe there is still not enough testing and contact tracing, and they fear that reopening could lead to a second wave of contagion.

The Far Right Protests with Arms

Far right groups have held protest demonstrations in about half of the states, some displaying swastikas and Confederate flags (the flag of the pre-Civil War South and slavery) and often carrying high-powered firearms. In Michigan, where Governor Gretchen Whitmer has refused to reopen the state, an “American Patriot Rally” drew several hundred protestors, some of them heavily armed, who invaded the state capitol. The demonstrators say the government has “enslaved” them by forcing them to stay home and keeping them from working.

Trump, encouraged rightwing demonstrators by tweeting support for “liberating” various states, called the protestors “very good people,” reiterating the words he had used at the time of the time of the Charlottesville protests in 2017 when he called white supremacists “very fine people.” The far right, getting a lot of attention, remains small in numbers, but it is acting boldly and attracting a following.

The economic situation is catastrophic, despite nearly three trillion dollars in federal aid to business, hospitals, and workers. Since March 30 million workers have filed for unemployment, but millions have been unable to do so because of problems with the state unemployment systems, because they are precarious workers, or because they are undocumented immigrants. Some estimate the current unemployment rate as high as 22 percent, something not seen since the Great Depression of the 1930s. Many workers get their health insurance through their employers, consequently 12.7 million workers are estimated to have lost their health coverage.

While the situation has improved, nurses and health workers continue to protest over lack of protective equipment. Other workers from shipyards to restaurants have engaged in 150 short wildcat strikes. A call for May Day strikes at Amazon, Whole Foods, Target, FedEx and other companies failed to materialize, though there were small protests. The Democratic Socialists of America is organizing with groups like Labor Notes and the United Electrical Workers Union.

Trump blames China for the coronavirus and his followers believe him. His popularity remains at 43%. One poll now shows Biden defeating Trump 45% to 39% in the race for president in the November election.

Biden appeared on TV to refute a charge of sexual assault by a former aide, but women leaders of the Democratic Party stand by him. In an attempt to win over Bernie Sanders’ supporters, Biden agreed to let Bernie keep hundreds of delegates to the Democratic Party Convention that he should have had to forfeit because he dropped out of the race. The ploy is intended to get Sanders’ supporters to work and vote for Biden. Most will, believing Trump must go.