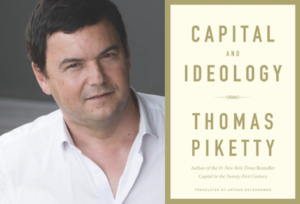 Thomas Piketty’s Capital in the 21st Century (2009) convinced many, largely by its scale, that rising inequality is bedded in our economics. Now he’s followed with a tome on how we embed inequality in our politics.

Piketty contends that decades of rising wealth inequality have allowed the top quintile to dominate everything from education to elections, and—more importantly—to disseminate a social theory that justifies it. To compound it, the working class spent those decades retreating to the Right, both from the heartbreak of Communism and the fear of rising global competition. But with inequality, crises (‘ruptures’ in Piketty-speak) are certain, allowing for change if there is different thinking to guide it.

Paul Krugman reckons Capital and Ideology “stands Marx on his head.” But it’s fairer to say it elides him, taking cues from Hegel, instead. In Piketty’s revision, “the history of all hitherto existing societies is the history of the struggle of ideologies and the quest for justice.”

Capital and Ideology proffers not only a theory of inequality, but a program—of sorts—to combat it, sans class struggle.

According to Piketty inequality is “neither economic nor technological. Rather, it is ideological and political.” (It is unjust because it stunts our socio-political thinking.) “So, in contrast to relations of production determining a society’s ideological ‘superstructure’, the realm of ideas—the political-ideological sphere—is truly autonomous.”

Ergo, because inequality is not determined, every society must develop an ideology (a plausible discourse on class, race, or merit, etc.) to justify—and make real—its latent (or coming) injustices.

How? ‘Ideologies’ both dictate and rest upon ‘a theory of borders (who belongs and who doesn’t) and property (what belongs—and what can’t belong—to whom).’ Combined they form inequality regimes, a set of discourses and institutional arrangements that shore the inequities of a given society.

While never exempt from hypocrisy, each regime contains plausible and sincere elements for us to derive useful lessons. So Piketty walks us through more than twenty quasi-stadial examples from across much, much time and space, from Ternary Societies, which had to convince, not only labor of its position but dual ruling classes of their limits, to Proprietarian Societies—from slave to ‘hypercapitalist’—which transferred corporate powers to the state but left property regimes intact.

Their histories are dialectical: “change occurs when evolving ideas confront the logic of events.” Regimes fail when historic ‘ruptures’ void their premises and, sooner or later, they implode. Then, relative advantage, political expediency, (lack of) political imagination, and fear of further rupture engender new ideologies which inform new regimes.

Take the French Revolution: “Because political time was accelerated, although certain ideas were ripe for application, there was no time to put them to the test in concrete experiments. Events- rather than knowledge- dictated their law to France’s new leaders. Thus, patrimonial holdings remained extremely concentrated and inequality rose between 1789-1914.”

The best of these in Piketty’s eyes, the post-war welfare states of Europe and New Deal America, succumbed to neo-proprietarian regimes—a mix of libertarian-anarchism, classical liberalism, hyper-meritocracy, and poor shaming, much-derived from the collapse of Communism. And this is where, despite it running in many directions, Capital and Ideology begs we focus.

Piketty hints at how the neo-proprietarian regime might implode. He argues that proprietarianism is a politico-ideological regime for ‘absolute protection’ and ‘sanctification’ of private property in order to preserve it. Capitalism rests on the same regime, yet, contradictorily, it seeks constantly to expand private property and asset accumulation beyond accepted boundaries, inviting rupture.

That said, Piketty’s grander schemes mire in battle against the bitter-nationalist backlash against ‘hypercapitalism’. Here, I think he over-credits disillusion with Communism; a shaky point, anyway, since it more informs than stems from the ‘hypercapitalist’ regime.

What does he suggest? As Capital in the 21st Century demonstrated, inequality has been rising world-over since the 1980s. Left uncurbed, in ideological terms, “without a credible new universalistic and egalitarian narrative” inequality will force a retreat into the nationalist politics of the 1930s.

Yet if it’s ‘the struggle of ideologies’ that matters, then our fate lies principally with the Brahmins. This is a sizable problem, since Piketty sees today’s hypercapitalism, characterized by the breakdown of Left-Right politics, as well as global and national-identarian camps, largely the result of the “Brahmin-Left” abandoning the working-class.

More problematic, even if the old narrative is fraying, Piketty’s premise, that every society must justify its inequalities to avoid collapse, is not at all certain. By his own admission, hyper-elite capitalists today do not require much approval. He even laments, in the era of big data, our economic and financial systems, as well as our politics, are getting more opaque, particularly regarding wealth, “complicating any informed debate on inequality”.

Piketty nearly misses his own (stronger) point; that injustice thrives in marginal tax rates, biased data, and offshore accounts that even the experts have trouble understanding, forget narrating for the public. So why should new narratives be effective?

Also, Piketty concedes, from the First World War to 1980, despite integrating social goods like employment security into the capitalist project, wage inequality did not significantly decrease. Nor did “top marginal rates above 80 percent for nearly half a century harm capitalism in the US—but the opposite, productivity growth was higher between 1950-1990 than in 1990-2020.” Rather, most of the Golden Age increase in equality was from the collapse of rents, primarily by the matrices of two wars, which (in Europe) cut the top centiles share of wealth by two-thirds.

In other words, while Piketty offers some plausible—if not probable—ways to reduce ‘inequality’ (foremost, by reinstating those taxes), he does not foresee it gelding the owner class. Instead, “we must see class as profoundly multidimensional… (for) only through the widest possible deliberation will we supersede Capitalism.” Which, Piketty figures, takes a sizable governing body and lot of expertise.

There is, however, no corollary bellow. For a thousand pages bent on equality, we the people are nearly absent from Piketty’s analysis. Piketty calls for more ‘participatory socialism.’ But participate how?

In sum, Piketty’s schema, the struggle of ideologies in lieu of class struggle, put’s in mind Marx response to the young Hegelians in The German Ideology: “there weren’t ideas until there were people to think them.”

Otherwise, Piketty’s model applies more than a touch of presentism, including to recent events, and two-dozen such histories, I doubt, will convince most readers that ‘inequality’ is itself a strong enough lens to find answers to our present crisis. Worse still, in taking such a broad view of inequality, capital, which most present generation readers look to Piketty to explain, sort of gets a pass.

Furthermore, it’s odd to read a book at once so timid and not timid regarding grand narratives, and this strikes me as one of its more important facets. These days, we are all expected to synthesize narratives of Enlightened Capitalism with narratives about capital-driven human extinction. I wonder what contemporary historiography will bear.

Piketty has done a laudable amount of research, worthy of examination. Too much to address in a book review and, I suspect, too much to address (legibly) in one book. But if there is a takeaway, for anyone wishing to halt extinction—instead of “supersede” it—it’s not from Piketty that we should take our cues; Marx’s class analysis must return to the fore.

Posted May 3, 2020 Political Economy by Jason Schulman
About Author
JAMES MUNSON is an artist, writer, worker, concerned parent, and host of The Marxist Reading Group in Portland, Oregon.