A headline in a recent news story about Los Angeles teachers, calling the district’s teaching force “old and costly,” is a companion piece to the New York Times front page article about the Success Academy chain headed by Eva Moskowitz.  Taken together these explain why teachers unions are being attacked so viciously and why the unions need to change gears and direction now.  Once again, the Chicago Teachers Union leads the way in its new contract demands.

The Right and many liberals insist that improving teacher quality is the best way to end poverty. This line of reasoning is based on the assumption that governments are powerless – or ought not – to interfere with the “right” to make profit in any way possible, including or especially in situations of dire emergency and human disaster, as Naomi Klein explains. Having succeeded in firing all of New Orlean’s teachers, mainly African American, after Katrina, to create the first all-charter school district in the nation, education “reformers” in both parties have gone after career teachers elsewhere. The aim, as this news article shows, is to eliminate experienced teachers who cost more. In so doing teaching is destroyed as a career and profession. To make that happen in a way that is seemingly objective, the project to marketize education uses scores from standardized tests to evaluate teachers, tweaked to allow for differences in students’ characteristics in what is called “value added measures.”

We should have no illusions that these reforms will help all students achieve, the rhetoric that’s used to defend marketization and testing.  In fact, the goal is to “blow up” (Chester Finn’s term) the system of public education created at the turn of the last century. From neoliberalism’s stand point, the system was not sufficiently Darwinian because of increased economic competition. The sorting of those who deserve good jobs and those who don’t has to begin in kindergarten. Parents who are desperate to make sure that their children will be among “the haves” with access to the rapidly diminishing number of good jobs the global economy offers submit their children to many practices that advantaged parents may not be willing to permit.

I want to caution that how kids learn and should be taught is not universal. I think that some white progressives are too quick to dismiss differences in teaching and learning that are related to cultural expectations, and I urge that we acknowledge that good teachers and parents can disagree about what works for kids, as older kids will disagree among themselves. There are, however, certain ground rules we have to insist upon, like behaviors that show we respect one another. As a teacher and teacher educator I think that respect is clearly missing in Success Academy’s practice of shaming low achievers by posting their scores to be seen by classmates and making their lives “misery.” I would urge parents not to send their children to a school that uses these practices. Respect is also missing in classrooms making poor kids of color obedient to teachers’ control of every bodily function, as occurs in prisons – preparation for what awaits students who don’t respond positively enough to the tactics of “champion” teachers who follow this prescription for good teaching. 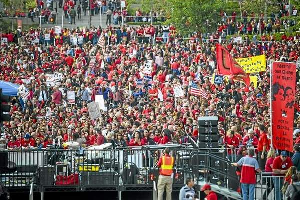 Older teachers are often not considered “champions” because they have ideas borne of experience and education about how schools should operate, how they and students should be supported. They want wages sufficient to support a family and working conditions that allow them to spend time with their own children. They are “costly” not only in salary but in their potential, in their unions, collectively to challenge the authoritarianism that pervades schools.

An essential aspect of persuading parents to see alternatives to the dog-eat-dog competition to which they are told they must submit their children is for unions to do as the Chicago Teachers Union has in its latest contract proposals. The union is using the contract talks to challenge the school district and city about conditions in schools, administrative demands that rob kids of teachers' time, class size, as well as broader political issues of funding and fair taxation. In so doing the union supports parents and the public to see – and join with them in fighting for – a different vision of education, one in which we don’t have schools create a select group of “champions” and toss out the rest as disposable. The union has arrived at these demands through a bottom-up process and brings them to negotiations in a representative team of 50 members. In so doing, it models the democratic relations we need in schools and what teachers unions throughout this country need to do, pronto.

You can follow me on twitter  and  Facebook. If you haven't already, you may want to read my book about The Future of Our Schools.  If you’re in Chicago April 17-20, you can join researchers looking at what’s happening in teacher unionism. Info on the offerings are in the online program at aera.net, including two panels in which I am participating.

Posted April 8, 2015 Education, Teacher unions by newpolitics
About Author
LOIS WEINER writes widely about education, labor, and politics, specializing in teacher unionism. Her new book looks at lessons for the Left  in capitalism's alteration of work and education, and how teachers and their unions can resist with support to and of movements for social justice.