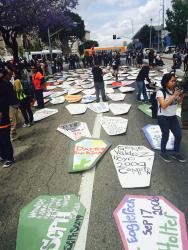 The protestors marched through the streets of Los Angeles on April 7 carrying 617 coffins representing the death of 617 individuals killed by Los Angeles law enforcement since 2000. Participants convened on the L.A. County Board of Supervisors from the north, south, east, and west, staging die-ins at strategic locations along the way. Family members of those murdered along with individuals who have suffered at the hands of the LAPD delivered powerful messages of anger, hope, and sadness, urging the need for continued and escalated community response to LAPD oppression and brutality. 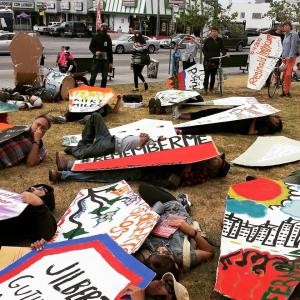 The Youth Justice Coalition, organizers of the event, said that, "At least 617 people have been killed by Los Angeles County law enforcement since 2000 – that’s almost 1 person killed by law enforcement every week in LA. African Americans are 9 percent of LA County’s population but 28% of the people killed by police and sheriffs. Fifty-four percent of those killed are Latino, while the Latino population in LA is 48%. LA County leads the nation BY FAR in law enforcement killings of community members. 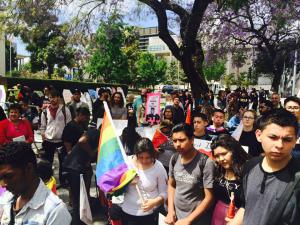 “Since 2000, according the LA County DA’s Office, there has not been a single prosecution in any of these cases. In addition, the DA has reported to us the their office has had an agreement in place since the Cooley administration to not investigate any use of force until the internal investigation conducted by law enforcement has been completed, 6 months to a year after the incident."