It remains to be seen whether NJ Governor Chris Christie will be able to avoid having his political career crash and burn.

Politically-motivated lane closures on approaches to the George Washington Bridge were no playful pranks. Massive traffic jams, incredible disruption to the lives of Fort Lee residents, and delays of emergency vehicles — these are serious matters. Students had difficulty getting to school, but that was OK with a Christie pal who had been appointed by him to the Port Authority who happily noted that these were the "children of Buono voters" (referring to Barbara Buono, Christie's Democratic opponent in the November 2013 gubernatorial election). The traffic tie-ups may even have contributed to the death of a woman whose ambulance was slowed getting to the hospital, but perhaps she was also a Buono voter.

Will Christie be able to avoid responsibility for this criminal behavior? Maybe he didn't know what was being done by his deputy chief of staff, his transition chairperson, his re-election campaign manager whom he had nominated (since withdrawn) to be head of the state GOP, and the high school friend and political confidante whom Christie had appointed along with a political crony to the Port Authority board — though this strains credulity. But it is hard to imagine that anyone watching Christie's months of repeated denials and his stonewalling refusal to look into the matter would absolve him of the charge of covering up a crime.

Christie claims that he had more important things to do than worry about some lane closures. And indeed he has spent most of his time pursuing policies that have had a much more devastating impact on the people of New Jersey. He vetoed a tax on millionaires multiple times, cut property tax rebates for the middle class, and reduced the earned income tax credit that benefited the poor. He vetoed a minimum wage hike (though voters later passed it in a referendum). He illegally abolished the Council on Affordable Housing. He several times vetoed funding for Planned Parenthood, which provides health care for poor women. He vetoed same sex marriage (though the courts later legalized it). He removed New Jersey from the 10-state Regional Greenhouse Gas Initiative. He opposed the Dream Act until the month before the election, then supported it; but then after the election he agreed to sign it only if the legislature made undocumented residents ineligible for financial aid. He vetoed multiple gun control bills, including one that was a version of what he had himself proposed. He cut school funding, in violation of rulings of the State Supreme Court, and responded to criticisms by trying to pack the Court with his cronies and destroy the teachers unions.

The bridge lane closing, though, does raise an interesting question. Why would a Republican governor go to extraordinary lengths to punish a Democratic mayor for not supporting him? Don't Democrats generally not support Republicans? But this is New Jersey, where corrupt party bosses are a major force in the Democratic Party. For these bosses — especially George Norcross, the major power broker in south Jersey and Essex County executive Joseph DiVincenzo — all that matters is their self-interest, political and financial.

The political bosses fund their efforts by directing state contracts to their moneyed supporters. Christie, the so-called corruption-buster, has been all too happy to work with them. The Governor aggressively went after state officials who were getting public employee pensions and a state salary at the same time, but he gave a pass to DiVincenzo, one of the biggest double-dippers of all, who has also been charged with the largest misuse of campaign funds in state history. Norcross was known to be a bully well before the bully Christie came on the scene ("I will fucking destroy you," he snarled at the co-president of the State Senate back in 2002). One of the owners of the Philadelphia Inquirer and the Philadelphia Daily News, Norcross is a political king-maker (an FBI tape-recording overheard him saying “In the end, the McGreeveys, the Corzines," — Democratic governors — "they're all going to be with me. Not because they like me, but because they have no choice”). Christie and the bosses joined forces in order to pass legislation reducing the pensions of public workers, even of those who had already retired. ("I will protect your pensions. Nothing about your pension is going to change when I am governor," Christie had pledged in 2009.)

DiVincenzo, the country executive in the most Democratic county in the state, openly endorsed Christie for governor. Dozens of other Democratic politicians — many of them ethically challenged — also endorsed Christie. One reason was that the Democratic candidate was Barbara Buono, a liberal who was not part of the machine. Buono's positions on the major issues were in line with that of the state's Democratic voters (raise the minimum wage, same-sex marriage, tax millionaires, fund public education), and she even selected a union official from the Communications Workers of America, Milly Silva, as her running mate. But Democratic politicians deserted her in droves, and many others sat on their hands. So when the Democratic mayor of Fort Lee refused to join the collaborators, the Christie administration decided to punish him.

Buono was trounced in the election. But, it was not just the desertion by the Democratic machine that did her in. Obama made clear he wouldn't come to New Jersey to campaign for her, even when he was campaigning nearby. One blogger put it well:

"I think it's a very good thing that Barack Obama is not using his political capital to support Barbara Buono for Governor of New Jersey. I mean, if he did then the Republicans in Congress would get mad and might not vote to support Obamacare or other things Democrats find important.

"But since he's refusing to help a progressive woman in a campaign against a conservative, anti-choice Republican now Obama will be able to get anything through the House he wants.

All the major newspapers in the state — The Star Ledger, Philadelphia Inquirer, Asbury Park Press, Bergen Record, Herald News, and Press of Atlantic City — endorsed Christie. And they did so even though their editorial positions were often closer to Buono's than Christie's on most issues, aside from public workers. "Christie’s great failing has been that he has done little to help New Jersey’s poor," said the Press of Atlantic City. But the programs Buono "proposes make it sound as if we are still back in the free-spending days before the recession. She has yet to learn the tough lesson that New Jersey can no longer afford to fund every worthwhile program." She "is too bound to the public-worker unions to be expected to take the difficult steps necessary to fix" the state's fiscal problems. "We would rather have someone fighting not to increase taxes than a governor willing to capitulate to the demands of special-interest groups," declared the Herald News. The Bergen Record commented that "Buono has spent years advocating for many social causes dear to The Record. But a governor needs more than personal convictions; he or she must be able to achieve results." (No matter that those results were for reactionary policies.)

But it was the Star Ledger that went furthest in exposing Christie's record while endorsing him:

"The property tax burden has grown sharply on his watch. He is hostile to low-income families, raising their tax burden and sabotaging efforts to build affordable housing. He’s been a catastrophe on the environment…. "

"The governor’s claim to have fixed the state’s budget is fraudulent…."

"… he threatened the independence of judges at all levels…."

"The public gives him top marks for his handling of [hurricane] Sandy, but the record is mixed….Why did the federal government have to strong-arm the state to include more relief for renters and Spanish-speakers than Christie had proposed? And why should anyone believe taxpayers got the best price on refuse removal when the governor awarded a no-bid contract through a political friend?" 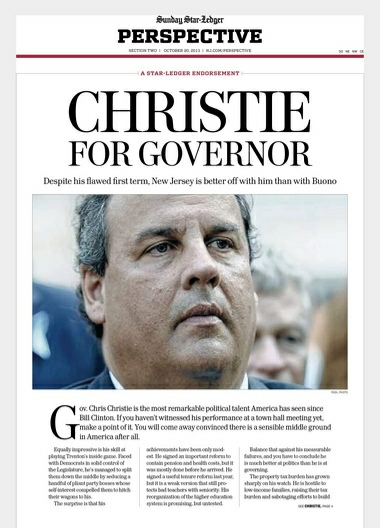 "Buono has long been a sturdy voice for progressive causes. She was a key player in establishing paid family leave, protections against bullying and revamping the school aid formula.

"As governor, she would allow gay couples to marry, raise the minimum wage and stop the baseless attacks on the courts. She would raise taxes on incomes greater than $1 million, and restore at least some of the property tax rebates that Christie cut. She would also restore funding for Planned Parenthood, and sign strong gun legislation. On each of those issues, we are with her."

So what was the problem? Her support for public unions and her education policy, specifically her opposition to the "education reform" agenda of privatization and removing public accountability from schools. The Ledger was quick to point out that

"Understand that President Obama endorses the reforms Christie has pushed. This is not a right-wing conspiracy; it is a bipartisan movement…"

And they're absolutely right. It is bipartisan. Obama and Christie and New Jersey's new senator, Democrat Cory Booker (who did endorse Buono) are all part of a movement, heavily backed by billionaires like Eli Broad and Mark Zuckerberg, to undermine public education. In New Jersey cities such as Newark and Camden and suburbs such as Montclair and Highland Park, a battle is raging between the corporate "reformers" and grassroots movements trying to resist their onslaught. These cities and suburbs all vote heavily Democratic, but their school systems are being run by people connected to the Christie administration.

New Jersey's current Democratic Party, dominated as it is by corrupt bosses and corporate interests, cannot adequately challenge the rightwing program or the bipartisan corporate-driven education agenda. Christie may be toast, but it will take a real grassroots upsurge to offer a genuine alternative to his policies.