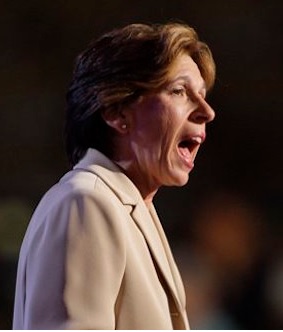 Given what we know from the Podesta emails about Clinton’s refusal to align herself or even give lip service to labor’s campaigns to organize the most exploited workers, Weingarten’s statement rings false.  It fails to acknowledge the clear bankruptcy of her insistence on fashioning union positions so as to maintain personal relationships with Democratic Party insiders and the power elites.

What then should Weingarten have said to AFT members?  The statement she should and can still make follows.

This election has shaken us.  Our most immediate job as teachers is to protect our students, providing hope and nurturing.  As a union of teachers we have already experienced the harmful effects of Trump’s victory. Our members are asking how to work with children of color who are too frightened to think about school;  of Hispanic children who are immigrants or have parents who are immigrants sobbing they will be deported;  of Muslim girls frightened they will be attacked if they respect their religion and cover their heads.  Teachers are asking how to explain the racism, misogyny, and xenophobia that has been unleashed.   They need space and time to share their fears as part of school communities.

But as a union of teachers we must simultaneously prepare ourselves for what comes next, considering resistance to defeat the powerful forces of reaction poised to destroy basic freedoms and rights hard-won by generations of activists that have preceded us.  Donald Trump is no friend of working people and  I have learned we cannot rely on Democrats to protect us.

For this reason, I have reached out to the leadership of our sister union, the National Education Association, to co-sponsor emergency assemblies in each state throughout the country. I will ask locals to hold emergency elections to select representatives who will debate and decide on activities, including member education, public outreach, and direct action. We need to mobilize immediately to protect our students and our rights, as citizens and unionists, as the Trump regime and the Republican government take shape.

The political strategy I created and pushed through the AFT was disastrously misguided.  I sacrificed the union’s legitimacy in my involvement  with the Clinton Foundation as well. For this I apologize to AFT members, who at the union’s urging, worked on behalf of a candidate whose intimate, uncritical relations with the wealthy and powerful repulsed millions of working people suffering the effects of bipartisan economic policies. Clinton’s defeat by a Republican standard-bearer who preyed on the fears and prejudices of white workers was possible because I and other union officials decided we knew what was best for this country, ignoring the right of union members to decide whom to endorse in the Democratic primaries. In the context of a union-wide debate, I should have asked members to endorse the only candidate who put the case for economic equality, for taxing the wealthy, for a truly progressive vision before us – Senator Sanders.  I was wrong, as were the AFT Executive Board Members who endorsed this strategy.

I pledge now to do whatever possible to democratize our union, building the AFT’s strength at the school site, with parents and allies with whom we will work for social justice.  We have much to learn from how the Massachusetts Teachers Association won a stunning victory, stopping billionaires from pushing privatization of public schools by lifting the cap on charter schools.   As we have seen in Chicago and elsewhere in a growing movement for union reform, when the union embraces the ideals of democracy, social justice, and mobilization and has leaders who are willing to organize and fight for principles teachers, kids, and schools create new possibilities for change. This new course will replace the old, comfortable road of asking political “friends” for deals.

The top of my agenda today is to organize a conference call with all elected officers of locals about this new direction I am asking for our union. The day after President-elect Trump is sworn in as President we should be ready for action. This is a battle we intend to fight – and win. Our nation’s children and schools deserve no less.

Lois Weiner, a professor of education at New Jersey City University, is a member of the New Politics editorial board. You can follow her on Twitter, Facebook, and read her blog here on New Politics.

Posted November 10, 2016 Education, Labor, Teacher unions by newpolitics
About Author
LOIS WEINER writes widely about education, labor, and politics, specializing in teacher unionism. Her new book looks at lessons for the Left  in capitalism's alteration of work and education, and how teachers and their unions can resist with support to and of movements for social justice.

7 comments on “Trump’s Victory: What American Federation of Teachers President Weingarten should say”