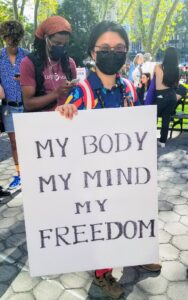 In 650 cities and towns across the United States tens of thousands of women rallied and marched for women’s reproductive rights on Saturday, October 2. This fifth annual women’s march since 2017 took place in reaction to the state of Texas passing a law recently that bans virtually all abortions and it occurred on the eve of the U.S. Supreme Court taking up cases that might lead it to overturn the Roe v. Wade, the case that in 1973 gave women abortion rights. Some participants saw the march as a way to re-launch a militant mass women’s movement.

Many women feel their rights and their futures threatened. As Alexis McGill Johnson, president of Planned Parenthood, explained to a crowd. in Washington, D.C, “This year alone we have seen nearly 600 restrictions in 47 states. So no matter where you live, no matter where you are, this fight is at your doorstep.” 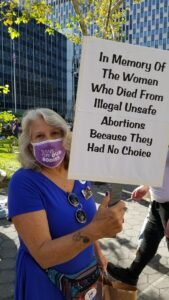 Sponsored by over 200 women’s rights and liberal organizations such as Planned Parenthood, the National Organization for Women, and the American Civil Liberties Union, but also mobilizing scores of smaller local groups, in big cities and small towns women of all ages and their male and other gender allies chanted, “My body, my choice.” Demonstrators displayed signs that with wit and sarcasm expressed their frustration. One sign read, “If men got pregnant, abortion would be legal everywhere.” Another said, “Mandatory vasectomies. Come on guys, let’s save lives.” And another mocking biblical language, “He who hath no vagina should just STFU [shut the fuck up].

Politicians or candidates for the 2022 elections were speakers at rallies around the country talked about the need to elect more progressive Democrats to Congress to defend abortion rights. New York Governor Kathy Hochul speaking in Albany, the state capital, told a crowd, “As your first female governor ever in the State of New York, I will protect those rights.” She added, “together we’ll send a message across this nation—you come to New York, we’ll protect your abortion rights every single day of the week.” Rana Abdelhamid, the child of Egyptian Muslim immigrants and progressive candidate for Congress from New York City, told the rally there of her support for abortion rights especially for immigrants. 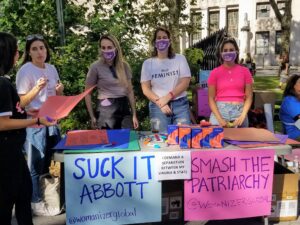 In New York City where my wife and I marched, the rally began with demonstrators chanting, “Black Lives Matter.” Rose Baseil Massa, an organizer for March for Abortion Justice, told the crowd, “We know that Brown and Black people, Hispanic and Latinx populations and indigenous populations, they are all disproportionately affected by abortion bans. So it’s really important for us to stand here in solidarity.” The notion of solidarity with people of color was a central theme, though the protest n New York City, where whites are a minority, was overwhelmingly white, with few Black women present.

Women made up 70 percent of the participants in New York City, some of them veterans of the women’s movement of the 1960s and 70s, but mostly younger women, some new to the movement. The politics of the march in NYC were progressive, with a strong presence of Democratic organizations, such as Indivisible and several independent Democratic clubs. Some women carried signs such as, “RBG sent me,” a reference to the recently deceased liberal Supreme Court justice Ruth Bader Ginsburg. There were a couple of leftist organizations present, Maoist and Trotskyist, but they represented a tiny minority. The Democratic Socialists of America, the country’s largest group, had no visible presence here. 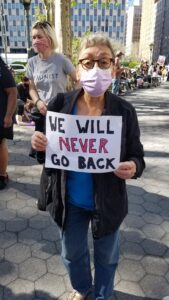 In Asheville, North Carolina Tessa Paul, local DSA co-chair, told a rally, “We are gathered here today because there is a war being waged. This is a war against women’s reproductive rights, against trans and nonbinary people, against Black and Brown people, against indigenous, queer, disabled, displaced and abused people.” There is a war, but women have begun to fight back and we stand with them.

[All photos here taken at the NYC march by the author.]