Austerity, Collapse, and the  Rise of the Radical Left in Greece

This article and its title are based on a presentation made at the Mapping Socialist Strategies Conference, hosted by the Rosa Luxemburg Stiftung–New York Office at the Edith Macy Conference Center, New York, August 1-4, 2014.

Brazil: Lula, Rousseff, and the Workers Party Establishment in Power

Dilma Rousseff of the Workers Party (PT) won Brazil’s presidential election on October 26, meaning that when her term ends her party will have held the nation’s top office for a remarkable 16 years, longer than any party in Brazilian history. 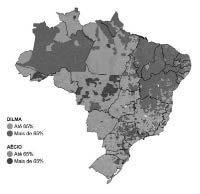 Election day came lazily in Santarém, a mid-sized city and trading entrepôt at the junction of the Amazon and Tapajós rivers, the halfway point between Amazônia’s primary metropolises of Manaus and Belém. The internet was out of service in this sleepy Amazonian town, as were two out of the four major cellphone carriers, and the streets were nearly empty.

Towards a Transformational Strategy

We are living in times of great instability and crisis. Everywhere there are troubling signs of collapse: mass shootings, widespread unemployment, potentially irreversible ecological devastation, and the consolidation of wealth into fewer and fewer hands.

In the first days of August 2014, the Rosa Luxemburg Stiftung—New York Office brought together one hundred influential leftists from across the United States, Canada, and Europe for an “un-conference” on socialist strategies. The retreat was held at the Edith Macy Center, located in Westchester County about an hour north of New York City.

The Left Unity Project of Britain

The origins of the Left Unity project came out of the common struggle across Europe against austerity. The specific moment was the first coordinated general strike across Europe on November 14, 2012. Many of us active on the left, already working with the anti-austerity movement across Europe, saw the need for British engagement too, and from that day onwards, Left Unity has been in development.

An ISO View of the Future of the Left

The fate of the socialist left is tied to that of the working class movement—and the last four decades of one-sided class war have had dire consequences for both. The thread linking today’s generation of young workers to U.S. labor’s proud history of class struggle has been effectively broken and must be developed anew. This is a daunting but necessary task for rebuilding the working-class movement.