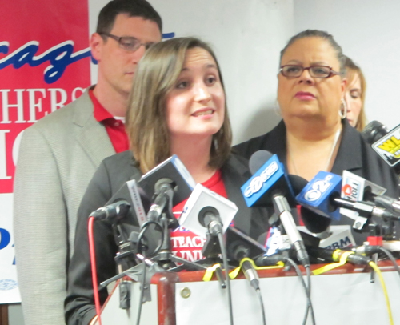 Now Chicago Public Schools (CPS) has accused her of encouraging student to opt out of the PARCC Test, a wholly unsubstantiated charge.  While Sarah has long been a proponent of promoting critical thinking over drill-and-kill standardized testing, her advocacy has always been directed at consciousness raising among her colleagues to help change policy, not telling kids what to do about the tests. It is clear that CPS has suspended her and is moving to fire her for her courageous advocacy on behalf of her students.

We the undersigned demand that the Chicago Public Schools drop their erroneous charges against Sarah Chambers and instead use their resources to better support the social, emotional, and academic development of Chicago students.

Celebrate national teacher appreciation day today by supporting one of the true champions of social justice education in the country! Help Sarah today by sharing this statement on social media and by signing the online petition.

Journey for Justice (J4J)
An alliance of grassroots community, youth, and parent-led organizations in 24 cities across the country

Jose Luis Vilson
Author, This is Not a Test
Executive Director of EduColor

(This statement also appears on the blog of teacher and education activist Jesse Hagopian.)

Posted May 9, 2017 Education, Teacher unions by newpolitics
About Author
LOIS WEINER writes widely about education, labor, and politics, specializing in teacher unionism. Her new book looks at lessons for the Left  in capitalism's alteration of work and education, and how teachers and their unions can resist with support to and of movements for social justice.