A snapshot you won't see in the media 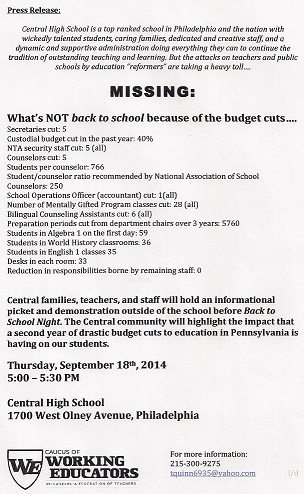 I’ve written about a new wave of reform in teachers unions  that’s still under the radar of the corporate media and much of the Left press.  It’s hard for these caucuses to get media attention, which is understandable when the outlets are owned by Rupert Murdoch or the like. They have no interest in publicizing teachers’ efforts to replace the tired, unsuccessful business unionism that dominates with a vibrant, democratic social movement.  The mainstream Left media’s confusion about education reform is another story, one I explain elsewhere.  One effect of the media ignoring these growing grassroots efforts is that activists can feel isolated.

To illustrate what’s happening in many, many places, I’m posting a flyer being distributed in Philadelphia high school. In forming a caucus based on principles of social justice, committed to union democracy and a militant fight for the teaching profession and public education along with parent, student, and community allies, activists create the nucleus of a different kind of union.  They prepare themselves to be a different kind of leadership of a different kind of union. This kind of organizing is typical of what CORE (Caucus of Rank and File Educators) did – and does – in Chicago. It’s a model that has inspired teachers and labor activists around the world.  This process has to take on the union apparatus but it’s rooted in each school where teachers build trust and develop networks. This flyer gives us a snapshot of the process happening in Central High School and in Philadelphia.

Union officials are responding to this new movement by adopting a more militant tone in their speeches and taking positions on social justice concerns that were previously taboo.  These shifts show the new movement is having a significant impact on the unions, and we should welcome them – while realizing that a mobilized membership and a democratic union are the essentials we need to build the unions we must have, pronto.

Posted September 17, 2014 Education, Labor, Teacher unions by Lois Weiner
About Author
LOIS WEINER writes widely about education, labor, and politics, specializing in teacher unionism. Her new book looks at lessons for the Left  in capitalism's alteration of work and education, and how teachers and their unions can resist with support to and of movements for social justice.