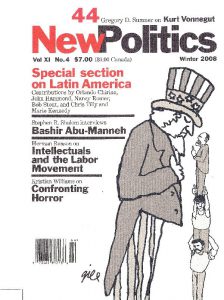 END_OF_DOCUMENT_TOKEN_TO_BE_REPLACED

EMIR SADER EMBODIES, to the extent any one person can, the trajectory of Latin America’s left movements. A Marxist sociologist with a long track record of studying Latin American politics, currently Executive Secretary of the Latin American Council of Social Sciences (CLACSO), Sader is Brazilian by birth but fled Brazil at the end of the 1960s as the dictatorship tightened its grip. In Chile, he then participated in the electoral path to socialism preached by Salvador Allende’s Popular Unity government, until the 1973 coup forced him to flee again.

LEFTISTS WON PRESIDENTIAL ELECTIONS IN 2006 across Latin America: starting (at the end of 2005) with the stunning victory of Evo Morales in Bolivia, through the election of Socialist Michele Bachelet in Chile, the predictable reelection of Lula in Brazil and Hugo Chàvez in Venezuela (though Lula, winning less than 50 percent of the vote in the first round, was forced into a runoff), and the runoff victory of Rafael Correa in Ecuador.

IMMIGRATION HAS BECOME THE MOST DIVISIVE ISSUE in domestic American politics since civil rights. Not for the first time in American history, immigrants have become scapegoats for many of the real problems of America's middle and working classes.

America's soft power dysfunctions: When Arab problems are allowed to wash up on American shores

Our political organization is thoroughly rotten, almost non-existent. It is Carthagian… Never was there such an absurd waste of power, such ridiculous inconsequence of policy—not for want of men but for want of any effective central authority or dominant idea to make them work together.

I DID NOT DREAM OF BEING TORTURED.

But I did dream of being caged, of being bound and blindfolded, of being kept cold and naked in a small steel box. I dreamed of terrible footsteps, always approaching, and the chilling sound of metal clanging against metal. I dreamed of endless screams, and of shadows that stretched toward me, and of hands holding instruments that I could never quite see.

The dreams ended, always, before the pain could become real. But that is a small matter. The fear was real enough.

The Question of Palestine

New Politics: 2008 is the sixtieth anniversary of the founding of Israel and of the Nakba, the Palestinian catastrophe. What do you see as the Israeli goal and has it changed over the years?