ROBERT JOE STOUT has written about Mexico for a variety of publications, including Commonweal, American Educator, and Notre Dame Magazine. He was a member of two Rights Action emergency human rights delegations to Oaxaca and witnessed many of the events described. His books include The Blood of the Serpent: Mexican Lives and Why Immigrants Come to America, due out this fall from Praeger. 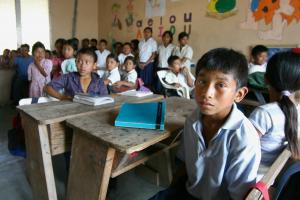 Like many countries trying to wedge their way into economic prosperity Mexico has affirmed an emphasis on education but in practice has negated its importance. Recently passed constitutional reforms relegate educators to temporary employment controlled by the federal government and private investors who have little or no interest in universal coverage or academic excellence.  A huge portion of federal money designed for education goes to administrative personnel and is not subject to audit.

"According to information supplied by members of the military high command in 1994, President Salinas already had given orders for a massive military move into Chiapas to root out and destroy the insurgents, but was dissuaded by the United States Embassy and some of his own governmental advisors because Subcomandante Marcos had become a charismatic figure worldwide and Mexico could not afford the negative publicity that crushing the movement would create.

Uniformed agents of Mexico’s Federal Investigative Agency (AFI for its initials in Spanish) yanked three inmates out of their cells in the minimum-security state prison at Ixcotel, Oaxaca in November, 2008 and transported them to San Bartola Coyotepec, another Oaxaca state prison, for "interrogation." One of the three inmates, Victor Hugo Martínez, told activist friends that the federal investigators beat him and threatened to "make your family pay" if he didn’t confess in full to crimes of which he’