Duking it out with Weingarten on Common Core 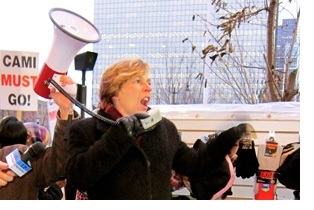 One of the most confusing aspects of the last decade’s education reforms is that a reform that will do great harm often contains an element that’s useful, even progressive.  The reforms are crafted to seduce liberals with this combination of a carrot and grand rhetoric about the intention of increasing educational opportunity.  Testing was sold to liberals as a way to hold schools accountable.  Now a national curriculum, the Common Core, is being peddled as essential to give all students the rigorous education (they love that word “rigorous”) they need to compete in a global economy in the 21st century.

We should have learned by now that we can't be seduced by the carrots or the rhetoric.  Yet, here goes Randi Weingarten, President of the American Federation of Teachers, doing exactly that.  Weingarten is being battered on social media for allying with the Business Roundtable to urge acceptance of the Common Core, which is opposed by activist teachers and parents on the Left as well as by elements of the far-right, in particular the Heritage Foundation.

The Washington Post article practically chortled about Weingarten's jump into bed with the union's foes: “The head of the country’s second-largest teachers union and a business leader who tried to weaken unions as a onetime governor of Michigan have made a joint plea to the nation’s governors to stand by the controversial Common Core academic standards.”

Weingarten has endorsed the Common Core in her capacity as union president, speaking on behalf  ofAFT members without this issue having been given the vigorous debate and vote it needs. She has no right to do that and should be called on it.  In allying the union with the forces who aim to destroy public education and teachers unions, she is strengthening them and weakening us.  She is betraying the union’s democratic ideals – and no, the poll the AFT has commissioned cannot substitute for debate and votes, at the local level. Support for the Common Core is disorienting activists, teachers and parents alike, many of whom who are still not totally convinced the union is a trustworthy ally.

At the same time, we need to acknowledge that union honchos/honchas can get away with this kind of behavior because members allow it.  We have to acknowledge that many union members, though angry, are frightened and passive. They’re waiting for “the union” to protect them. If every member of the AFT Executive Council told Weingarten they would resign unless she pulled back on the Common Core and repudiated linking teacher evaluations to students’ standardized test scores, she would retract her positions.  But AFT Executive Committee members, who are presidents of key locals, don’t do that.  They too are frightened and are used to being told what’s possible for the union to do.

The AFT and NEA will be as democratic and militant in defense of public education, the profession of teaching, and our students as we make it.  By all means,  duel with Weingarten on twitter for her perfidy. But don’t let this replace organizing in the schools, talking with colleagues about what we can do, together, to make our unions live up to their responsibility.

Posted December 25, 2013 Education, Teacher unions by newpolitics
About Author
LOIS WEINER writes widely about education, labor, and politics, specializing in teacher unionism. Her new book looks at lessons for the Left  in capitalism's alteration of work and education, and how teachers and their unions can resist with support to and of movements for social justice.