Climate change and Republican policies combined in Texas last week to produce a disaster that left millions without power, without heat, and without water as temperatures fell below freezing and snow and ice covered the state, leaving at least 50 dead. The state’s rare severe cold is another example of the extreme weather in the form of floods and forest fires that climate change has brought to the United States.

Twenty years ago, Republicans took over Texas’ governorship, house, and senate and then deregulated and neglected the state’s energy systems, leading to this catastrophe. Governor Greg Abbott and other Republicans, whose party is fueled by the state’s oil and gas industry, have blamed the crisis on the failure of wind turbines and now warn that New York Congresswomen Alexandra Ocasio Cortez, her Green New Deal, and wind turbines will destroy the state’s economy.

Texas, which is almost 25 percent larger than France, has a diverse population of 29 million, 40 percent white, 40 percent Latino, 13 percent Black, and 5 percent Asian. The state’s economy is dominated by the production of oil and gas and Texas is the country’s biggest producer. The state’s petroleum and financial billionaires, led by Midland Energy, have bankrolled the Republican Party both in the state and nationally. The combination of an economy based on oil and Republican Party politics has meant climate change denial together with deregulation and irresponsibility.

Temperatures in Texas in February usually vary between 60 and 70 degrees, but last week after the Polar Vortex sloped down over the United States, Houston had temperatures of 17° and Dallas reached a low of 4° on February 15, the lowest temperatures in about 30 years. Electrical, heating, and water systems failed in houses, health clinics, and hospitals. Medical clinics couldn’t give patients their dialysis treatments, while the storms interrupted COVID vaccinations. The state’s vast ranches and farms lost animals and crops worth billions. As water pipes burst in homes, ice cycles formed on lamps and fans on the ceilings. How could it happen? 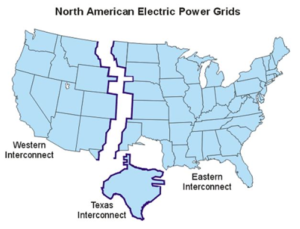 Texas is the only continental state that has its own power grid; all of the others belong to the Eastern or Western Interconnects, which gives them greater capacity to respond to energy demands. The state’s energy comes from several sources: 46 percent natural gas, 23 percent wind; 18 percent coal, and 11 percent nuclear. Faced with the freeze, the state’s electrical grid, managed by the Electric Reliability Council of Texas (ERCOT), failed. Politicians created and maintained the Texas Interconnect and its manager ERCOT, to avoid federal regulation. The state had been warned back in 2011 that the system needed to be upgraded to deal with colder weather, but ERCOT failed to do so. The wind turbines failed because of the state government’s failure to winterize them.

As the crisis unfolded, one of Texas’ leading Republican politicians, Senator Ted Cruz, left the state to fly with his wife and children to a warm luxury resort in Cancún, Mexico. Other travelers took photos of Cruz in the airport and on the plane, posted them on social media, and they went viral, leading to a public outcry. Cruz bought a return ticket and came back the next day.

The failure of the Texas energy system comes in the wake of the state’s poor handling of the coronavirus. Since the beginning of the pandemic, Texas has had 41,981 deaths; second after California, among the half-million deaths nationally. After initial shutdowns, Governor Abbott reopened the state and, yielding to Evangelical Christian, permitted church services to continue, and soon Texas became the first state to reach one million cases.

The abject failure of the Texas Republican Party to deal with both the COVID pandemic and the energy crisis could lay the basis for a political shift that would allow the Democrats to retake state government. Texas Democrats support a Green New Deal and strict regulation of gas and oil companies, but it will take a fight by progressive and socialists to advance such an agenda and make it happen.