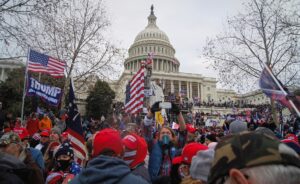 President Donald Trump incited the insurrection at the Capitol that accompanied the attempted coup of January 6, 2021. Photo by Tyler Merbler.

On January 6, the anniversary of the insurrection and attempted coup at the U.S. Capitol, President Joseph Biden spoke out strongly against former president Donald Trump’s “big lie” and the Republican Party’s anti-democratic state voting laws, his first such strong speech since taking office.

We now know that Trump and the Republican Party had a plan to have their senators vote to reject state election returns in several states and to have Vice-President Mike Pence refuse the state’s electors, which would send the election to the House of Representatives. At the same time, President Trump would declare a national emergency to prevent the election from going forward. Meanwhile, far-right groups organized the violent assault on the U.S. Capitol. While the coup plots failed, they represented a serious attempt.

But the rise of rightwing politics and authoritarianism and of armed groups preparing for violent action is an even greater problem than Biden’s speech suggests and neither mainstream Democrats, nor progressives, nor the left, seems to have a strategy to stop the rise of the right. The last several years have engendered a complex, multi-faceted far-right movement active in government at all levels, in the news media, the social media, and the streets. There is now big money backing rightwing politicians and organizations and middle-class business owners and professionals as well as parts of the working class support them.

Trump controls the Republican Party and only a handful of Republicans dare oppose him. The Republicans now have several mini-Trumps and the party is riddled with far-right ideologues. The party is growing and its rank and file, tens of millions of voters, support Trump. Two-thirds of Republicans believe that Biden won the election through fraud, and most refuse to accept the results. Trump’s party controls the U.S. Supreme Court, half of the Senate, a large minority in the House; in almost half of the states there is a Republican governor as well as Republican majorities in both houses. This allows the Republicans to control redistricting, the redrawing of the electoral maps following the decennial census, and to pass election laws to suppress the vote. Republicans have passed dozens of laws making it more difficult to vote, laws that most affect Black voters, young voters, and low-income voters, a majority of whom vote Democrat. Eight states now have laws that give the state legislature power to overturn the election.

The Democratic Party response to these developments is a federal Freedom to Vote Act, but it seems unlikely that Congress will pass it.

At the local level, far-right groups, including the Proud Boys, Oath Keepers, Three Percenters, and paramilitary militias, organize protests at school board and city council meetings. Together with Q-Anon supporters, white Evangelical Christians, and anti-vaxxers they opposed vaccination or mask mandates, and along with white nationalists they oppose “critical race theory,” which mans any teaching about the history and nature of racism in America. Some members of these groups are running for local office or for Congress. Right-wingers are also organizing to ban books from schools and public libraries, some have proposed that hundreds of books be banned, mostly books dealing with race, gender, and sexuality, many by Latino, Black, gay, or trans authors.

The U.S. labor movements has no strategy whatsoever to deal with the far rights, beyond voting Democrat. The Democratic Socialists of America, the country’s largest socialist group, works to resist the right by electing more progressive Democrats, but those congresspeople and state legislators represent only a tiny minority. The anarchist left advocates building the anti-fascist movement to confront the far-right in the streets, but at this point few Americans on the left will take up a plan that inevitably leads to violence. The left must involve itself in campaigns to defend the vote as well as in the social movements and workers’ struggles, challenging rightwing ideology and demagogy and offering a democratic and socialist alternative.