Biden Should Drop Out Amid Credible Assault Allegation

I just listened to former Senate aide Tara Reade vividly, calmly, and tearfully recount how the presumed Democratic presidential nominee Joe Biden nonconsensually penetrated her with his fingers. Reade was a staff assistant to Biden in 1993 at the time. Although she did not publicly report the assault until earlier this week, she described it privately at the time to her brother, friend, and late mother. Her brother and friend each confirmed to The Intercept that they’d heard about the assault. Biden’s campaign has responded to Reade, “these accusations are false.”

Having listened to her testimony and read that it’s corroborated, I believe Reade. And although Reade didn’t use the word “rape,” it clearly applies, including when using the government’s definition. Since there is now strong reason to believe Biden raped a woman, nominating him as the Democrats’ presidential candidate would be a major symbolic setback to women’s rights. The abundant evidence of Biden’s past sexual harassment provides even more reason not to nominate him. Therefore, I want to apply the principles of the #MeToo movement that Biden and other Democrats have themselves endorsed. We should believe Biden’s accusers including Reade, and we should call for Biden to drop out. 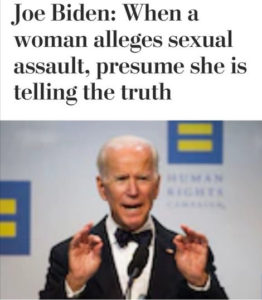 Reade is one of eight women who testified last spring that Biden had harassed them. They said that Biden used to nonconsensually sniff their hair, kiss their heads, press his forehead to theirs, squeeze their shoulders, put his hands on their thighs, and run his hand down their backs and necks. Reade says that public backlash last year stopped her from coming forward with the rest of her story, involving the assault. Biden did not apologize to the eight women he allegedly harassed. He has even laughed off the issue, by hugging a union president and jokingly telling the audience he’d had permission. To survivors, this is not a laughing matter.

This record does not prove that he assaulted Reade, but it shows a pattern of Biden consistently disrespecting women. Even before the latest allegation, this was reason enough to oppose giving him the presidency with which he’d hold power over many millions of American women and, due to Washington’s position in global affairs, over women around the world.

So far, the corporate media, with the exception of Newsweek, has entirely ignored Reade’s allegation of assault. As of Saturday afternoon, the New York Times has still not reported it. Nor has CNN. A pro-Biden bias is one reason, but I think another reason involves a sexist refusal to take women’s claims seriously. After all, it’s hard to imagine news outlets outright ignoring the story in a world that had a tendency to trust women. At the very least, they would give Reade a sympathetic and thorough hearing.

The #MeToo movement has started to change popular and political culture by championing an elementary yet essential notion: When a woman risks her reputation and career to report being sexually harassed or assaulted by a powerful man, she is probably telling the truth. #MeToo has publicized how common sexual harassment and assault are in the United States. Some 81% of women say they have been harassed and 27% say they’ve been assaulted. The movement has also convincingly argued that false allegations of rape are exceedingly rare, between 2 and 10% according to a 2010 study and the FBI.

The movement asserts that while presumption of innocence makes sense in a courtroom setting, it shouldn’t necessarily be applied in questions of whether to keep an elite man in a position of power or offer him such a position. After all, an ordinary person isn’t “presumed innocent” during a job interview, and neither should a very powerful man. Thus in 2018, #MeToo advocates opposed the nomination to the Supreme Court of Brett Kavanaugh who was accused of sexual assault by Christine Blasey Ford. They argued that to nominate him would send a dangerous message that the country was tolerant of Kavanaugh’s past sexual violence.

Biden has repeatedly claimed to support the philosophy of believing women. He said in 2018, referring to Ford, “For a woman to come forward in the glaring lights of focus, nationally, you’ve got to start off with the presumption that at least the essence of what she’s talking about is real.” So to believe Reade is to follow a guideline that even Biden has endorsed.

Some of Biden’s supporters on social media have smeared Reade as being a Russian puppet, but this accusation is not convincing. Yes, it’s unfortunate that as recently as 2018 Reade expressed written support for Vladimir Putin, and that she chose to go public about the assault on the podcast of the often unreliable Katie Halper (who has hosted the Assadist conspiracy theorist Max Blumenthal). Still, taking sexual assault allegations seriously should of course not depend on the accuser’s politics. To dismiss Reade’s account based on her or Halper’s politics is not only to commit ad hominem and guilt-by-association fallacies but also to ignore various relevant facts.

Firstly, several of Reade’s political positions (shared in her interview with Halper) don’t fit the party line of either Moscow or the “Bernie Bros.” These include her view that Obama was a “great” president, her support for Clinton over Trump in 2016, and her recent support for Elizabeth Warren over Sanders in the 2020 Democratic primary.

Secondly, Reade has altered her previous pro-Putin views. Vox reports, “She she no longer feels the same way about Putin since learning more about domestic violence in Russia.”

Thirdly, the unfortunate truth is that Reade’s pro-Putin views are fairly common across the U.S. political spectrum and thus don’t suggest an actual connection to Moscow. Reade wrote her 2018 article in an atmosphere where many on the Left, Right, and center take a “pseudo anti-imperialist” perspective that criticizes U.S. imperialism but overlooks Russian and Chinese imperialism. Reade describes being influenced at the time by Noam Chomsky. While Chomsky is very far from the worst, he has been fairly criticized for his often singular focus on the U.S. that overlooks Russia’s crimes.

Of course, Reade and other women, nonbinary and trans folks, and survivors should play the leading role in formulating demands and strategies for holding Biden accountable and resisting heteropatriarchy. And people need to consider the candidates’ overall records and platforms when deciding for whom to vote. That said, I want to offer support for the demand made by women across the country that #BidenDropOut. Despite an absence of media coverage of Reade’s allegation, the hashtags #IBelieveTara and #TimesUpBiden trended on Twitter this past week. I recommend reading many of the moving “tweets” empathizing with Reade and calling for new paths forward.

Although political commentators have claimed the Democratic Party primary is effectively over, the truth is that half of the states haven’t yet voted and Biden’s lead over Sanders is still relatively thin. While Biden has 1168 delegates and Sanders has 884, some 1775 delegates still remain.

Supporters of #MeToo should call for Biden to drop out, just as they did to Kavanaugh during 2018’s Supreme Court nomination hearings. If Biden doesn’t quit, then Democratic voters should send him packing during the remainder of the primaries. And if the Democrats do nominate Biden, then Americans should consider alternatives to voting for either of the accused sexual assailants Biden and Trump, such as boycotting the polls or supporting a third party at least in “safe states.”

I respect that if Biden were to drop out, there would be debate over subsequent steps, such as whether the nomination should go to the second-place contender Sanders (who has personally faced no harassment allegations and has apologized for harassment among his 2016 campaign staff) or to someone else altogether (such as a “unity” candidate like the more centrist Elizabeth Warren who has also faced no such allegations). But those are questions best discussed elsewhere. Let’s show Biden the door and then vigorously debate what comes next.

Posted March 29, 2020 Electoral Politics, Gender & Gender Politics, United States by Dan Fischer
About Author
Dan Fischer is a volunteer with Food Not Bombs and New Politics. He can be reached at dfischer@riseup.net.

One comment on “Biden Should Drop Out Amid Credible Assault Allegation”