The Coronavirus Strikes and their Significance, So Far 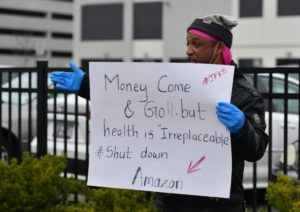 Across the United States we are seeing workers walk off the job in wildcat strikes in response to the employers’ failure either to shut down the workplace or to make it safe. The strikes are too few to call them a strike wave, but we should be aware that on their own initiative workers are taking what practically is the most powerful action they can: withdrawing their labor. The strikes are taking place in both the private and public sector, in both unionized and non-union workplaces large and small.

For 150 years workers have struck over safety and health in myriad industries, most memorably in the twentieth century the miners’ strike over black lung. But we have not seen anything exactly like this before, wildcat strikes over health and safety in response to an epidemic, with workers making strong demands on the employers and sometimes winning. And these strikes are taking place in the midst of politicians’ ignorant and sometimes deceitful statements and government failures at all levels, consequently these strikes—even when only directed at a particular employer—have not only an economic but also a political character.

We’re now seeing such strikes in a variety of industries in several states.

Surely there must be other such strikes and sit-ins that haven’t been covered by the press, and we know there are many other protests by all sorts of workers, particularly important among them teachers and nurses, though we do not include those in this discussion, important as they are. The wildcat strike holds a particular place in the history and theory of the labor movement, as well as today reaction to the bosses and the government during the coronavirus pandemic.

We notice that these strikes involve are both highly skilled and highly paid workers—such as those at the General Dynamics’ Bath shipyard—and also lower paid workers such as those at the Purdue chicken processing plant in Georgia and the bar and restaurant in Portland, Oregon. One can make the case that black workers—Pittsburgh sanitation, Kathleen, Ga., Purdue chick, and Memphis, Teamsters—play a leading role in the strikes. Yet workers at Bath shipyard are overwhelmingly white, while autoworkers are black, Arab, white. No doubt workers of all genders can be found in these protest, and we hear both men and women giving voice to the workers’ concerns. While the central demands are about workers’ health, we can see that already they begin to raise demands about wages, benefits, and working conditions, as well as job security.

What is most extraordinary about these actions is that union officials have not called them. In some cases there is no union. In other cases, such as auto, there is a union and workers are forced to strike against it as well as the company. In certain cases such as the Bath shipyard, it seems that union officials may have tacitly supported the workers’ walkouts, though the situation is unclear. Sometimes these unofficial strikes violate a union’s contractual non-strike provisions or in the case of public employees such walkouts may also violate the law. Yet workers have organized themselves to carry them out with few resources beyond social media and traditional word-of-mouth, in order to protect their health and to save their jobs.

The Two Sides of the Wildcat

Wildcat strikes can be looked upon from two sides. The wildcat strike usually erupts either because there is no union or the union’s leaders have failed to provide leadership to fight the boss. Leftists have sometimes romanticized the wildcat as the authentic expression of the workers’ will, an act that developed spontaneously out of the workers’ resistance to the boss. Some see it as the harbinger of the general strike that will overthrow capitalism and bring the workers to power. At the same time, one has to recognize that workers had to go on a wildcat strike because they hadn’t taken control of their union and couldn’t use the union as the expression of their power. The wildcat is both an expression of workers’ direct power at the point of production, but also a demonstration of their failure—because of the power of the bosses and the labor bureaucracy—to build a democratically controlled union that could express their will.

When workers recognize this, at least in a period of social upheaval, they have in the past sometimes attempted to take power in their unions and turn them into fighting organizations. Wildcat strikes then can become the source of energy that fuels rank-and-file movements, as has been the case in heavy industry of more than century and among public employees for 75 years. The great advance of American workers in the 1930s that led to the founding of the Congress to Industrial Organizations (CIO) and a vast expansion of the American Federation of Labor (AFL) derived from just such wildcat strikes in the rubber plants, the auto industry, among electrical workers and many others. Workers walked out by the thousands, some occupied their plants, while others created mass picket lines, fought scabs and police. Wildcat strikes spread during the depression decade like a virus through the United States, drawing in small industrial shops and retail workers. A similar thing happened in the 1960s and 1970s with teachers and public employees who walked out in illegal strikes to found their unions. Rank-and-file upheavals also transformed the United Mine Workers in the 1970s and shook up other unions as well.

The coronavirus that precipitated the current recession (likely to become a second Great Depression) has become the cause of conflicts between the employers who fight to preserve their businesses and profits and the workers who fight for their health and their lives, for their jobs and their standard of living. We can expect these strikes to continue as the “essential workers,” as their being called, feel their power. As the pandemic—which we should remember is is just now beginning to take off in the United States—expands and as the depth of the economic crisis and its long-term impact becomes clear, the strikes will take on other forms that we cannot foresee.

But we should remember that unemployment, which some see reaching 20 or 25 percent of the workforce, could become a damper on such actions. Historically the rise of unemployment as in 1975 and 1980 has acted to slow or even stop struggles from below such as we are discussing here. Still, if wildcat strikes continue and grow they could propel new rank-and-file movements that rise to seize the leadership of the union and to turn them into fighting organizations of the working class. If that happens on a massive scale, we enter a new era where many other possibilities could appear on the horizon, most important the possibility of independent political action or a working class political party. We should keep our eyes on these wildcat strike movements, support them, hope that they spread and grow, offer our solidarity, and hope that they become movements to democratize the unions and turn them into class struggle organizations fighting for both economic ad political power.

Posted March 31, 2020 Labor, Uncategorized, United States by Dan La Botz
About Author
DAN LA BOTZ is a Brooklyn-based teacher, writer and activist. He is a co-editor of New Politics.

One comment on “The Coronavirus Strikes and their Significance, So Far”