After you win the union election, what next? 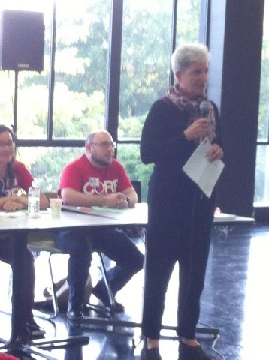 What happens after a social movement/social justice reform caucus wins the union leadership? As we see more victories, we need to consider what changes and why. I was delighted to open a panel that began the convention of CORE, the now-leadership caucus of the Chicago Teachers Union. I think CORE faces some new challenges, which I briefly describe in my remarks.

I’m a teacher educator who was a high school teacher and teacher union activist for 15 years in California and NY. I now coordinate a MA for experienced teachers and research urban education and teachers unions. Some of you may know of me through my book, “The future of our schools.” But what’s most germane to my being here today is that I’m a really big fan of CORE. If you had a fan club, I’d run for president. But before I talk anymore, I’d like those of you who worked in a school today to wave your hand and shout out. I want to thank YOU for coming here, after what was a hard week. Urban teaching is a job and a half. Union work is a job on top of that. Caucus work gets piled on top.  You’re great for being here.

I want to suggest why your work in and for CORE is critical, and propose challenges for CORE that I see based on my research and discussions with teachers unions in the US and elsewhere in the world. As a  caucus vies for leadership of a union, the decisions it makes about its principles and its operation shape the kind of union it creates, the kind of leadership it offers, when it wins elections. The caucus is the new union in embryo. However after that victory, the caucus purpose and importance shift. The caucus remains the voice of a rank and file union leadership but also becomes the institutional conscience of the union apparatus, of the leadership and staff.

This new role is essential because unions experience pressure to mirror the culture of the employer. It’s a fact of life. No union is immune from these influences. The pressures occur because the union is necessarily locked in battle with management, and even a fighting relationship is a relationship. This relationship explains why we find corrupt, gangster unions in industries that are gangster-ridden.  It also explains the pressures on urban teacher unions to become bureaucratic and hierarchical. The union adapts to the employer (school system) culture and assumptions even as it resists them.             No matter how principled, courageous, and strong we are as leaders, we and the organization are subject to conservatizing pressures. Democracy is inefficient; solidarity is difficult to develop; mobilizations take a great deal of time and energy. And leaders are charged with producing results. That’s why they are elected.

In a caucus like CORE that is pledged to union democracy and grew by defending that ideal, caucus members meet as equals. The highest officers have no more power or authority than does a regular union member. Officers and staff bring one perspective and essential knowledge that comes with leadership.  Caucus members, however, bring another perspective and knowledge set: the texture of work and union life in the school.  The job of the caucus is to defend the ideals on which its candidates won office. This is the sense in which it serves as the conscience of the union leadership and staff they hire.

These conditions of equality and the understanding that a union is strongest when members feel that they control the union – and not vice versa- mitigate against the pressures towards hierarchy that unions inevitably experience. In schools, caucus members model this determination and confidence that members are the union. Internally in the caucus, members defend the caucus ideals as they think they should be enacted.

I think the challenge for CORE now is to take the democratic norms and procedures you have made part of union life in two directions: to the schools and to politics. That means organizing members to combat the bullying of administrators in ways that are creative and self-confident.  It also means standing up to the bullying of politicians who think the schools and communities are theirs to run as they wish.  All over the world teachers and their unions have been shut out of the political process. In the US we see this in the way the Democrats answer Republican rivals and exclude our demands from the political process.  The CTU and CORE need to push even harder to create space for teacher, parent, and student voices to be heard and respected in schools. At the same time, you now need to create space in the public sphere, in politics and in the media, for your vision of a different kind of society and school system.

As I see it, CORE’s challenge is to develop a deeper, stronger union presence in the schools, reinforce and extend your connections with community and unions who will struggle, and to take your struggle to the political arena to give people a real alternative to the parties and politicians controlled by wealthy elites. As it meant in confronting the former CTU apparatus and CPS, this process requires a clear commitment to reject politics as usual, including the idea that politicians, no matter how smart or courageous, can replace the actions of our movement.  Expecting politicians acting as individuals to take on the government sets them – and us- up for disappointment and betrayal. The people we elect we be only as strong and principled as they know they must be to have our support.

This is a tall order, but so was transforming the CTU – which you’ve done – and taking on Rahm Emanuel successfully – which you’ve done. CORE has inspired struggles all over this country and the world.  I think you’ve just begun.

Is there a subject you want me to tackle? Let me know. And you can follow me on twitter  Facebook, as well as my blog here at New Politics.

Posted September 22, 2014 Labor, Teacher unions by newpolitics
About Author
LOIS WEINER writes widely about education, labor, and politics, specializing in teacher unionism. Her new book looks at lessons for the Left  in capitalism's alteration of work and education, and how teachers and their unions can resist with support to and of movements for social justice.