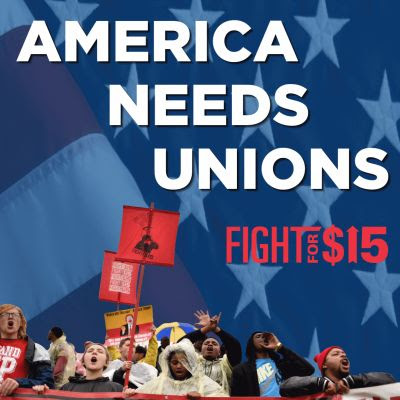 A militant labor movement is essential to sustain and win the hard-fought battles that loom and to create a mass socialist movement that can help create and power an alternative to capitalism’s destruction. Unions can call on the resources of millions of workers, organized at the workplace, in capitalism’s heart. Labor’s potential power, sustained in good part by public employee unions, explains the Right’s stunningly brazen announcement of its plan to destroy government unions and with it, the Left. For the same reasons the Right wants to eliminate the collective voice of workers on the job, we need to defend it: Unionization plants the seeds of democracy on the job, challenging the bosses’ unfettered control.

Being a friend of unions means “showing up” for struggles unions organize for dignity on the job and in the community. Janus v. AFSCME, coming up to the U.S. Supreme Court, may abolish a union’s right to have everyone who benefits from a union’s representation share the cost. Public employee unions are mounting a campaign against it and need our support. The often invisible  job actions, protests, and boycotts unions organize deserve to be publicized. Read Labor Notes to learn about the many struggles ignored by corporate media. Booking a hotel? Check to be sure it’s socially responsible, paying its workers, often immigrant women, a living wage with benefits. On campus? Help graduate students who are organizing unions to win a contract. The U.S. Chamber of Commerce calls a $15 hourly wage inflated. Unions call it a bottom line for the country that is the richest the world has ever seen. Help the unions fighting for these low-wage workers hyper-exploited by corporations and billionaires who are dismantling legal protections. Inquire when you see workers on a picket line. Ask the workers about the issues, find out what you can do to help – and do it. Every picket line is a chance for us to educate ourselves about what unions do to protect workers’ dignity.

Labor sorely needs friends now. Kim Moody explains why labor is in big trouble and worse is likely in store: Union membership is down again, having dropped another quarter-million members from 2015 to 2016, to 14.6 million members. The Right’s attacks on collective bargaining for public employees have had their effect. But Moody also proposes what labor can and should do differently to defeat the onslaught against unions and working people. The other part of being a critical friend is frank analysis about what’s not working and why.

Unions are “thin-skinned” about criticism and often resort to a “circle the wagons” strategy when they should learn from mistakes. Union officials can fire staff and suppress internal dissent, but they can’t so easily dismiss supporters. Union members struggling to democratize their unions need our support, and top-down mergers carried out to preserve union resources will make those internal battles all the more important. A key criticism we should make of and to unions is about organized labor’s initial involvement with Trump. Their at-best ambiguous relationship disoriented members who had worked against Trump and undercut credibility and legitimacy with social justice activists who are labor’s natural allies. Though a group of hardy activists protested their unions’ actions, the  Building Trades should have been called out by other unions for embracing Trump, playing footsy with a President who proudly counts on fascists and White supremacists as his base. The AFL-CIO’s resignation from Trump’s manufacturing council should never have been needed. It should never have joined.

There’s no way we can develop a program and mass movement to contest capitalism without taking on labor’s complicity with policies it should oppose. Hurricane Harvey highlights the human cost of capitalism’s climate-change denial. Houston should be rebuilt in a way that supports human needs and the environment, rather than what the big money controlling Trump, the GOP, and many Democrats pushed in New Orleans post-Katrina. To their credit, many unions criticize Trump and help organize much-needed resistance on single policies, notably immigration issues. At the same time they also scurry to cut deals privately, as AFT President Weingarten has done with Trump’s Secretary of Education, Betsy DeVos.

Being a critical friend means being there when you’re needed. The sharper our critique, the stronger should be the support we provide. Step up and speak out! This Labor Day you can help fight capitalism and build socialism by becoming a critical friend to US unions. Help make it the social movement we all need.

Posted September 4, 2017 Labor, United States by newpolitics
About Author
LOIS WEINER writes widely about education, labor, and politics, specializing in teacher unionism. Her new book looks at lessons for the Left  in capitalism's alteration of work and education, and how teachers and their unions can resist with support to and of movements for social justice.