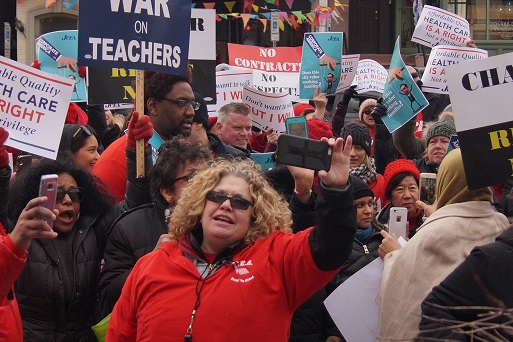 The Right has been able to erode these ideas, through its use of brutal force in breaking unions, its control of the corporate media, and its purchase of politicians in both parties.  Powerful elites have pushed the story that public employees and their unions are selfish, lazy, and care only about themselves, the public be damned.  But public employee unions have handicapped themselves in fighting these attacks, acting as if two decades of right-wing propaganda can be ignored.

The Jersey City teachers are on strike over hikes in health care costs that have cut deeply into their real wages.  Their union, the JCEA (Jersey City Education Association), an affiliate of NJEA (the New Jersey Education Association) has said their struggle is about quality health care being a right. It is. Jersey City teachers have a right to quality, affordable health care. So do residents of Jersey City, many of whom are low-income people of color, who have the same right.  But they don’t have employers that provide affordable health care, and that’s the reason our present system of benefits being linked to employers is morally and politically wrong.  Labor for Single Payer observes “The time has come to take healthcare off the bargaining table by making it a right for everyone in America.”  I hope the JCEA will say this loud and clear: “Public employees are fortunate to have access to healthcare that they/we and everyone else deserves – and we will fight hard for "single payer" so that our students and their parents have what we all need.”  I also hope that in the next contract the union will demand improvements in teaching conditions that directly affect their students.  I know JCEA members care about this. Their union needs to find ways to fight for improvement in the classroom in contract negotiations.

Why support the Jersey City teachers in their strike? First, an injunction has been issued against their strike, demanding they return to work on Monday. This injunction is a violation of a fundamental human right, and for that reason alone we should support the strikers.

Second, the attacks on teachers unions have been orchestrated by the wealthy and powerful to give them control over what our kids learn. By destroying  teachers unions , the Right gets a powerful triple whammy: it weakens public employee unions and labor as a whole;  it removes the most powerful impediment to its dream of destroying school boards and democratic control of public education;  and it removes the obstacle to profits from privatization of  education.

The Right doesn’t want teaching to be a career for our kids. It wants a revolving door of low-paid, minimally trained workers who will teach to tests (tests corporations create and parents and teachers have no power to review or revoke) so as to produce a docile workforce that will not stand up for its rights.

For teaching to be a profession and career, we have to pay salaries that keep people in the job and give them supports to do their job well. Kids who most need experienced teachers are the ones most hurt by teacher “turnover” and “shortages,” conditions that wealthy districts avoid by paying their teachers well and giving kids access to support services.  Though the union itself hasn’t said it, this strike is about the dignity of teaching as a profession, and our obligation to protect teaching as a career.

If residents of Jersey City want children to be taught by people who are knowledgeable, caring, seasoned, and aren’t afraid to speak up when they see something not right in the school, they’ll support Jersey City teachers who are on strike.  I do.

Posted March 16, 2018 Social Policy, Teacher unions by newpolitics
About Author
LOIS WEINER writes widely about education, labor, and politics, specializing in teacher unionism. Her new book looks at lessons for the Left  in capitalism's alteration of work and education, and how teachers and their unions can resist with support to and of movements for social justice.

3 comments on “Why support the strike of Jersey City teachers?”