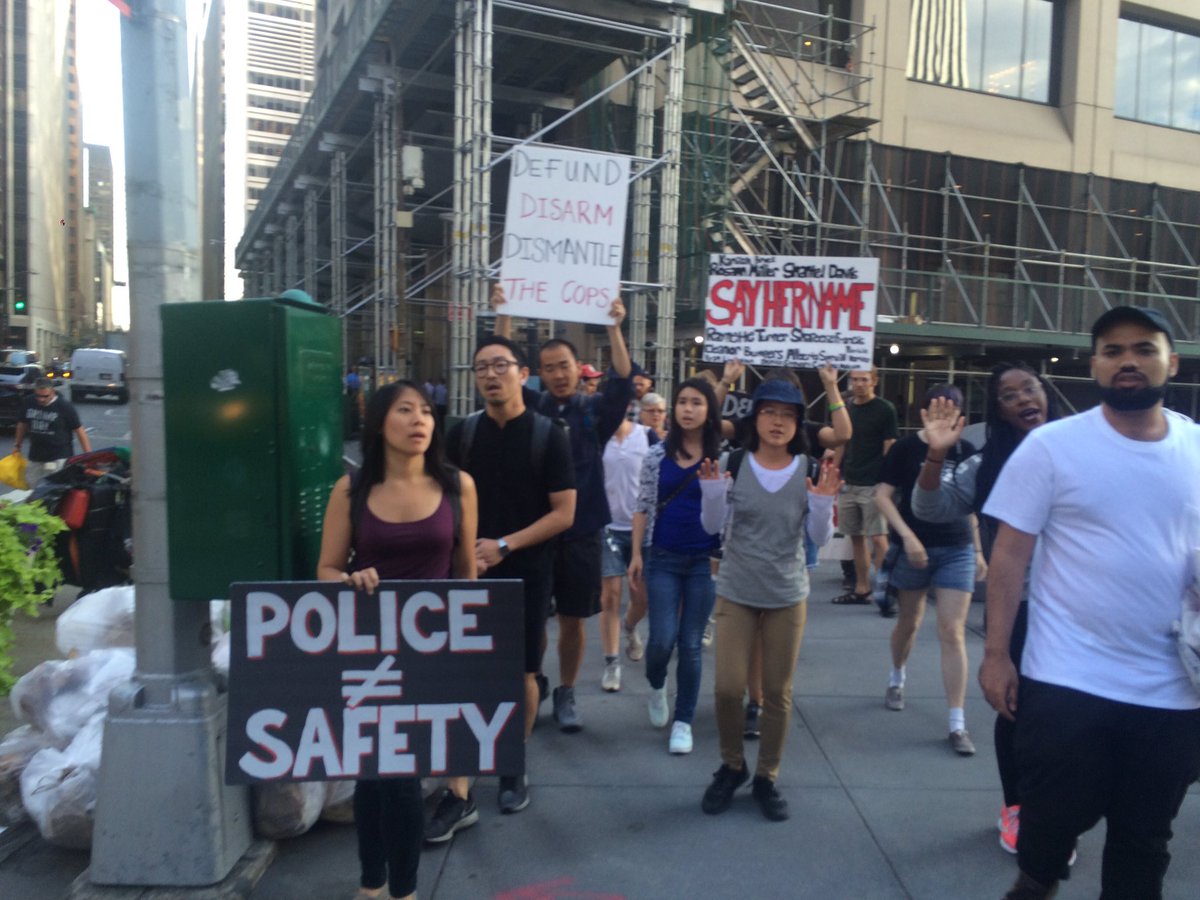 Activists affiliated with the Movement for Black Lives and Black Lives Matter staged a sit-in Wednesday at police union headquarters in Washington, D.C., and New York City, as part of an action to demand police accountability in excessive force cases.

More than a dozen protesters had blocked traffic outside of the Fraternal Order of Police’s legislative offices at Massachusetts Avenue and Fourth Street NE near Stanton Park in Washington, D.C. A similar action was taking place simultaneously at the Patrolman Benevolent Association headquarters at Broad Street near FDR Drive in New York City.

Organizers at the New York action told Mic that police were arresting protesters who had chained themselves together at the PBA building. A spokeswoman for the Black Youth Project 100, a Black Lives Matter-affiliated group, said 10 protesters were in custody at the New York Police Department’s 7th Precinct and were awaiting charges Wednesday afternoon. The NYPD confirmed the arrests but did not provide information on the charges.

The action in Washington, which began around 7 a.m. ET, passed the seven hour mark Wednesday afternoon. Police has not made any arrests, Samantha Master, an organizer for the BYP100 in DC, said in a phone interview.

The actions spurred from a long-held criticism within the movement that police unions protect officers who kill and wound civilians, and ensure that those officers receive paid administrative leave while shooting or excessive force cases are investigated internally.

“The FOP acts like a college fraternity and is responsible for maintaining the harmful, lethal, unethical, and unaccountable culture of policing while the families and communities impacted when officers brutalize civilians are left to mourn with little, if any, semblance of justice. Just like college frats that further rape culture by closing ranks to protect members who are sexual assailants, the FOP has proven that their primary commitment is to protect the worst of their members behind the ‘Blue Wall of Silence’ – even in the most heinous of circumstances. The FOP is the most dangerous fraternity in America and they need to be stopped.”

In New York City, the local BYP100 chapter and Million Hodies NYC attempted to lock down the PBA until New York Police Department leaders agreed to terminate Officer Wayne Isaacs, who fatally shot Delrawn Small on July 4. Isaacs, who had been off-duty when he shot Small, was on administrative leave pending an investigation.