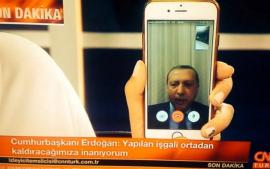 The result of a coup attempt on July 15, 2016, was different—for a variety of reasons. The 1960 takeover was greeted by public demonstrations of support in Istanbul and Ankara; not so in 2016. However much half of the Turkish population may loathe President Recep Tayyip Erdoğan and the ruling Justice and Development Party (AKP), there was little support for yet another antidemocratic military putsch. At Erdoğan’s behest, thousands poured into the streets of the two largest cities, and dramatic images of coup opponents confronting soldiers attest to people’s determination to resist the takeover.

The military faction leading the coup also proved hesitant in contrast to 1980, which was implemented by head of the military Kenan Evren with brutal determination. In 2016, by contrast, top commanders were taken hostage by plotters and the bulk of the armed forces was uninvolved. An awareness of public opposition as well as the ubiquity of the media in contemporary culture seems to have bypassed the hapless plotters, as well. Though a number of media outlets were occupied by troops, instant reports of an air bombing of the parliament and images of popular protest were broadcast across the world. Even the social media-hating Erdoğan took to FaceTime to encourage followers to publicly defy the military.

The plotters, calling themselves the “Peace at Home Committee,” emphasized in early public statements its intention to respect human rights and democracy while claiming the government had violated Turkey’s secular traditions. This is a customary stance taken by coup makers that makes clear their commitment to a Kemalist defense of secular government. While many oppose the Islamist tendencies of the government, equally menacing is the increasingly authoritarian and dictatorial aspirations of Erdoğan—and the exchange of one dictator for another failed to obtain mass appeal in 2016.

Erdoğan immediately accused a “parallel state” under Fethullah Gülen, a conservative cleric residing in Pennsylvania, of being behind the failed putsch. Ironies here abound. Gülen was himself exiled by state forces in 1999, and was for a number of years an ally of Erdoğan and the AKP. While there are ideological differences, both groups share a conservative religious outlook tinged with nationalist Turkish, or neo-Ottomanist, political leanings.

A power struggle between the AKP and Gülenists emerged in 2012, however. The break climaxed in late 2014, when the government blamed accusations against high-level AKP leaders of corruption on Gülen’s followers. Since then, Gülenists in official positions as well as in civilian organizations like the media and universities have been under attack. Indeed, AKP responses to problems that cannot be blamed on the Kurdistan Workers’ Party (PKK) are now reflexively attributed to the parallel state.

While followers of Gülen have unarguably been prominent in the military, police, and judiciary for years, the extent to which Gülen’s Hizmet (meaning “Service”) movement can be blamed for AKP problems, and specifically for a military coup, is fanciful. Gülenists may well have been involved in the putsch, but the notion that the coup attempt was orchestrated from a compound in Pennsylvania defies logic and sense.

Yet the AKP, and Erdoğan in particular, feed off a sense of being besieged, and the idea of traitorous sedition (from foreigners, leftists, Kurds, etc.) has worked to the government’s advantage in the past. Conspiracy theories and the notion of outside forces working to undermine the state have a long tradition in Turkish history, with the current government drawing on fears of internal and external subversion.

Though the defeat of the attempted coup is a hopeful sign that Turkish society rejects military rule as a solution to the nation's problems, Erdoğan has predictably already begun to use the putsch to further consolidate his power and eliminate opponents. As of July 18, 2,700 judges had been detained, 7,850 police officers were fired, and more than 6,000 were arrested. Threatening to end the death penalty for accused traitors (which would end Turkey’s bid for EU membership), the AKP has demanded the U.S. extradite Gülen and vows to “cleanse” the country of Gülenist traitors.

In addition to eliminating perceived enemies on a mass scale, the coup also increases the chances Erdoğan’s desire to change Turkey’s constitution to a presidential, rather than parliamentary, system will succeed. The failed putsch has made the president appear for the moment like an advocate for democratic rule, and he has attempted to maintain popular momentum by calling on supporters to remain in the public squares.

The rapid failure of the coup, and Erdoğan’s dramatic escape from attack while on holiday in Marmaris coupled with his heroic return to Istanbul, will inevitably lead to questions about whether the attempt to overthrow the government was genuine, or whether minor military personnel were tricked into an intentionally doomed escapade. If the AKP can fan paranoid fears of outside subversion, it is only to be expected his opponents will draw similar conclusions in an opposite direction. Gülen himself has vehemently denied involvement and suggested the coup was staged. For many in Turkey, high government and/or military officials provoking chaos and violence for their own personal ends is an old—and not inaccurate—story.

For the Turkish left, already marginalized in the last two years by severe repression and the attempted silencing of dissent, the coup will serve to further isolate critical voices. Critics will be accused either of membership in the PKK or Hizmet, leading to accusations of treason and support for undermining the state. In an important sense, therefore, the post-coup environment will simply be a continuance of recent trends. More ominous, however, have been a number of mob attacks against Alevi and Kurdish neighborhoods in the wake of the failed putsch.

Yet while the AKP government has proven itself remarkably adept at turning domestic unrest to its political advantage, no amount of nationalist propaganda can mask an economic slide that began almost a decade ago. Unemployment, rising prices, and precarious employment continues to plague Turkey, and the contradiction between the government’s populist discourse and neoliberal policies can only coexist for so long.

At the same time, considerable labor militancy has surfaced—and has continued despite the state’s connivance with owners to simply end strikes and force workers back to work. A massive—and successful—wildcat strike by tens of thousands of metal workers against the Renault auto company in the spring of 2015 gave workers a sense of their power at the point of production. After the cosmetics giant Avon fired eight women workers for joining DGD-SEN (the Warehouse, Storehouse, Ship Building and Naval Transportation Workers' Union), workers have been picketing the country with numerous supporters and women’s groups. On June 21, over 900 Nestle workers went on strike—suggestively the labor action is in Bursa, where the wildcat metal workers strike began. Most recently, in the consistently turbulent coal mining industry thousands of miners and their allies have risen in protest against the privatization and possible closure of the Turkish Hard Coal Agency (TTK).

While labor actions have been sporadic and the vast majority of workers remain unorganized, it is in the workplace and in working-class neighborhoods and communities that the formation of popular opposition to the ruling power must begin. Consensus on the left seems to be that dark days lie ahead in Turkey. Yet it is also the case that the crowds hoped for by Erdoğan in the aftermath of the coup have been relatively small. Though political repression may intensify, daily life will go on. It is here that the left must concentrate and build.