“We lost a lot of good, beautiful people”: Demanding Justice in Turkey 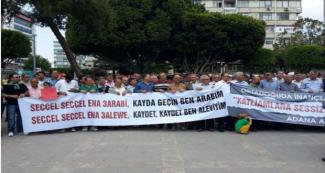 The October 10 Labor, Peace, and Democracy Rally in Turkey’s capital of Ankara was called to demand an end to the violent policies of the Turkish state. Organized by trade union federations and progressive organizations, the demonstration was also supported by the People’s Democracy Party (HDP), a leftwing pro-Kurdish party consistently demonized in recent months by the ruling Justice and Development Party (AKP).

Demonstrators from throughout Turkey began to arrive at the Ankara Main Train Station at around 9 a.m., after which a march to Sıhhiye Square would culminate in a mass rally. Just after 10 a.m. as the march began, two coordinated bomb attacks occurred within seconds of one another. Mass death and carnage beyond description followed. As of this writing at least 128 have died with many hundreds wounded; the death toll will likely rise in the coming days, weeks, and months.

Observers quickly noted the similarities between recent attacks against an HDP rally in the southeastern city of Diyarbakır in June, as well as the ISIL suicide bombing in July of this year in the city of Suruç, in which most of the 33 victims were members of the Federation of Socialist Youth Associations (SGDF). The government has confirmed that the Ankara attack was carried out by suicide bombers, and suggested ISIL as the probable culprit.

Though it is certainly possible ISIL was involved in the bombing, in the aftermath of the mass killing on Saturday the fury of the thousands who rose in protest in Ankara and Istanbul was focused squarely on the AKP government and President Tayyip Erdoğan. Witnesses have emphasized that no security was provided by authorities, and when police arrived 15 minutes after the attacks they fired teargas at those trying to help the wounded or find friends and relatives; ambulances and doctors were not allowed to reach victims. Later, in a truly callous display police again teargassed and prevented mourners from laying red carnations at the site of the attack.

If the state’s targeting of protesters with violent methods in Turkey sounds familiar, that’s because since 2013 the Turkish government has regularly met any public opposition to its rule with brutal repression. The Gezi Park protests in the summer of 2013; widespread labor demonstrations and strikes in 2014 and 2015; protests in the southeast over the government’s permissive policies toward jihadists on border with Syria—all have been met with a violent suppression of dissent that has become disturbingly routine. That thousands chanted “chief and murderer Erdoğan” and “death to fascism” during demonstrations after the Ankara attack is a testament to the level of anger and the courage of citizens opposed to the AKP regime.

Though on Sunday the government declared three days of national mourning, statements from AKP party officials have made government leaders’ lack of sympathy glaringly clear. Erdoğan and Prime Minister Ahmet Davutoğlu emphasized the bombing was a terrorist attack on the Turkish nation, a narrative also followed after the earlier killing of socialist activists in Suruç and an attempt to deflect from the state any responsibility for the attack. Officials were quick to equate the massacre of peaceful demonstrators with Kurdistan Workers’ Party (PKK) attacks against police forces, the message being “terror” in any of its manifestations were simply attempts to a divide the unified nation.

In addition, Davutoğlu and other AKP officials have accused HDP co-chair Selahattin Demirtaş of politicizing the attack for political gain—as if the bombing was not clearly perpetrated against the HDP and the Turkish left. The official story now seems to be that the bombing was an attempt to influence the outcome of a parliamentary election scheduled for November 1, with the abstract nation as the primary victim of the massacre rather than progressive activists advocating for peace, democracy, and social justice.

The notion that provocateurs aim to sabotage the “New Turkey” is not a new idea. The belief that outside forces intend to destabilize the state has an illustrious and useful—if not always inaccurate—career in Turkish political culture, dating to the late Ottoman Empire in the years before the founding of the Turkish nation-state. Erdoğan, whose neo-Ottoman aspirations to the status of sultan are well-known, has consistently ignored demonstrable facts in arguing that opposition to the ruling AKP comes solely from “marginal” elements consisting of external forces—whether Western, Jewish, Kurdish, capitalist, revolutionary socialist, Gulenist, or some bizarre combination of the above—whose sole goal is to keep Turkey from recovering its former imperial greatness. This alleged menace stands in contrast to a vague concept of the “national will,” which has become a keyword for the desire of the AKP to remake Turkey in its own conservative, religious, neoliberal image.

Though such crass attempts to maintain the fiction of a unified Turkey being subject to the machinations of destabilizing outside forces are hardly credible, pro-government media has diligently followed the AKP line, and in the process suggested the HDP (or simply Kurds) actually bombed themselves. In an article published the day after the attack, Yunus Paksoy of the Daily Sabah repeated the suggestion Demirtaş and the HDP are using the massacre to obtain support prior to the November election. The article (not, it should be noted, an editorial) went on to claim that the June 5 Diyarbakır bombing of an HDP rally “created an environment for the victimization of the HDP, which eventually helped it pass the 10 percent national election threshold.” The Suruç suicide attack in July likewise “played into the PKK’s hand as the terrorist organization found an excuse to take up arms again.” Similarly, so the reasoning goes, it is the HDP that will benefit from the Ankara murders—therefore it must be they who are actually behind the attacks.

Fortunately, though a small minority of far-right nationalists and religious fundamentalists may find solace in such fanciful conspiracies, the notion that multiple suicide bombers would blow themselves up for the sake of gaining some extra votes for a leftist political party simply will not be believed.

The practice of blaming the victims, as well as the impunity with which violence against the HDP has been perpetuated, does however explain the outraged response to the attack from opponents of the regime. The media blackout of coverage of the massacre is just one indication that the perpetrators will not be brought to justice by the state, while HDP has claimed government support for radical Islamist proxies in the Middle East (and particularly groups used against Kurds in Rojava) lies at the heart of the Ankara massacre. One survivor of the attack pointed out that security is abundant for AKP demonstrations, while those “who are targeted are the opposition, those who want peace, defenders of human rights and the democratic struggle in Turkey.” Others, Demirtaş included, have responded more forcefully in arguing for state responsibility for the murders.

Erdoğan has recently suggested that the violence of the summer would not have occurred had the AKP achieved a majority in the June 5 election, since this would have made possible constitutional changes that would have increased executive—Erdoğan’s—power. The implicit message is that an AKP majority would restore stability and order, in contrast to the messy system of parliamentary democracy that allows “terrorists” like those in the HDP into the halls of government. Hence it is not surprising many in Turkey believe the AKP regime, if not actually behind attacks like that in Ankara, are encouraging and fomenting violence and chaos in order to regain the parliamentary majority it lost in June.

The rising tide of anger against the state, and the demands for justice, will not be silenced. AKP strategy is failing spectacularly. Organizers of the rally, including the Confederation of Public Sector Trades’ Unions, (KESK), the Confederation of Progressive Trade Unions of Turkey (DISK), the Turkish Medical Association (TTB), and the Union of Chambers of Turkish Engineers and Architects (TMMOB), have declared a general strike on October 12 and 13 “To protest the fascist massacre and to commemorate the death of our friends.” On October 12 numerous strikes, demonstrations, and marches were held throughout the country; workers, students, and whole neighborhoods gathered to mourn the loss of so many committed to peace. The nationwide displays of sorrow and solidarity have been inspiring, and indicate growing antipathy to the regime in regions other than the largely Kurdish southeast.

Nevertheless, more than demonstrations will be needed. The AKP responses to the Ankara mass murders do not indicate a rethinking of government strategy or any new commitment to peace and democracy. Perhaps an HDP statement from October 12 sums up one way to remember the victims and also to change society: “We should unrelentingly show every day and in every place to those who tried to silence the people who gathered in Ankara for peace, that the voice of life and peace will not keep quiet.”