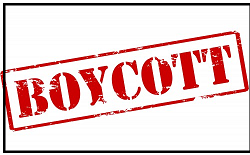 The Intercept has reported some public school teachers are considered to be covered by this Texas law.  Like many workers told they must be independent contractors, Bahia Amawi contracts to work for the Pflugerville Independent School District (a suburb of Austin) as a speech therapist. Last summer Amawi was told she would have to sign a pledge that she would not boycott Israeli products during the length of their contract.  The nine-year worker for Pflugerville refused.  She felt she would be “betraying Palestinian suffering” and betraying free speech rights of Americans.  In response, the school board fired her.

Amawi’s case has become public because she is going to court supported by lawyers from CAIR, the Council on American Islamic Relations.  It seems no unions are yet supporting her.  The site of the Pflugerville Education Association makes no mention of the case, nor do the national sites of the National Education Association or the American Federation of Teachers.

To address this, I’m organizing an open letter to unions and unionists. Realize under this law you can boycott any products from any other country in the world except Israel.  You can boycott American products, the products of any state and even those of Texas.  But under this law, employees can’t boycott products from a nation responsible for discrimination and violence against millions of Palestinians.

The boycott is older than America itself. Think of the Townshend Act of the 1770’s, measures that colonists though were oppressive and which led to boycotts of British goods, like tea.  There was a Jewish led boycott of Germany in the 1930’s that for a while looked like it might topple Hitler.  Back in the 1950s the arrest of Rosa Parks led to the Montgomery Bus Boycott.  And of course, there was the decades long boycott of Apartheid South Africa that help end that system.

Trade unions might be expected to stand with a worker being fired for boycotting a product because the consumer boycott tool has been used by trade unions for a very long time, including the boycott of Driscoll strawberries (pictured) and the recent boycott of Marriott Hotels. The AFL-CIO maintains a boycott list on its website which at the moment includes foods, products and even legal services.

So why haven’t unions rushed to support Amawi?  U.S. labor has long been courted by and blindly supports Israeli governments.  For example, the arch-Zionist Jewish Labor Committee has for years been holding banquets filled with union brass.  In 2009 AFL-CIO head Richard Trumka spoke at one and denounced BDS.  A few years ago when the Connecticut AFL-CIO asked the national to consider BDS, it was sharply slapped down by Trumka.

Once the AFL-CIO itself was considering calling for a boycott of Israel.  In 1985 during a dispute between a U.S. union and the Israeli El Al airlines, the AFL threatened to boycott.  There was a settlement and no boycott.  The Texas law which was used to fire Amawi has a provision [Section 23] that forbids boycotts of any “person or entity doing business in Israel”, in other words any single Israeli business. So if a union had a dispute with El Al and there was a boycott call,  Amawi – or others – could be fired for honoring the call to shun that company.  This would happen even if an Israeli union had called for the boycott!

It’s time for a new effort to organize union support for Palestinian rights.  Sizable numbers of U.S. Jews support BDS of Israel.  At its 2016 Baltimore meeting 600 attendees of a Jewish Voice for Peace gathering unanimously supported BDS.  According to Haaretz both Bernie Sanders and Nancy Pelosi this month publicly opposed any federal law punishing people for supporting BDS of Israel.

Sign on to the open letter to unions and union federations, and contact the Texas AFT and NEA to ask them to support the boycott rights of Bahia Amawi.

*Stanley Heller is a retired teacher.  He has been a member of the American Federation Teachers since 1969 and simplifies economics at www.EconomicUprising.com