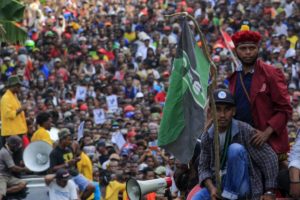 Resistance to the Indonesian government continues in West Papua, and it has a history.

Shortly after declaring independence in 1961, following the departure of the Dutch (who controlled the region), West Papua was invaded by Indonesian forces—Indonesia felt as though the former Dutch colony belonged to them. Since the 1962 invasion, the population of West Papua has been bitterly resisting Indonesia’s brutal occupation. The United Nations has been complicit in helping Indonesia control and terrorize West Papua. For example, the New York Agreement, a 1962 agreement between the Netherlands and Indonesia and sponsored by the UN, gave Indonesia administrative power over West Papua (without the consent of the West Papuan population). Part of the New York Agreement included allowing a referendum to be held for the West Pupuan population to vote on their independence. A referendum was indeed held in 1969; however, it was carried out in the most despotic fashion imaginable. The Indonesian military didn’t just select which West Papuans were going to vote on the independence referendum, they threatened to kill the voters if they voted the wrong way. Following this coerced referendum, the UN General Assembly passed a resolution recognizing West Papua as part of Indonesia (even as a 1969 report from the U.S. embassy pointed out that “UN staff on the ground [in West Papua] believe that given the chance 95 percent of Papuans would support independence”).

Recently in the news (not U.S. news, unsurprisingly), there have been reports of growing tensions as the independence movement continues to thrive in West Papua. This tension between the indigenous West Papuan population and Indonesian security forces, has its consequences (for the indigenous population, that is). A 2018 Amnesty International report found that “Indonesian security forces have unlawfully killed at least 95 people in little more than eight years in the restive eastern provinces of Papua and West Papua” and that 39 of those deaths were “related to peaceful political activities such as demonstrations or raising the Papuan independence flag, the Morning Star”—raising the West Papuan flag is punished with a lengthy prison sentence, usually 15 years, but other times West Papuans are just murdered. Last year Usman Hamid, the executive director of Amnesty International Indonesia, stated that “Papua is one of Indonesia’s black holes for human rights. This is a region where security forces have for years been allowed to kill women, men and children, with no prospects of being held to account.” Silencing separatist voices is the main strategy that the Indonesian government has deployed to try and suppress calls for another referendum on independence in West Papua.

In August, 43 West Papuan students were arrested in Surabaya over allegations that the Indonesian flag was thrown into a sewer on the Indonesian Independence Day weekend. They were later released after police found no evidence that they had thrown the Indonesian flag in the sewer. These arrests triggered protests in West Papua and a local legislative council building was set on fire by protesters in Manokwari (provincial capital of West Papua). Also, in August, 150 West Papuan protesters were arrested in Jayapura, according to Veronica Koman—a well-respected human rights activist and lawyer, for rallying for their cause to be raised at that week’s Pacific Islands Forum Summit. In October, 11,500 people were evacuated from Wamena, a town in the neighboring province of Papua (formerly part of West Papua before Indonesia invaded), after heightened violence between protestors and security forces reached a breaking point. Antara, an Indonesian news agency, reported that 23 people were killed and 77 people sustained injuries in Wamena in a riot on September 23rd.

The U.S. has supported Indonesia through some of its worst atrocities, such as the genocide that it carried out in East Timor in which the Indonesian government killed around a quarter of the East Timorese population. So, it should come to no one’s surprise that the U.S. has been complicit in the Indonesian occupation of West Papua. To give one example, in 1975 the U.S. opposed a proposal, set forth by several African countries (lead by Ghana) in the UN General Assembly, for a second referendum to be held for the West Papuan population to vote on their independence. The Assembly rejected the proposal in large part because the U.S. opposed it (the U.S. has the most important voice in the UN). The U.S., being the most powerful and influential country in the world, has a responsibility to stop supporting the brutal occupation of West Papua just as the U.S. eventually stopped supporting Indonesia’s occupation of East Timor.