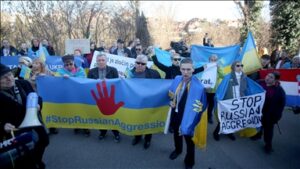 A Croatian demonstration in front of Russian Embassy in Belgrade, Serbia.

With consternation and disbelief, we are witnessing the escalation of the war and violence in Ukraine caused by the Russian invasion and the suspension of negotiations between the leaders of Russia and Ukraine.

As female citizens of Europe and the world, we demand from the Government of the Russian Federation to immediately cease hostilities, knowing that war is a crime against peace and humanity. At the same time, we urge all sides in conflict to continue the negotiations through diplomatic channels and to rely on all available non-violent means, in order to find appropriate solutions and ensure long-term peace and security in Ukraine, including the Donetsk and Luhansk regions.

As peace activists and feminists, we strongly oppose any act of war by any state or international actor. We oppose the culture of violence based on permanent military armament, constructing and producing of enemies, macho-militaristic competition and creation of new military shields in the heart of Europe.

We also oppose the public incitement to war by powerful states based on their geopolitical and financial interests, and warmongering atmosphere that promotes fear and anxiety among the people of Ukraine, but also among the citizens of neighbouring countries as well as citizens of Russia.

As witnesses of the havoc of war and war iconography during the 1990s in our own country, we are well aware of the harmful repercussions of the war and its long-lasting devastating effects on society, civilians and the human community. We know all to well how divided communities in the post-war period suffer from trauma, and feelings of injustice, which makes the healing hard to achieve. For us, human security and the life of every human being is an ethical imperative for every political action, surpassing issues such as state-territorial interests, political independence and military-defence security.

Therefore, we demand for from the Government of the Republic of Croatia to actively support peace efforts in order to prevent further escalation of the conflict.

We express our solidarity with all citizens of Ukraine and express our support for peace initiatives and anti-war movements in Ukraine, Russia and Belarus.

There are scores of signatories.