Russia’s Feminists Are in the Streets Protesting Putin’s War 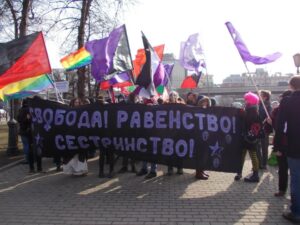 On February 24, at around 5:30 AM Moscow time, Russian president Vladimir Putin announced a “special operation” on the territory of Ukraine in order to “denazify” and “demilitarize” this sovereign state. This operation had long been in preparation. For several months, Russian troops were moving up to the border with Ukraine. At the same time, the leadership of our country denied any possibility of a military attack. Now we see that this was a lie.

Russia has declared war on its neighbor. It did not allow Ukraine the right to self-determination nor any hope of a peaceful life. We declare — and not for the first time — that war has been waged for the last eight years at the initiative of the Russian government. The war in Donbas is a consequence of the illegal annexation of Crimea. We believe that Russia and its president are not and have never been concerned about the fate of people in Luhansk and Donetsk, and the recognition of the republics after eight years was only a pretext for the invasion of Ukraine under the guise of liberation.

As Russian citizens and feminists, we condemn this war. Feminism as a political force cannot be on the side of a war of aggression and military occupation. The feminist movement in Russia struggles for vulnerable groups and the development of a just society with equal opportunities and prospects, in which there can be no place for violence and military conflicts.

War means violence, poverty, forced displacement, broken lives, insecurity, and the lack of a future. It is irreconcilable with the essential values and goals of the feminist movement. War exacerbates gender inequality and sets back gains for human rights by many years. War brings with it not only the violence of bombs and bullets but also sexual violence: as history shows, during war, the risk of being raped increases several times for any woman. For these and many other reasons, Russian feminists and those who share feminist values ​​need to take a strong stand against this war unleashed by the leadership of our country.

The current war, as Putin’s addresses show, is also fought under the banner of the “traditional values” declared by government ideologues — values that Russia allegedly decided to promote throughout the world as a missionary, using violence against those who refuse to accept them or hold other views. Anyone who is capable of critical thinking understands well that these “traditional values” include gender inequality, exploitation of women, and state repression against those whose way of life, self-identification, and actions do not conform with narrow patriarchal norms. The justification of the occupation of a neighboring state by the desire to promote such distorted norms and pursue a demagogic “liberation” is another reason why feminists throughout Russia must oppose this war with all their energy.

Today feminists are one of the few active political forces in Russia. For a long time, Russian authorities did not perceive us as a dangerous political movement, and therefore we were temporarily less affected by state repression than other political groups. Currently more than forty-five different feminist organizations are operating throughout the country, from Kaliningrad to Vladivostok, from Rostov-on-Don to Ulan-Ude and Murmansk. We call on Russian feminist groups and individual feminists to join the Feminist Anti-War Resistance and unite forces to actively oppose the war and the government that started it. We also call on feminists all over the world to join our resistance. We are many, and together we can do a lot: Over the past ten years, the feminist movement has gained enormous media and cultural power. It is time to turn it into political power. We are the opposition to war, patriarchy, authoritarianism, and militarism. We are the future that will prevail.

We call on feminists around the world:

• Join peaceful demonstrations and launch offline and online campaigns against the war in Ukraine and Putin’s dictatorship, organizing your own actions. Feel free to use the symbol of the Feminist Anti-War Resistance movement in your materials and publications, as well as hashtags #FeministAntiWarResistance and #FeministsAgainstWar.

• Distribute the information about the war in Ukraine and Putin’s aggression. We need the whole world to support Ukraine at this moment and to refuse to help Putin’s regime in any way.

• Share this manifesto with others. It’s necessary to show that feminists are against this war — and any type of war. It’s also essential to demonstrate that there are still Russian activists who are ready to unite in opposition to Putin’s regime. We are all in danger of persecution by the state now and need your support.

Feminist Anti-War Resistance has a Telegram channel with additional information (in Russian). Members of the initiative are anonymous for security reasons. Its representative in London is Ella Rossman.