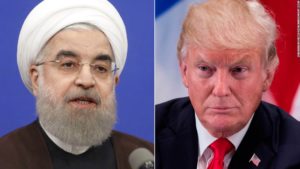 Donald Trump’s withdrawal of the United States from the Iran nuclear agreement has set a path toward another Middle East war. It is not necessarily a war that will erupt right away or in the short term, and it may be averted if the United States is politically isolated and there’s a mass revival of an international antiwar movement. That’s what every sane person, and certainly every socialist and peace activist, should hope and work for.

Nonetheless, the course now is set toward intensified regional tensions, potential nuclear proliferation, growing conflicts between Israel and Iranian forces in Syria, and ultimately a U.S. military confrontation with Iran with incalculable consequences for the world. Beyond condemning this reckless adventurism, the question to ask is: Why?

This is not a war that the U.S. population wants — the big twit campaigned, after all, on the pretense that he opposed the disastrous invasion of Iraq. It is not a war that most of the U.S. capitalist class seems to want, and certainly not what the United States’ imperialist allies in Europe want.

In immediate terms, Trump’s blowing up the deal is a gift to Vladimir Putin as the price of oil increases. It also benefits Iran’s hard-right enemies of president Rouhani — reactionaries, fundamentalists and Revolutionary Guards officials who control much of Iran’s sclerotic economy, and happily profit from the lucrative activities of sanctions-busting. Iran’s people pay the price in a falling currency, consumer shortages and higher prices, increasingly dangerous aircraft deprived of spare parts, and other hardships along with harsh political repression.

Trump’s action sets up a tussle with the European Union and its member states, over whether U.S. financial muscle can coerce European companies to withdraw from economic deals with Iran — on top of the conflict over his protectionist tariffs and pending European counter-measures. If this U.S. coercion succeeds, as is possible given the huge extent of U.S. power over international banking and the EU’s weaknesses, Iran’s return to uranium enrichment becomes all the more likely.

What then lies behind Trump’s effort to unilaterally cancel the JCPOA (Joint Comprehensive Plan of Action, the formal title of the agreement with Iran negotiated in 2015 by the United States, Britain, France, Russia, China and Germany)? Partly, no doubt, it’s to satisfy the twit’s egotistical drive to cancel anything that Barack Obama worked to achieve — health care, financial regulation, consumer protection, action on climate change, protection for immigrant youth, and everything else. And it appeals to part of his political base at a time when he’s swamped in corruption, sex and collusion scandals.

But Trump’s destructive personal agenda is not a sufficient explanation. Secondly, he has the enthusiastic approval of the Israeli and Saudi Arabian regimes. Benjamin Netanyahu has been agitating for years for a U.S. attack on Iran, which Israel can’t do on its own. And the Saudi kingdom’s agenda is driven by hostility to Iran’s growing regional power — an agenda that includes the Saudi-U.S. war in Yemen that is destroying the population of that country by starvation, epidemic and indiscriminate bombing. And it undoubtedly encourages Israel’s wanton shooting of Palestinian civilians at the Gaza border fence, and the escalating Israeli bombing of Syria.

Third and probably most important, the Trump regime is now stuffed with the neoconservative militarists who still think that the Iraq invasion was a good idea, and want to double down on it — arguing that extreme sanctions will weaken the Iranian economy to the point of collapse and set the stage for “regime change.” It’s an ideological mission. For these types, gambling with the lives of literally hundreds of millions of people is playing with house money. The fact that the U.S. capitalist class lets them do so testifies to its cynicism, the absence of a serious Democratic Party opposition to military adventurism, and the general dysfunction of bourgeois politics in this country.

What about the argument that the JCPOA was “flawed” to begin with? What about Iran’s role in Syria and “promoting terrorism”? What about those “sunset clauses” that Trump complains about in the agreement? We have to go back to what the agreement was, what it wasn’t, and what it couldn’t be.

To begin with a basic truth: In the long run, nuclear weapons will be globally eliminated — as over 120 member states of the United Nations have demanded — or they will proliferate, whether in the Middle East or the Korean peninsula or anywhere else. Iran’s initial nuclear development began in the 1970s under the Shah, with U.S. approval.

The Iranian rulers halted that program following the 1979 revolution, but resumed it in the 1980s — directed not against the United States or Israel, but against Saddam Hussein’s Iraq, which invaded Iran in 1981 to begin a hideous eight-year war where both sides worked to develop chemical, biological and nuclear “weapons of mass destruction.” The Reagan administration encouraged Iraq to launch that war and worked to prolong it (while also secretly selling weapons to Iran to finance the U.S. illegal contra war against Nicaragua’s revolution.)

Following the U.S. invasion of Iraq in 2003, which toppled Saddam’s rule and made Iran the strongest state in the area, the Iranian regime offered a comprehensive regional agreement with the United States. Washington dismissed the idea — as its grand plan was to move on from its great Iraq victory to overthrowing the Islamic Republic. We know how that turned out.

Against that backdrop and Iran’s subsequent advances in uranium enrichment, the 2015 JCPOA had one objective — to block one flashpoint of proliferation, Iran’s potential path to nuclear weapons capability and by extension the nuclearization of its regional rivals. In exchange, crippling economic sanctions on Iran were lifted. The United States never fully even honored that commitment, and now Trump claims that unilateral “maximum economic sanctions” will squeeze more concessions from Iran, including a permanent cessation of nuclear enrichment. Whether or not the big bully actually believes that, the logic of that position leads toward forced “regime change,” or war — or both.

The nuclear deal did not change the hideous character of the Iranian regime, or any other — not Saudi Arabia, not Egypt, not the Gulf kingdoms. Nor did it curb the malicious mischief perpetrated in Syria by Iran or any other state — not Saudi Arabia, not Russia or Turkey, not Israel and certainly not the United States. Any fiction that the deal would change the nature of any regime, or prevent any states and ruling elites from acting in their own state interests (real or perceived), was delusional.

Even more delusional and dangerous is the idea that U.S. withdrawal from this agreement will bring stability or progress to the Middle East, fresh negotiations for “a better deal,” or any progressive reform or regime change in Iran. Regime change in Iran can only be accomplished by its own people, not from outside — any more than political change in the United States could come about through bombing or invasion from the outside. As for ending the threat of war and ultimately the nuclear destruction of human civilization, that requires a global “true revolution of values” — Martin Luther King’s memorable prophetic phrase — and an international movement to end imperialism for good.