Brazil: the snare of short-cuts 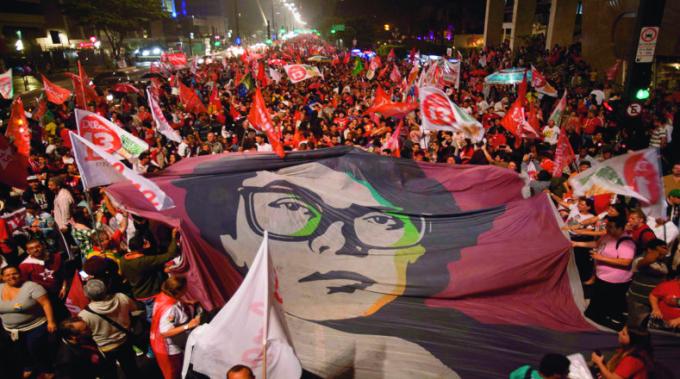 Brazilian socialist Andressa Alegre spoke to Solidarity about the experience with the governments led by the Brazilian Workers’ Party (PT) between 2003 and 2016.

The PT, was founded during the military dictatorship, in the conflict against the dictatorship of 1964-85.

It was a very radical party. In 1988 it said that the way to end Brazil’s external debt was to nationalise the banks and Brazil’s mineral wealth.

It promised to do a big land reform.

Between the time the party started in the 1980s and when it first formed a government in 2003, it lost a lot of its basic politics. The ideology of the party became more and more washed-out, and when it was elected, it was on the basis of a slogan like “Hope will defeat fear”.

Even then in 2003 people expected land reform: the movement of landless workers was a really big thing in Brazil. They expected an end to corruption, which was very much a legacy of the military dictatorship, and taxation of the rich to build a welfare state.

During the PT government about 20 million people came out of extreme poverty. Many workers previously “informal” gained formal employment status.

Lula expanded massively the Bolsa Familia, a benefits system which gives a certain amount of money to families depending on how much money they have, the only condition being that their children attend school. That was very popular.

Lula was more popular at the end of his administration, in 2011, than when he got in, which almost never happens.

Resentments built up on the right. You hear people saying, “you can’t find the help any more” (about domestic servants).

Because of the kind of government that we have, even though the PT had the biggest number of seats in the chamber of deputies, Lula had to make various forms of coalitions with different parties, including the PMDB, which was a kind of official opposition party under the dictatorship.

The government was able to do all this because of favourable economic conditions and making favourable deals with big landowners.

It had money to spend on benefit systems; but also made deals with big landowners. The landless workers’ movement MST still protects the PT, but says that the PT government was not good for land reforms.

Inside the PT, the internal life is not great. An internal web-forum was set up to discuss the PT’s policy, and then there were fewer meetings. Activists are no longer responsible for political campaigning, which has been outsourced to private companies. The PT now only exists in industrial life, or industrial politics in the union movement. It is much less active on the streets.

There was still opposition from some groups like the PSOL, which was a split, and the PSTU. Other parts of the left like the Communist Party had electoral coalitions with the PT and weren’t doing much at the grassroots.

I don’t know if the PT label themselves as “anti-Stalinists” but they see themselves as a more liberal-socialist alternative to the Communist Party.

The economic crisis from 2014, made it harder for the government to conciliate the ruling class with reforms. Yet the left is really disorganised.

In 2013 we had really big demonstrations in Brazil, which were politically brainless. They called for better education and better healthcare, but they lacked the organisation to make a programme, or to criticise the government, or hold them to account instead of trying to throw out. Those two things together made Dilma Rousseff’s popularity fall massively.

The crisis made it much more difficult for the government to conciliate the needs of the ruling class and the working class.

The massive unrest was not channelled by the left. The left was not organised to do that.

The demonstrations became more and more right wing and were led, especially in big cities, by the MBL movement, which is like the “Free Brazil” movement, a “neither-right-nor-left”, “new-politics” type of alliance. The decline of the PT also left a vacuum in communities which was often filled by communalism and/or by Evangelical Christians, who have grown a lot and become a really big political power.

The current leading candidate for the next Presidential election is a right-wing evangelical Christian.

Secondly, to maintain the internal life and democracy of the party. Do that to maintain your principles and shape policy, and also to hold leaders to account once they are in government.

Once those leaders are in government and all the other forces, mostly bourgeois forces, are pushing them to the right, we need a big movement that we can rely on.

Originally published at the Alliance for Workers’ Liberty website.