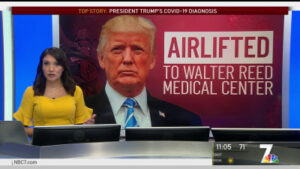 The American election and the country’s future are once again a question. Early on the morning of October 2, President Donald Trump tweeted that he and wife Melania Trump had both contracted the coronavirus. Since then it was revealed that others, including the director of the presidential office and the head of Trump’s campaign, had also tested positive for COVID, as well as others in his inner circle. Three Republican Senators have tested positive too.

The White House and Capitol Hill cases appeared to be the result of recent Republican political events, all of them ignoring public health practices such as social distance and masking and some held indoors. Trump and others who tested positive will have to be quarantined for fourteen days, slowing down the president’s campaign.

Trump being a male, 74-years old, and obese is in a high-risk category with a much greater chance of severe illness or death. His doctors had him flown to Walter Reed Military Hospital where he was given a still experimental cocktail of monoclonal antibodies, as well as Rendesevir, which has become a standard treatment for severe cases of COVID.

Trump has over the last several months called the coronavirus a hoax, downplayed its severity, saying it was no worse than a cold or the flu; he has constantly contradicted public health officials’ warnings, suggested dangerous treatments and not only wouldn’t he wear a mask but he discouraged his family, friends, and coworkers, and his millions of followers from wearing them. At the first presidential debate a couple of days before, he ridiculed his Democratic opponent Joseph Biden for wearing a mask. To many the president’s illness appeared to be poetic justice or divine retribution, but it is simply science: with his refusal to wear a mask and to social distance he brought the illness upon himself.

Early reactions to these events suggest that they will contribute to the continued downward spiral of Trump’s campaign, which has been losing support because of his poor handling of the pandemic. But it is too early to say for sure what the effect will be.

While Trump has been the focus of news reports, about 800 Americans are dying of the disease each day, and 210,000 have died altogether so far because of the president’s maladministration of the government response to the disease. Trump’s failure to provide leadership leaves the United States with inadequate testing, ineffective contact tracing, and no authority to insure quarantine or isolation for those affected. Some 7.4 million Americans have been diagnosed with the disease, but few if any will receive the kind of care that Trump is receiving from the best physicians at one of the country’s leading hospitals.

The American presidential election, which will take place on November 3, will be the most important since the 1930s. It may well determine whether American democracy—such as it is—continues to exist or is replaced by an authoritarian government, perhaps even by a dictator. At the time Trump fell ill, most polls showed Biden leading by roughly 10 points over Trump and as of October 3 the Financial Times predicted Biden winning the Electoral College by 279 to 125. Winning the votes may not be enough.

President Donald Trump, authoritarian and racist, has polarized the country, encouraging the growth militant white nationalist movements that include armed quasi-fascist organizations. Trump has said that he will not necessarily accept the results of the election; he will try to tie up the election in the courts; and it is feared that no matter who wins he will claim victory and use his authority to perpetuate himself in office. All the major news media and the social media have discussed openly the possibility of a coup d’état in the United States.

How Trump’s illness will change the election remains unclear. Whatever happens, we on the left will all be on guard, prepared to resist.

Posted October 5, 2020 Electoral Politics, Uncategorized, United States by Dan La Botz
About Author
Dan La Botz is an editor of New Politics and a writer. His latest book is Trotsky in Tijuana (trotskyintijuana.com).