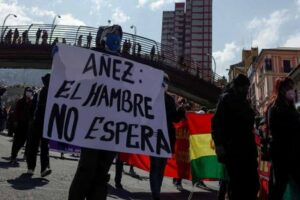 Protester in La Paz holds up a sign that reads: “Anez: hunger does not wait”. Photo: Radio Kawsachun/Facebook

Just weeks out from the October 18 elections, Bolivia’s coup government is again in crisis following the departure of three key ministers over an unconstitutional attempt to privatise an electricity company.

It comes as polls show Movement Towards Socialism (MAS) presidential candidate Luis Arce potentially winning in the first round, less than a year after his party was thrown out of office by a right-wing coup.

Despite pledging to only occupy the post for 90 days until elections could decide a new president, Áñez’s illegitimate regime has instead attempted to use its power to roll back anti-neoliberal measures implemented by the Morales government and unite the various anti-MAS factions.

Her regime, however, has been marked by its catastrophic handling of the COVID-19 pandemic, which has, so far, left almost 8000 dead and left Bolivia with the third-highest COVID-19 death rate in the world.

This failure has been compounded by her government’s poor economic management — with more than 1 million Bolivians dropping below the poverty line — and more than 20 high-profile cases of alleged corruption within her cabinet — which has had 17 changes of ministers in 10 months.

The most notorious corruption case was the use of a loan from the Inter-American Development Bank (IADB) to purchase 179 ventilators in May, at more than twice their regular price, which led to the arrest of the health minister and other top health officials for corruption.

Another similar scandal involved the purchase of overpriced tear gas for the police by the defence minister.

The latest cabinet crisis was triggered by fallout over a push to reprivatise the Cochabamba regional electricity company, ELFEC, which was nationalised by the Morales government in 2010.

The disagreement led to the sacking of economics minister Oscar Ortíz and the resignation of the labour and productive development ministers on September 28.

A week earlier, state general prosecutor José María Cabrera was also dismissed for questioning the constitutionality of the privatisation decree. Cabrera was overseeing the investigation in the questionable purchase of tear gas by the defence minister.

Speaking to the media, Ortíz said he refused to sign the privatisation decree as it went “against the legal system” and did not have “sufficient legal support.

“I do not think that the government, in its last weeks, should allocate new contracts or important tenders, which should be left for the next administration.”

Ortíz also denounced the government for attempting to push through with several other purchases and contracts in its final weeks in office, including more than $7 million on new vehicles.

The Plurinational Legislative Assembly has announced it will open an investigation into this and other questionable purchases, as well as several irregularities and alleged acts of corruption that have occurred within various state-owned companies.

In Ortíz’s place, Áñez promoted planning minister Branko Marinkovic, who was quick to announce he would travel to the United States to solicit new loans from, among others, the IABD.

With Arce leading the polls — despite the wave of government and right-wing paramilitary repression against the MAS, which has only escalated during the election campaign — various government factions are seeking ways to protect themselves and their ill-gotten gains.

A day after right-wing think tank Jubilee Foundation released a poll showing Arce winning in the first round, Áñez announced she was stepping down as a presidential candidate on September 17.

While presented as a move to help unify the fragmented anti-MAS bloc, currently divided behind several opposition candidates, it is more likely that her withdrawal was motivated by a desire to strike a deal for immunity under any potentially victorious anti-MAS candidate.

Rather than endorse any particular candidate, Áñez — who will still appear on the ballot due to the late timing of her withdrawal — instead called on voters to unite behind the candidate with the best chance of defeating Arce.

Meanwhile, the state attorney general told the Assembly that the military is refusing to cooperate with the investigation into the massacres at Senkata, Sacaba and Yapacaní last November, which left at least 32 anti-coup protesters dead.

Given all this, many are questioning whether the elections will be free and fair — or if they will happen at all. The elections have already been postponed twice and the October 18 deadline was only established following mass nationwide protests in August.

With the future of Bolivia’s democracy and economy at stake, much more will no doubt occur in the coming weeks.