Too old to work, too young to die: The struggle for pensions is the battle for retirement

Illinois, which has a Democratic governor and a state legislature controlled by the Democratic Party, has just gutted its pension system for public employees. 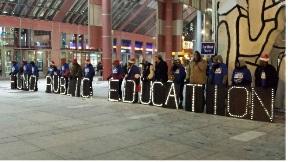 The vote of 62-53 was possible because many Democrats supported the bill, which they cast as the only financially responsible solution to the state’s very real budget shortfall. Chicago will be the next battleground for this struggle, and corporate media are preparing us for gutting the pensions of Chicago’s teachers using this quote from Mayor Emanuel: “The pension crisis is not truly solved until relief is brought to Chicago and all of the other local governments across our state that are standing on the brink of a fiscal cliff because of our pension liabilities.”  Some local coverage seemed more sympathetic to public employees, describing what the cuts to their pension will mean in human terms, but in all cases the media pushed a narrative that this is needed for financial responsibility.

The union coalition fighting the legislation cast the legislation as “pension theft” – which it is. (I’m assuming that readers know the background information that explains why the pension legislation is unjust.)  In adopting this strategy, the unions put themselves in a weak position. While they may not have been able to stop the legislation, a more politically astute campaign would have better positioned Chicago teachers in their fight. Though twitter was dominated for a bit with the hashtag “#pensiontheft” that effort wasn’t enough – and won’t be.  Even great PR can’t substitute for accurate political analysis and mobilization based on it.

We are losing on public employee pensions because powerful elites that control our economy, government, and media have won two victories. One is material: The overwhelming majority of people who work in the private sector cannot rely on adequate pensions from their employers. Another is ideological: The belief that people who profit from our labor have an obligation to provide us with a comfortable retirement has been lost.  People who have no pensions themselves are not going to fight for pensions of public employees. Teachers unions, who are now the largest and strongest unions in the public sector, have to face this reality.

Public employee unions’ defeats on pensions emerge from our having accepted pension increases and school funding based on unjust taxation.  One reason UK teachers have been able to mount a more vigorous campaign for their pensions than we have in the US (though they too have been hampered by neoliberalism’s victories) is that UK schools are funded by the national government. Pension fights are national and therefore mobilization is too. Moreover, the NUT has done much more to mobilize its members, in local campaigns against charter schools, in demonstrations, protests, and strikes about the impact of budget cuts and deprofessionalizing of teaching.  In contrast, the PR campaign the NEA and AFT have organized to “Reclaim the Promise” of public education has been mostly that – PR.  There was a lot of media attention but most of the events that were organized were of the nature of collecting books to give to needy students. While this is a nice gesture, it doesn’t educate teachers or the public about the assault on public education the Right is waging.

Federal legislation that controls who teaches and what, through standardized testing and legislation making Teach for America immensely power, has given de facto control of our schools to Washington (that is, to the powerful elites who control both political parties). But school funding is still primarily based on local property taxes and oversight is still, nominally, in the local school district -except for poor communities of color, which have had their democratic right to control their schools usurped in state takeovers.

Teachers unions should be calling for a new system of progressive taxation for education that parallels the federal government’s new control. We should have BIG money from the federal government, now in many districts only 3% of the school district’s per pupil expenditures.  In urban districts, the federal share is higher but still very low.  The federal government should also assume financial responsibility for teachers’ pensions.  And how will this be funded? Through a fair system of taxation, making the bosses pay for the services that have made their profits possible.

Obviously the Democrats are not going to fight on this issue.  In Illinois what the teachers unions should do is to form an independent labor-education party and run independent candidates against every Democrat who voted for this pension law.   The message we want to bring is that taxation is unjust and pensions for people who work for the public good should be funded by the wealthy, who have escaped their political, economic and moral obligation to pay for what they have received.

Our defense of pensions is really a battle to save the right to retire in dignity.  All workers deserve that.  First private pensions were gutted.  Now public employee pensions are being destroyed. These victories are strengthening the hand of the 1% to loot social security, their greatest dream, one the Democrats have already shown they’ll grant unless we stop them.  (Barry Finger’s and Betty Mandell’s blogs here on New Politics explain why and how we need to defend social security. )

"Too Old to Work Too Young to Die," a labor song written by Joe Glazer, was inspired by a speech by Walter Reuther and the Chrysler pension strike in 1950.  The labor movement, even its more progressive unions, decided after World War 2 to fight for pensions by sector, as opposed to demanding a robust national pension, funded by progressive taxation, that would give all workers a comfortable retirement.  We are now paying the price for their unwillingness to fight the bigger struggle.  We need to learn from labor struggles that built the social safety net being destroyed. While there is much we can borrow, we have to learn from that movement’s mistakes. In the final chapter of his history of the Canadian Auto Workers, Sam Gindin observes that “movement unionism includes the shape of bargaining demands, the scope of union activities, the approach to issues of change, and above all, that sense of commitment to a larger movement that might suffer defeats, but can't be destroyed.”

Labor unions and working people have suffered a defeat in Illinois with the new pension law. But this loss occurs within the context of a “larger movement” Gindin refers to, which has been reinvigorated by the Chicago Teachers Union and reformers in CORE.  It’s up to them now to fight for Chicago’s teachers and public education by ratcheting up the political costs for Democrats who betrayed ideals of social justice. The fight for pensions is for dignity in retirement, for all working people. Joe Glazer’s song is ready to be used again, tweaked to take account of the fact that most teachers are women who provide for themselves as well as their families.

You work in the factory all of your life,
Try to provide for your kids and your wife.
When you get too old to produce any more,
They hand you your hat and show you the door.

Hear it sung by The Vigilantes.

I invite reader responses, either to New Politics as a blog I can post or as comments to me at drweinerlo@gmail.com.  Is there a subject you want me to tackle? Let me know. And you can follow my thoughts on teaching, schools, and education on twitter , Facebook, as well as my blog every Wednesday here at New Politics.

Posted December 11, 2013 Electoral Politics, Labor, Teacher unions by newpolitics
About Author
LOIS WEINER writes widely about education, labor, and politics, specializing in teacher unionism. Her new book looks at lessons for the Left  in capitalism's alteration of work and education, and how teachers and their unions can resist with support to and of movements for social justice.