The Whitney Museum recently took down our murals. True enough, they never asked us to paint on the plywood barrier built to protect the building during the recent protests. But for a few nights we painted. Mine was a mural about police brutality toward protestors. Now the Whitney has taken them all down.

There is a certain irony here since the current exhibit is about the Mexican muralists and their influence on American painters. Diego Rivera is the most well known of those and there is a dramatic story of how John D. Rockefeller, Jr. took down Rivera’s mural “Man at the Crossroads.”

Now, I’m not comparing myself to Diego Rivera, except that both of us had murals removed. Rockefeller didn’t like Rivera’s politics. The Whitney just didn’t care about mine.

I was bicycling around one night when I saw people painting on the Whitney’s barriers and I joined them. At first I drew. The next day I brought house paint.

I’ve always loved politically motivated murals like the Mexican muralists. I hadn’t felt the political urgency to paint one until the Trump era. Police brutality existed before Trump, of course, but it never felt like part of my life before. That’s privilege. 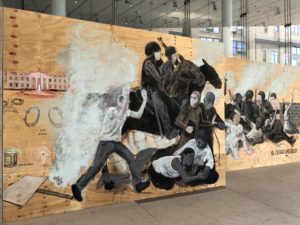 I was thinking about the clearing out of Lafayette square, the tear gas and violence used on peaceful protesters. And I thought about my own recent experience at a demonstration here in New York at Columbus Circle. I was painting from those memories and feelings.

I wanted to paint something hopeful and horrifying in black and white but with some nuance. In the painting there’s one cop trying to hold back the others, but it doesn’t matter.

The security guards came by and took a look and liked what I was doing. Then the head of security came by and said, “It looks good. Just don’t make a mess.”

As we were painting, people would come up and talk. People in the neighborhood would return often to see our progress. Many were members of the Whitney who couldn’t see the art inside. They said they were glad to see art outside of the museum and to talk to the artists. It was an interactive exhibit—and free! I liked talking to people while painting.

I listened to James Baldwin’s “The Fire Next Time” while staying up all night to finish it.

An engineer who worked at the museum came by and said to me, “This is illegal.” I told him I’d talked to David, the head of security. “Oh, okay,” he said. And he added, “I just don’t like the FTP,” referring to some graffiti tags around the building. “I don’t like those either,” I said.

The police arrested me once during a protest. That was during Occupy Wall Street’s student debt day. I went to Cooper Square, climbed Cooper’s statue and made a speech and wouldn’t get down until the cops came with a cherry picker and took me down. I had just graduated from the Cooper Union art program and that year they began to charge tuition for the first time in 155 years. I thought that was wrong, so I protested, was arrested and spent a night in jail, was charged with four misdemeanors and did community service.

I also took the police exam last year and I’m currently on the list to be called up. I could become a cop. I’m the son of a New York firefighter and I used to think that maybe if I joined the police I could be a force for good, say, if I found myself working with a psychopath like the guy that murdered George Floyd. But in the last month I’ve realized maybe that’s not possible. The way the system is now, the bad police can’t be restrained by the good ones. So now, I don’t think I could become a cop, even if I were called.

I’m an artist. One of those artists influenced by Diego Rivera and the Mexican muralists whose paintings are in the current Whitney show. I painted my mural and if it didn’t get in the Whitney it got on the Whitney, appreciated by those who walked by, interested to see what I thought about the protests and the police. Meanwhile, the Whitney exhibit is still closed, locked up, and no one can see those muralists, while those of us who are painting murals have had ours taken down. Our murals trashed; so were Rivera’s. We’re in good company.