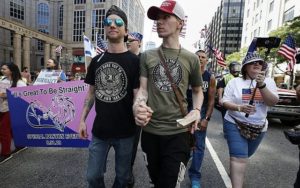 Protesting the “alt-right” in Boston, MA has become a back-to-school routine for the New England left, but this year’s “straight pride” event marked a qualitative and quantitative shift in the dynamics and forces present in The City on a Hill. Much like Seattle, WA and Berkeley, CA, over the past several years, the right has targeted Boston to stage its provocative rallies and base building efforts under the guise of defending free (conservative) speech. However, compared to 2017, which brought over 40,000 counter-protesters to halt the alt-right’s display of nationalism and bigotry, and 2018, which brought several thousand demonstrators, to drown out its anti-immigrant propaganda, this weekend’s event drew a significantly smaller and less organized crowd—a set-back for the left. If the left is to defeat the far-right and the creeping influence of fascist ideology, an honest assessment of this is necessary.

The straight pride event, hosted by Super Happy Fun America (SHFA), was composed of many of the same groups and figures from years past including the Proud Boys and individuals with ties to Resist Marxism, but unlike 2017 and 2018, the alt-right was able to successfully march and hold a rally for several hours on August 31.  The alt-right crowd was modestly larger but significantly more racially diverse and sophisticated in its messaging than years past. The anti-LGBTQ focus cut across racial divisions and featured Latinx, African American, and even LGBTQ speakers.

Contrary to 2017 and 2018, the right’s 2019’s event sought to legitimize its ideological position by casting queer rights as an identity politick that the political establishment had catered to at the expense of others. At the straight pride event, Marvina Case, of Moms for America and Texans United for America, argued for a return to traditional values. Identifying herself as a survivor of sexual assault, Case, a Black woman, urged listeners to embrace traditional gender roles and reject identity politics. Railing against accusations of “toxic masculinity” Case argued that “effeminate weak men are destroying the [country’s] balance” and a lack of strong masculine role models has led to the rise of mass shooters. Another speaker criticized the push to include LGBTQ curriculum in schools. Referencing the educational inequities that plague the American public-school system, she emphasized the need for curricular focus on reading and math, not the inclusion of LGBTQ history. These examples demonstrate the growing sophistication of the right’s messaging and its ability to temporarily align itself with constituencies it generally opposes. The right has no interest in the well-being of marginalized communities nor in the adequate funding of public services such as education. Still, its messaging acknowledges contemporary social ills while insisting the antidote is a rejection of identity politics and a return to rigid gender-based hierarchies.

As reported in the Guardian and elsewhere, the counter-protesters outnumbered the right substantially; nevertheless, this was a significantly smaller ratio compared to years prior. At its height, the counter-protest swelled to about a thousand, while the straight pride event counted two to three hundred. Both crowds thinned out once the march reached its rally point. A smaller organized left presence meant a weaker political messaging among counter-protesters. During the march, several small but energetic organized contingents countered the right’s pro-Trump, anti-immigrant and anti-LGBTQ messages with political chants, but by the time the counter-protesters reached the right’s rally point, the organized contingents had loosened or dissipated completely. This left an ideological vacuum that was filled with underdeveloped and sometimes sophomoric politics (i.e. chanting “find the clit” and “Boston hates you”) and created an opening for provocateurs inside the counter-protest crowd.

Related, the smaller size of the counter-protests and the weakness in politics allowed for the police to take a significantly more violent position than years past. Antifa identified activists bravely attempted to occupy the streets for brief periods, but were grossly outnumbered by an aggressive police presence. Buses filled with riot-police, pepper-ball guns, and military-grade equipment and tactical gear made clear that the State held the real power. In the end, thirty-six counter-protesters were arrested, but many more were clubbed, and pepper sprayed as the police sought to clear the streets near the conclusion of the straight pride event.

The legitimization of the far-right and the creeping influence of fascist ideology is a genuine threat that the left must contend with. The alt-right (including the far-right elements within it) uses these street battles as recruitment tools and with the already pitched tension of the 2020 election season as well as the looming economic downturn, it is essential that the growth of these forces be taken seriously. The right’s ability to re-brand itself and mobilize greater numbers indicates that these forces cannot simply be ignored. In a statement that noted the white supremacist underpinnings of the SHFA event, Boston Pride discouraged individuals from attending the counter-protest, arguing that straight pride is “a trolling event, designed to get a rise out of vulnerable communities.” This is the exact opposite position the left should take. As one activist and Democratic Socialists of America member, Na K Jagan, put it, writing on Facebook, “Yesterday in Boston the fascist alt-right was able to successfully hold its straight pride march and rally and the violence was entirely turned over to the police state. There was no street battle between the alt-right and Antifa. The cops did the fighting for them. Intentionally breaking their own lines to smash heads and pepper spray people, charging medics trying to help people, a procession of motorcycles thundering through running into protesters…. The fascist movement today is re-branding itself to have a mainstream appeal while the traditional violence to attack the left, migrants, and workers are carried out by the state with support from the middle class.”

While we cannot discount the spontaneity that led to the enormous counter-protest in 2017 following the far-right event in Charlottesville and the murder of Heather Heyer, the left must more effectively mobilize for confrontations with the far right. This means creating broader regional and national coalitions that can come together across political disagreements to oppose the right. It also means prioritizing movement work over electoral work and finding synergy between the two. At their recent convention, the 56,000-member Democratic Socialists of America voted to establish an anti-fascist working group; however, there appeared to be very little regional coordination to build for this important event. An organization of this size has the resources to initiate the kinds of broad coalitions necessary to build a larger and more politically coherent opposition to the right. A counter-protest composed of liberals and leftists with clear delineated contingents could have prevented the right’s event (as it has in years past) and been a boon to DSA’s efforts to canvas for Bernie Sander’s 2020 election bid.

The right has a response to the on-going social crisis: scapegoating immigrants, LGBT people, women, and workers. Trump’s threats to brand Antifa as a terrorist organization while legitimizing the voices of the right show the state’s willingness to tolerate far-right politics in an era that seeks to expand the profit-making capabilities of the ruling class through the increased precarity and exploitation of segments working people. The left needs its own response, which may include electoral expression but also requires deep organizing and broad coalition-building to defeat the right and advance a more just vision for society.