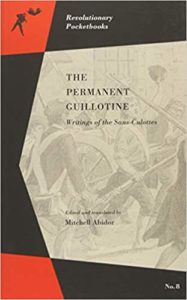 The French Revolution (1789-1795) is generally recorded in world history as having been led by Maximillien Robespierre and the Jacobins, whom are assumed to be in most standard textbooks, the most radical political group, those whom instituted the reign of terror. The reign of terror if we are not careful mystifies that after the first republic was established there were class struggles in the French Revolution whose meaning must be reconsidered.

While Robespierre and the Jacobins can be seen as proto-socialists on some level, a forerunner of Lenin and the Bolsheviks, most critical historical studies of the French Revolution see them as forces from above, primarily professionals and parliamentarians. To view the Jacobins as radical democrats is a stretch. They were enemies of the old politics of aristocratic rule but advocates of a new authoritarian regime. In fact, there were political actors from below society that more profoundly shaped this social revolution, and expressed a more direct democracy.

The sans-culottes, those who did not wear silk knee breeches but pantaloons or trousers, were the commoners who stormed the Bastille, freed those imprisoned, killed its superintendent, and carried off his head on a pike. It was this social class, that self-mobilized in often insurgent fashion in their sections (or the neighborhoods of Paris districts), that questioned the economic system and the legitimacy of religion.

But the sans-culottes, whose names are often obscure, could also be contradictory and inconsistent. While expressing in embryo the communist, anarchist, and socialist conceptions that would emerge later in history, they also could express a national-patriotism and an adherence to a progressive ruling elite, which the Jacobins embodied for a time. The sans-culottes fell short in their perspective of redistributing property though they did believe there should be price controls on the necessities of life such as food. The sans-culottes were really the mass social force that pushed from behind Robespierre’s Jacobins and exposed ultimately their basic authoritarian character.

Mitchell Abidor’s The Permanent Guillotine does a great service to the scholar of radical history and political thought who has little facility in French by translating into English a selection of the writings of the sans-culottes and their spokespeople, particularly Jacques Roux (1752-1794), Anacharsis Cloots (1755-1794), and Jacques Hebert (1757-1794). The book is organized with an introductory essay by Abidor that surveys deftly the historiography of the French Revolution, particularly those scholars who have recognized popular forces from below society. These include insightful readings of the perspectives of French Revolution historians Albert Soboul, Daniel Guerin, and Peter Kropotkin.

Abidor’s selection and interpretation may suggest a slight shift in the recording of the sans-culottes heritage. It leads with a collection of mostly unsigned pamphlets, which appear largely in an open letter or dialogic style. It is striking how the sans-culotte critiques, animated by an Enlightenment conception of reason, don’t totally leave religion behind. Neither does their tendency toward a direct democracy discard for all time a republic or social contract with checks and balances that are in reality among a hierarchy.

It seems that among the miscellany, Jacques-Francois Varlet, associated with Roux, as co-leader of the Enrages, middle class spokesmen for these commoners, and who was arrested with Hebert in May 1793, only to be released after three days and prepare an insurrection, is absent from this collection – but it is difficult to tell because some of this political literature was unsigned.

Cloots, a Prussian nobleman who was a notable radical internationalist present in France during the revolution, and who was repressed by Robespierre’s Jacobins for his partnership with the radical activities of Hebert, and executed with him at the guillotine, was clearly sympathetic to the popular forces of the social revolution. But as far as I am aware, Cloots has never been previously linked in the past to the sans-culottes.

Hebert is a compelling figure. Our awareness of his significance in the French Revolution seems to have grown as Jean Varlet’s has declined. Hebert is a type of bridge figure between the Cordeliers Club, Marat’s agitation against the Girondins, the killing of Jean-Paul Marat by Charlotte Corday, a Girdonin sympathizer, and the Enrages. Hebert seems to have superseded Varlet.

As a journalist Hebert re-created a character or archetype Pere Duchesne, also the name of his newspaper, that transformed what had been a comic stove-merchant into a patriotic rough and witty old man who wore a liberty cap, smoked a pipe, and dressed like the sans-culottes. “Father Duchesne” or “Old Man Duchesne” became the angry voice of ordinary people. He embodied the voice of the toiler against the aristocracy but also the new bourgeoisie or middle class. Those familiar with the historian Morris Slavin, who made his mark late in life re-shaping what we understand of the left and the French Revolution, will wonder if Slavin influenced Abidor’s perspective on placing Hebert deeper in conversation with the sans-culottes.

Abidor includes a couple of texts by Sylvain Marechal (1750-1803), a French Revolution journalist who was a forerunner of utopian socialism or utopian anarchism based on an outlook of a future Golden Age where all resources would be shared. Marechal was not involved in the conflict between Girondins and Jacobins but later emerges as an ally of Gracchus Babeuf, in the revolt against Thermidorian reaction and the Directory. Marechal’s play celebrating reason may have been a success in his time but too much crime in the name of reason has unfolded since. But I find his lampooning of the Catholic clergy and its rituals still timely (and we must remember he was substantially thrashing ruling authority of his time as embodied in the church not one denomination).

While these sans-culottes clearly express anger and denounce not just the aristocrats but “moderates” in the midst of a social revolution, whom we must not forget would be deemed “progressive” today, especially in the dialogic pamphlets there is an ambiguity of taking responsibility for militant underground acts that authorities of course wish to criminalize. This will make for a many contoured conversation on what the sans-culottes and their spokespeople actually did.

Readers of these fugitive tracts that have found their way into the English language will think back to the turn of phrase “Pardon my French” that suggests foul language, and see that long before the Black Panther Party popularized the word “fuck” as an accompaniment to radical politics in the 1960s, the popular language of the sans-culottes of 1790s France used the f-bomb to denounce those that betrayed but also to accentuate an affirmation of those who were most militant, and uncompromisingly heroic, in their actions for a new kind of freedom.

If the instinct to popular self-management of the sans-culottes did not reveal a programmatic consistency in the 1790s, the truth is the idea of “a people’s republic,” a contradiction in terms to be sure, is still a false premise to be overcome in our own place in time. Further, the ambiguity of such a regime, that it can be a socialist state, capitalist state, or fascist state, cannot allow a mystification that all can only be discarded by ordinary people permanently arriving on their own authority.