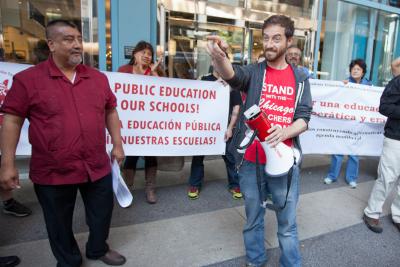 Teachers in British Columbia  are waging a fierce struggle for public education in their province. Their union, the British Columbia Teachers’ Federation (BCTF) needs our help. Many supporters of the fight for public education in this country don’t realize that the Chicago Teachers Union (CTU) and CORE (Caucus of Rank and File Educators) and the subsequent rebirth of teacher unionism in the US owe much to the BCTF. The involvement of the BCTF in international work has been a model for unions around the world. It's safe to say there would be no Trinational Coalition without the BCTF.  (The picture shows activists at a Trinational convention in Chicago emonstrating dlast May.) It’s time for us to repay the debt.

Teachers in BC have been on strike for two weeks. They have voted to send the current strike to arbitration and immediately open classrooms for the new school year as soon as government says yes. Briefly, the BC Supreme Court has twice ruled that the legal rights of BC teachers were violated when the government in 2002 brought in legislation that eliminated provisions from the teacher collective agreement. The government is appealing the judgement in order to force the BCTF to give up its rights. Since rotating strikes started in May, teachers have lost a full month of salaries and received only $200 in strike pay. Teacher unions in Ontario provided $1.5 million to support BC teachers.  Funds for a hardship fund have come from other donations, including some from teachers donating their strike pay for others who need it more. While the union has received support from other unions in the BC Federation of Labour, the government is taking a hard line.

What we can do: The BCTF is asking for letters and messages to be sent to the government.

A BC Federation of Labour rally in downtown Vancouver on Friday drew several thousand teachers, families and friends—enough to block the road in front of the provincial government offices.

You can follow strike news on a  Livestream channel which carries briefings for members and the media.

I write in support of the request of the British Columbia Teachers’ Federation for the BC Government to agree to arbitration of the collective agreement.

Teachers have been on strike to put in place conditions that we know from years of rigorously conducted research improve educational outcomes. The advantages in learning that accrue from reduced class sizes and resources to improve the ability to successfully integrate students with special needs into classrooms are well-documented.

It is in the best interest of the children, parents, and citizens of your province for the government to end this strike by agreeing to the BCTF's proposal to arbitrate the dispute. This will allow schools, teachers, and students in BC to  commence with their education and for the differences the government has with your teachers to be settled by an impartial hearing.

Each day the government delays in submitting this dispute to binding arbitration is a day lost to children's learning. I and many others concerned about education globally are watching news of this dispute and hoping for its speedy, just resolution.

Posted September 11, 2014 Education by newpolitics
About Author
LOIS WEINER writes widely about education, labor, and politics, specializing in teacher unionism. Her new book looks at lessons for the Left  in capitalism's alteration of work and education, and how teachers and their unions can resist with support to and of movements for social justice.