Strike statistics for 2019 are out. Is the strike wave continuing? 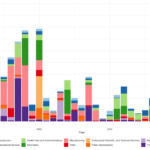 After a short decline in strike activity in 2017, strike actions exploded in 2018 driven by West Virginia educators—teachers, paraprofessionals, bus drivers, and other support staff—who walked out in a dramatic statewide strike. They were followed by educators in Oklahoma, Arizona, Kentucky, and other states as teachers and support staff fed up with years of cuts and demands to do more with less finally drew a line in the sand.

With a sense of continued momentum—2019 began with the Los Angeles teachers’ strike, and closed with the first major auto sector strike in over a decade and a long Chicago education strike—unionists feel that the strike wave is continuing. But is it? We turned to the latest Bureau of Labor Statistics numbers, released yesterday, to answer that important question: was 2018 a fluke?

Superficially, there’s a dip. The overall number of employees involved in work stoppages declined slightly in absolute numbers compared to 2018, though the number of large strikes (25, vs. 20 in 2018) and days idle (in other words, total days that workers were out on strike) increased. But raw numbers only tell part of the story. 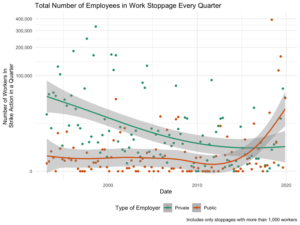 By analyzing detailed quarterly strike data since 1993 (the first year it’s on record from the Bureau of Labor Statistics) one thing is immediately apparent: the trend for strikes is on the upward swing in both the public and private sectors, and the upward trend continued through 2019.

But the economy is much more complicated than the public sector/private sector divide, and where strikes happen is crucial for understanding the state of worker organization and power. To look at that, we broke out strikes since 1993 according to their North American Industry Classification System (NAICS) designated sector. 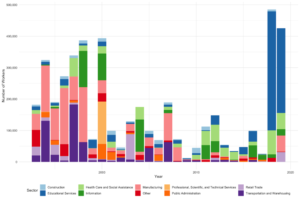 Looking at the past decade shows a clear pattern: education, healthcare, and to a lesser extent the information sector (usually in telecommunications) strikes made up a large majority of strike activity. This is a significant difference from 1993-2000; manufacturing and transportation and warehousing sector strikes made up the majority of strike activity.

Comparing 2018 to 2019 shows good signs. Manufacturing sector strikes spiked dramatically in 2019, led by the UAW and the General Motors strike. Retail—particularly the Stop & Shop strike, a rare major strike action against the New England grocer—also spiked dramatically. Although strike activity in 2018 was overwhelmingly healthcare and education, and although both were big shares of 2019, strike activity in both sectors declined while increasing elsewhere. That’s a good sign: strike activity almost exclusively concentrated in two sectors of the economy is unsustainable; the fact that it’s spreading shows that the strike wave has staying power.

So what were the major strikes in 2019, and what can those tell us? 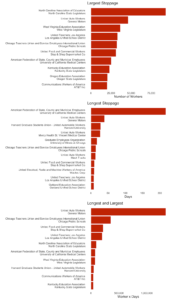 The biggest work stoppage in 2019 in terms of workers involved was where you’d least expect it: North Carolina, a right-to-work state with under 5% union density, and where public sector collective bargaining is banned. The North Carolina Association of Educators (NCAE), an affiliate of the NEA, staged a one-day work stoppage involving over 90,000 workers. It wasn’t a fluke: they did the same thing in 2018 with over 100,000 workers, representing the two largest work stoppages by number of workers involved since before the 2008 crash. This sends a clear signal: there’s room to organize in the South, particularly in gerrymandered and right-wing dominated states like North Carolina where basic norms of democracy are dead and buried.

Importantly, however, the most intense strike was the showdown between the UAW and General Motors. The UAW made significant contractual gains—uncapping profit sharing was a major win—after a grueling forty day strike which cost the “Big Three” automaker over $4 billion. The reason that’s important: large-scale strike action in the private sector is crucial to both make sure record profits end up in the pockets of workers, and to make sure that the strike wave continues to build labor militancy and power.

We saw some troubling signs in the Bureau of Labor Statistics union membership data released last month, though we made the case that they were far better than unionists expected in the wake of Janus v. AFSCME. But if there were troubling signs there, the strike statistics give unionists reason to smile.

Another key dimension separates these strikes from the large scale strikes of the 1990s: whereas those were largely defensive actions fought in manufacturing sectors under attack by offshoring and technological change, these strikes are clearly offensive actions. A manufacturing strike in the 1990s was, more often than not, fought to hold the line and avoid (often unsuccessfully) concessions and plant closures. Now, workers are using the strike weapon to advance and make gains. In an economy where profits are booming, but workers’ wallets are not, there’s no reason to believe increase labor militancy will decline in the coming year. The upward trend is clear.

What this data should tell unionists is simpler: we’re still on the upward swing, and now is the time to press our advantage. Strike waves can’t last forever; at a certain point, worker fatigue will set in and public opinion may shift. When this one starts to crest—a point which may well be years in the future, if labor presses its advantage now—where do we want our movement to be? If we use our power now, we can both build power and raise expectations for what the movement can and should achieve.

Posted February 14, 2020 Labor, Teacher unions, United States by newpolitics
About Author
C.M. Lewis is an editor of Strikewave and a union activist in Pennsylvania.
Kevin Reuning (@KevinReuning) is an assistant professor of political science at Miami University.