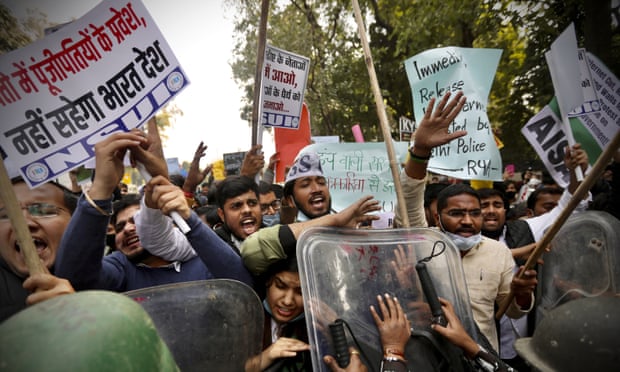 The ongoing Indian farmers’ protest in reaction to corporatisation of agricultural land and access to Mandis (open markets) demands an urgent legal reexamination of its impact on agrarian labour and small-scale farmers. These changes to market floor prices of farm products in India have been put in place as a product of a state-corporatist alliance under the Modi government. These signal a rolling out of corporatisation and bureaucratisation of Indian agriculture. In the absence of any agricultural and industrial labour alliance, Indian farmers, as primary producers, have taken to the streets outside of Delhi, aligning with farmers in the states of Punjab and Haryana. Their demands are to revoke all the proposed changes, which they call “anti-farmer”. The farmers view these changes as corporate handouts by the state, abusing the state machinery of legislation and laws. Some of the proposed changes is to remove the Minimum Support Price. This minimum price was a guarantee by the government against national economic recession or inflation and was outside of the corporate and market mechanism. The removal of the minimum support price will create greater anxiety and loss of sovereignty of the farmers to cultivate based on natural cycles of season. These changes have been passed in the parliament in September 2020 without first addressing the current problems of agricultural labour and land such as the Ceilings Act of 1961. These protests foretell how Indian farmers, who are already in debt, will become increasingly vulnerable to the fluctuations of open-market conditions.

It is important to mention that the current farm bills are different from the Green Revolution in the 60’s and the neoliberal reforms since early 90’s.  The Green Revolution was introduced to improve India’s food self-sufficiency due to the famine caused by years and years of intensive farming to raise taxes for the British during colonial rule. The famine was caused due to a cumulative ecological neglect which forced the Indian government to borrow wheat from countries like the United States. Most of the farmers who died belonged to lower castes or were marginal and small land holders. Under the Green Revolution, chemical fertilisers were used by Indian farmers to boost crop production and for a higher yield and to meet food sovereignty of the country. However, the Green Revolution in the long term caused agrarian distress as industrialisation and mechanisation of agriculture meant that only large landholders could benefit as they could buy the high yielding seeds. This gave the landed elites huge privilege over the marginal farmers and also gave rise to patronage-based politics where landed elites continued to build stronger alliances with regional political parties and to influence the regional state agendas of political economy of land reforms in their favor. States like Punjab too continued to face acute social and political conflicts which led to social differentiation of peasant class.

The proposed changes to the farm laws are an extension of the 90s neoliberal policy with the difference that now farmland will be sold through state-held auctions where the buyer of the land can be a global agro-food conglomerate. The farm land will become even more vulnerable to global market price mechanisms as the markets will be monopolised by predatory agrarian supply chain networks and urban retail outlets where farmers will be made to compete with each other to get highest bid for their crops. This neoliberal monopoly of vulnerable famers by the global agro-food market will aggravate agrarian distress as the farmers will take out higher interest loans in order to compete against global market forces.

Previously, the farmers were not competing against global forces and the supply chain network was controlled by a farming community which gave them a secured market access. The proposed farming bill is damaging as those farmers who cannot compete will sell their land to the highest bidder which will wipe out not only small-scale farmers but eventually the medium to large-scale farmers as well. Furthermore, while farmers will make instant cash, in the long-run, such transaction of land for cash will be fatal as land prices are ever fluctuating and more volatile than the cost of agricultural production.

In addition, the regulation of pre-existing land tenures, land deeds, land titles and contracts has meant exercising control over farmers’ associations. At the same time, the state’s assertion over farmers’ produce in large scale agricultural markets is to simplify the modernisation and mechanisation of farming practice itself. Attempting to open the market competition would also mean newer forms of debts and financialisation of the agriculture industry as farmers will turn to banks to meet the market demands of certain kinds of agricultural products.

However, the changes instigated by these new farm laws would lead to increasing fragmentation of major corporate demands and the ability of peasants to unionise. The latter consequence is especially troubling, since Indian labour is already fragmented along caste, gender and ethnic lines. Furthermore, the quality of such state-corporatist alliances requires further analysis on a state-to-state basis of areas such as commodity, supply chain disruption, and other market mechanisms.

The interference of state led corporatisation of farming will also mean that subordinate groups and classes will become organised, but their organisations will have to be acknowledged and legitimised by the state. The changes outlined in the agricultural acts might make the farmers feel less like farmers and more like entrepreneurs or the self-employed in the gig economy. Even if they manage to unionise, the state will create legal hurdles to question their legitimacy, impose conditions on memberships and require regular state monitoring. In short, in the long-run, state corporatism would involve an authoritarian and top-down relationship between the state and mass organisation.

The new agricultural laws will enable the agenda of liberalisation. This will also mean restructuring ideas of food politics and food security, which also include political power ideas about regulating community resources and its governance. The environmental consequence of market driven food agro-food industry would also mean loss of biodiversity of food and a subsequent degradation of soil. It also means a decline in cultural diversity of food practices in India which will negatively impact the self-sufficiency in food which varies from state to state in India. Since corporates will chase profit over sustainable farming, degradation of soil would mean further reduction in ground water which will also lead to a vicious cycle of endemic indebtedness and bondage of marginalised farmers whose labour will never be reflected in the market mechanisms of price control. This means increased disparities between primary producers and consumers; and finally, a greater impoverishment of the food industry in India.

Ironically, what is happening in the state-corporatist alliance in the process of land grabbing is not what Karl Polyani referred to in his revolutionary account of The Great Transformation where poor farmers were forced into selling their labour during the beginning of industrial revolution. He was referring to how the commodification of land creates a disjuncture between how land is governed between social communities and was embedded within social norms and social significance of natural resources and was not so commodified. However, the main propeller of a similar land grab and commodification of land in India is the state itself. In that, it raises several legal and political concerns of how land and natural resources should be governed. More importantly, a social wage such as the National Rural Employment and Gurantee Act (NREGA) needs to be restructured to accommodate a wider net of uninsured and vulnerable farmers as farming is an environmental-dependent sector and cannot be predicted and regulated by “markets”.

In open-market sales, no pre-existing agreements exist between buyers and sellers. However, the current proposed laws will lead to one-sidedness in the favour of huge buyers who will regulate and influence agricultural production. Farmers have no guarantees concerning what prices they will receive or how much they can sell. Finally, the implementation of these new legal changes to the farming industry in India will also affect the consumers and buyers as their choices will be determined by what is available at their local retail markets and how well it is connected to the supply chain.

These agriculture acts signal a worrying trend, since one of the fundamental goals of corporatism is to depoliticise labour relations and, accordingly, the law in India has prohibited ties between unions and political parties. The government in India needs to urgently adjust the demands of the social wages as safety nets for protecting farmers from the fluctuations of the market-driven food industry. The protests by Indian farmers are thus justified, as the new laws would dismantle the skeletal protections and regulations on which millions of them have relied for survival, and could have disastrous consequences. A lack of freedom to regulate the farm produce will negatively affect farmers’ labour movements, which are usually difficult to organise, and the resulting commodification would dispossess the peasants from their agricultural lands and lead to land degradation.  In the absence of intervention of an international regulatory framework or durable state welfare on which these farmers can rely, the proposed changes will have far-reaching consequences for regional policies, food sovereignty, and the farmers’ identity as global primary producers.