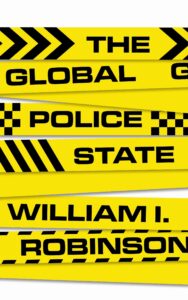 The storming of the United States Capitol on January 6 at the behest of then-President Trump, and with the tacit and active support of certain sectors of the state apparatus, has understandably reignited fears over the growth of a neo-fascist movement. And yet, the shambolic nature of the invasion, which saw adherents of the conspiratorial Q’Anon cult largely outnumber the organized far-right militias with combat training and military-style tactical gear, demonstrates that this movement remains largely inchoate after a full four years of Trump in offices—even as it grows bolder and increases its ranks.

It is possible that the events of November 6 may serve to “unite the right,” but an arguably more imminent threat to the development of a popular, mass-based democratic movement for radical change is the attempt by the ruling class and its political representatives to strengthen the already-formidable repressive apparatus of the state in the name of combating fascism and white supremacy.

As is well known, Twitter and Facebook moved swiftly to suspend Trump’s personal accounts in the days following the Capitol riot. Shortly thereafter, Amazon, Google, and Apple effectively pulled the plug on Parler, a messaging board with a more libertarian approach to censorship that was allegedly popular among the organizers of the invasion.

Meanwhile, tens of thousands of armed national guard troops poured into Washington, DC in the days leading up to Joe Biden’s inauguration, as much of the nation’s capitol experienced a virtual military occupation on top of a pandemic lockdown. The ceremonies went ahead without any serious disruption, but many of the troops are now due to remain for the duration of Trump’s second impeachment trial.

By the time lawmakers introduced the Domestic Terrorism Prevention Act of 2021 into both houses of Congress on the eve of Biden’s inauguration, promising to grant more power to the FBI, the Department of Homeland Security, and the Department of Justice to combat acts of “domestic terrorism and white terrorism,” dozens of rioters had already been arrested and charged with crimes by federal agents. To be clear, some of these individuals should face prosecution. But anyone concerned about the future of the left ought to think twice before getting behind the drive to empower Silicon Valley and the national security state—which was recently rehabilitated in the eyes of liberals during the Trump administration—simply because they appear to be targeting the far right for the moment.

These institutions have a long and sordid history of repressing left-wing forces in the United States, from the FBI’s COINTELPRO and more recent targeting of so-called “Black identity extremists” to the kidnapping of protesters in Portland by DHS agents in unmarked vans last year—let alone ICE’s longstanding terror campaign against immigrant activists. In the fight against so-called “fake news” and “disinformation,” Google and other Big Tech platforms have repeatedly reworked their opaque algorithms to demote critical left-wing websites, and at times have carried out targeted purges.

But it is not only in the US that we see the fusion of Big Tech with militarized police forces and the slide into anti-democratic and authoritarian political systems. As William I. Robinson demonstrates in his prescient book, The Global Police State, these are worldwide trends rooted in the structural contradictions of contemporary global capitalism.

In simple Gramscian terms, the concept of the global police state calls attention to the breakdown of capitalist hegemony and the turn toward coercive domination on the part of the global ruling class, as more and more global economic activity becomes centered around the development and deployment of mechanisms of mass social control, repression and warfare.

From a purely economic perspective, the roots of the global police state lie in the crisis of overaccumulation. With declining wages and truly astonishing levels of global inequality leaving masses of humanity unable to consume the commodities on offer in the dog-eat-dog world of the marketplace, the transnational capitalist class has resorted to debt-driven growth, the raiding of public finances, and the type of wild financial speculation of which the recent Game Stop saga is but the tip of the iceberg—all in a frantic attempt to unload its surplus and stave off stagnation.

At this point, the global ruling groups appear to be betting on a new round of growth through militarized accumulation and the digitalization of social and economic life, redounding to the benefit of a small number of intensely powerful transnational corporations and billionaires with close ties to the military industrial complex. Robinson marshals an impressive array of empirical data to show global capitalism’s built-in war drive, and the inseparability of “defense” contractors from Silicon Valley and the lords of finance.

Amazon’s founder Jeff Bezos sits on the Pentagon’s Defense Innovation Advisory Board and publicly defended his company’s ties with the military when rival Google dropped out of the bidding for a $10 billion cloud computing contract that was ultimately awarded to Microsoft. Bezos, Facebook’s Mark Zuckerberg and Alibaba’s Jack Ma each saw their respective net worth increase by $73 billion, $45 billion, and $18 billion from the beginning of the Covid-19 pandemic through mid-September of last year, and the world’s 500 richest people added $813 billion to their fortunes between January and October.

Meanwhile, workers everywhere are being expelled from the labor force and thrown into the ranks of surplus humanity due to widespread automation and lockdown-related closures. The result is a brewing crisis of political legitimacy for capitalist states tasked with simultaneously reproducing the conditions for transnational accumulation and somehow winning legitimacy from the popular majorities crushed by this model of development.

In short, the global police state is a project to attenuate the twin crises of overaccumulation and political legitimacy from within the global capitalist order. On the one hand, transnational capital must find new profitable investments for capitalist accumulation to keep chugging along. On the other hand, it must stave off any viable transformative project from below that threatens its continued rule. There is a convergence, then, around the need to keep profits flowing and to stifle counter-hegemonic dissent.

Political repression may take many forms, including updating old-fashioned union busting techniques for the digital era. Amazon has come under fire for posting a job listing for two analysts tracking “labor organizing efforts against the company” as part of its “Global Intelligence Program,” but it already monitors its employees’ social media posts and deploys heat maps to track potential unionization campaigns in its Whole Foods stores. Walmart, which plans to roll out a network of automated micro-fulfillment centers in order to compete with Amazon on its “last mile” of delivery, has an intelligence unit of its own that works with weapons manufacturer Lockheed Martin, is run by an ex-FBI agent, and mainly employs former government intelligence operatives.

In India, where 250 million people participated in the largest strike in world history last year, the neo-fascist-tinged government of Narendra Modi has deployed facial recognition technology to arrest protest leaders in its ongoing standoff with millions of farmers protesting the liberalization of the country’s massive agricultural sector. But let us not forget that the Corona Crash has only intensified these festering contradictions, and that the months preceding it also witnessed mass democratic uprisings and military coups around the world—from Lebanon, Algeria, and Iraq to Sudan, Chile, and Bolivia.

And yet, Robinson points out that there is a disconnect between resurgent mass social movements and an institutional left “that has lost the ability to mediate between the masses and the state with a viable project of its own.” Here, I would add that the periodic but spontaneous outbursts of mass mobilization we have seen in the US—most recently in the aftermath of the murder of George Floyd—do not constitute a mass social movement in and of themselves.

Some have argued that it is precisely the political weakness of the working class that makes contemporary comparisons to the rise of fascism—which has always been a project to destroy socialist and communist movements—off the mark. For his part, Robinson has been warning for over a decade that, unlike its 20th century predecessor, 21st century fascism represents a preemptive strike against a nascent socialist movement, and that it need not dispense altogether with the formalities of bourgeois democracy.

But if Robinson is right to point out that the global police state is a more analytically robust concept than 21st century fascism, the somewhat contradictory relationship between the two deserves more careful consideration. Just as Amazon can simultaneously donate millions of dollars to “racial justice” organizations with one hand, while fire (and smear as “not smart, or articulate”) a black assistant manager for leading a warehouse walkout demanding more protective gear, hazard pay, and transparency with the other, we need to be wary of allowing the global police state to gain strength under the guise of fighting fascism.

To be sure, socialists must participate in a United Front against fascism whenever it presents a clear and present danger. But with Joe Biden in the White House, liberals cheering on the national security state, and the labor movement—and the power of socialists within it—much weaker than during the 1930s, this is not a particularly useful guiding principle for the immediate future.

The only way to beat back the emergent global police state is to simultaneously risk summoning it into existence; namely, through deep organizing within—and building institutions of—the global working class in all its diversity.

Posted February 17, 2021 Civil Liberties/Repression, Far Right by Phil Gasper
About Author
David B. Feldman is a PhD candidate in Sociology at the University of California, Santa Barbara.