Is it still fascism if it’s incompetent? 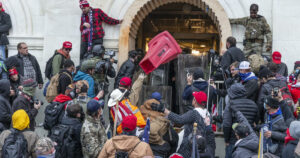 The fact that Wednesday’s desperate effort to subvert liberal constitutional law fizzled out, largely reflects the inchoate state of this phase of fascism’s development.

What we’ve been seeing over the last few years are speculative attempts, experimental forays, laying the cultural and organizational preliminaries for the mainstreaming of a violent, extra-parliamentary right. There is, for instance, no Modi without Gujarat, and no Gujarat without Ayodhya. It takes time to develop the coalitions of forces, in and beyond the state, to mainstream cultures of cruelty and violence, to erode the commitment of the liberal bourgeoisie to liberalism, to demoralize the Left, and terrorise minorities. I’m not suggesting that the inchoate energies of Trumpism, which the last election demonstrated are expanding significantly, are equivalent to the BJP/RSS in their ideological coherence, organizational clarity and social depth. They are not. I’m drawing the analogy to indicate that we are not even close to the end point of this phenomenon.

This armed breach of the US capitol, incited by Trump, and supplementary to efforts by pro-Trump Republican senators to overturn the election result, could not have happened without the connivance of DC police, with some role played by the Department of Defense. Had it been any other protest movement, they would have been repelled – and brutally so, with maximally disproportionate violence. This is the state which bombed the MOVE headquarters, and fired shells into the Waco compound. Instead, DC police opened the gates and allowed the armed far right to break into the capitol, and stood watching as they walked around looking for elected politicians to confront – and then what? They allowed it to spiral to an actual shoot-out, in which they eventually shot a woman in the neck. They called for back-up from the National Guard, in response to which the Department of Defense stalled for time by saying they were ‘considering’ it. Only after nearly lethal violence was the Guard dispatched. The Pentagon, of course, is under acting secretary Christopher Miller after his predecessor, Mark Esper, was removed on 9th November for opposing Trump. Esper was among the ex-Pentagon officials who warned about a coup. My speculation is obviously that the Pentagon stalled under pressure from Trump, in order to give his guys the full beer hall putsch experience.

The alliance between the far right, the police, and a faction in the executive branch has been repeatedly consolidated through violent street campaigns under Trump: in anti-lockdown protests, in anti-BLM vigilantism, and in the Oregon wildfires. The dialectic between street violence and authoritarian state crackdown on the right’s enemies has been a visible part of Trump’s strategy. And that dialectic of mutual radicalization – so critical to fascism in its mature phase – dignified by anticommunist hysteria, played a critical role in expanding his base in the November elections. Had the results been even closer than they were, mark you, these protests would be much bigger and more dangerous. A crucial reason why these protests are thousands-strong, and not tens of thousands-strong, is that the outcome was conclusive enough to be demoralizing. Had that not been the case, the legal challenges, supplemented by minatory phone calls from Trump, and armed flash mobs, would have made the Brooks Brothers riot look like a picnic.

This desperado putsch will be as easily contained as Trump’s numerous vexatious legal and political challenges to the electoral outcome. The Republican defeat in Georgia, probably hastened by the same ideological intransigence that cost them the national election, will add to the demoralization of the Right. Demoralization is demobilizing. However, the undercurrent of anger, the betrayal myth (‘our vote was stolen’), and the alternative Trump reality that is widely shared by Republican voters, is going to be stoked in the coming years by an elaborate, skillful far right disinfotainment industry. The main growth industry, coming out of that, will be two forces: lone wolf shooters, and conspiracist vigilantism. The latter – from pizzagate to the QAnon supporter who shot a mobster, from the Nashville 5G bomber to the pharmacist who deliberately sabotaged vaccines and then supplied them to customers on the basis of anti-vaxxer conspiracy theories, from the Infowars hoax bomber to the Oregon vigilantes and anti-BLM militias – is rooted in American tradition.

This is inchoate fascism, fascism in its experimental, speculative phase, in which is forming a coalition of minoritarian popular forces with elements in the executive and the repressive wing of the state. It would be devastatingly stupid, complacent beyond belief, to expect US democracy to remain sufficiently stable in the coming years to deny this incipient fascism more opportunities to congeal, and grow. Don’t tell me that the US bourgeoisie will never support fascism because liberal democracy is working well enough. Don’t tell me that fascism won’t gain a foothold in a society where the Left has been weak for decades, and much of the labor movement barely has a pulse. These points are beside the point. Fascism never grows in the first instance because the capitalist class rallies behind it. It grows because it draws around its nucleus those whom Clara Zetkin described as “the politically homeless, the socially uprooted, the destitute and disillusioned”. And incipient fascism has shown, from India to the Philippines, that it does not need a strong communism to react against: Ernst Nolte’s hypothesis was incorrect. There is an urgent need for an anti-fascist movement in the United States.

Posted January 8, 2021 Far Right, United States by Phil Gasper
About Author
Richard Seymour is the author of several books, including Corbyn: The Strange Rebirth of Radical Politics (Verso, 2016) and The Twittering Machine (Indigo Press, 2019), and a founding editor of Salvage magazine.