Spotify Itself Is Misinformation 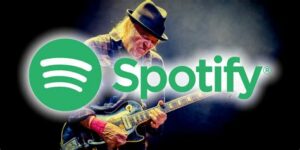 Last week, in the wake of Neil Young’s spat with Spotify and Joe Rogan, hand-wringing about misinformation on tech platforms reached new heights. The “M” word was everywhere. The Boston Globe, New York Times, Guardian, Washington Post, and several other papers all ran op-eds decrying Spotify’s complicity with it. Roxanne Gay’s piece in the Times, “Why I’ve Decided to Take My Podcast Off Spotify,” used the word seven times. The musicians at the heart of the controversy also tried it on for size. “Spotify has recently become a very damaging force via its public misinformation and lies about COVID-19,” wrote Neil Young in the first sentence of his public statement. “[I cannot] continue to support Spotify’s life threatening misinformation to the music loving public,” he added later.  Joni Mitchell and others concurred.

They’re not wrong, of course. As the chorus has noted ad nauseum, Spotify is helping Joe Rogan to fuel flames that are in some instances killing people, and that’s tragic. But like so many appeals to the truth by well-meaning celebrity-artists who are nonetheless of a privileged class, these outcries are ultimately distractions, revealing unflattering things about our political priorities while treating only symptoms and not the cause. What is it, for instance, that has allowed misinformation to flourish in the first place? For Branko Marcetic, it is the failures of our institutions to cultivate and sustain public trust—a problem that, by several orders of magnitude, exceeds the damage done by the blatherings of a single moronic podcast host and a handful of his guests.

But to the above question, I’d add another that not enough commentators—particularly musician commentators—have been asking this week: what is it that allows Joe Rogan’s show to exist on Spotify in the first place? The answer is money. And more specifically, money that the company has earned by normalizing the exploitation of thousands of musicians behind its benevolent techno-utopian facade.

In other words, Spotify’s entire existence is a form of misinformation.

Stream by stream, the platform legitimates the false notion that music isn’t the product of work done by workers who deserve to be adequately compensated for what they produce. At the very least, it legitimates the ludicrous idea that $10/month (or, for artists, an average of just $0.003 per stream) is enough to pay for it all. This is misinformation in the sense that any product of capitalism is misinformation: the promissory allure of the commodity—in this case, frictionless access to all of the world’s music for a low price, just an inconsequential click away—conceals the very consequential realities behind its production. Add in the fact that the service’s global reach would seem to indicate some sort of moral rectitude and you have a perfect recipe for deception.

To be sure, music streaming in general has contributed to this devaluation of music (and thus of musicians) by detaching it from its more tangible media—CDs, LPs, mp3s, and other discrete things that must be paid for and that have traditionally stood in as material proxies for the musical work itself. But let’s not complicate things: we’re talking about simple compensation here. What Spotify and other services have done is to take advantage of this frictionless music reality to hook consumers, exploit thousands of artists, and reap huge profits—$11 billion in revenue for 2021 alone—while distorting the value of creative work for society at large.

Again, this is a kind of misinformation. And what makes it a kind of misinformation is precisely what makes it difficult to see as such: the fact that we have entirely normalized it. It is so normalized, in fact, that this misinformation has few places left to spread; Spotify has over 406 million users, and among them are presumably the critics who rail against the podcasts it chooses to host. Of course, this isn’t to put the blame on consumers. If misinformation requires belief to propagate, then Spotify is itself a form of belief, one that, in its ubiquity, does our believing for us. It doesn’t matter how individual users feel about Spotify’s ethics; its sheer reach represents belief on a more consequential terrain, a belief that, underwritten by capitalism, is baked into the social subconscious itself.

But we can just as well leave it at the fact that Joe Rogan’s misinformation is paid for by the embodied corporate misinformation of the service itself. Spotify’s latest abuse of its power stems from its power to abuse artists. Joe Rogan’s podcast is underwritten by a form of theft. If these connections between Spotify and COVID-related misinformation seem too tenuous for some, we can always link the company’s exploitative practices to the virus in more direct ways. Consider the fact that musicians have increasingly had to look to touring to make up for the income lost to reductions in streaming royalties. We can only assume that a significant number of those same musicians, desperate for cash amid the pandemic, have returned to gigging in unsafe conditions when they otherwise might have been able to wait it out. And surely many of those musicians have paid a price.

When spokespeople and talking heads take on Spotify, they’re hardly obligated to address each and every one of the company’s wrongs. And failing to mention some of those wrongs does not necessarily mean endorsing them. Yet critics must understand—and some have this week—that by allowing themselves to get sucked into these stories of the minute while allowing deeper structural problems to go unaddressed, they do little but give the company cover to continue doing deeper, more malicious forms of damage. Because of the recent hand-wringing over Joe Rogan, Spotify’s greatest sin right now—at least in the public eye—is letting a charismatic dufus and his guests recklessly peddle bullshit for a few minutes each week, not contributing to the immiseration of an entire creative class for over a decade. We know how this story ends: toothless symbolic actions will be taken. The blowback will blow over. And the company will get on with its exploitative ways.

It certainly hasn’t helped that, somewhat confoundingly, it is artists themselves giving the company its cover of late. And what better cover could there be? If artists are speaking out against Spotify but not mentioning the company’s exploitative practices, then surely the issue of inadequate compensation is old news.  But what type of artist? It’s an essential question if we’re to understand the full ideological nature of this controversy. That musicians like Neil Young and Joni Mitchell, who do actually make some cash from Spotify, are the ones getting pissy over Rogan without so much as mentioning the issue of payment is a perfect example of a culture-wars crusade that is also a covert class politics: the politics of the class that has lost sight of material concerns. In criticizing Spotify, Neil Young isn’t speaking for artists; he’s speaking for the professional class and the rich.

If this reading strikes anyone as a stretch, consider the fact that Young, in his statement about pulling his catalog, went so far as to thank his record label, Warner, which brought in $5.2 billion in 2021, for “taking a hit.” He repeated this thanks three more times. It’s  the major record labels, of course, that are largely the reason that lesser-known musicians get paid a pittance on the service; big labels use their leverage to negotiate better deals for their artists, using secretive contracts to secure spots on playlists that ensure streams, among other de facto pay-to-play inequities. They also hog royalties that are easier to miss when you don’t have Young’s millions. Between streaming services and labels, then, the latter are just a lesser evil. Thanking a major label only adds to the sense of unease musicians should feel amid this latest drama.

This week, in an effort to push listeners to other streaming services, Young piled on the corporate love: “Amazon has been leading the pack in bringing hi-res audio to the masses, and it’s a great place to enjoy my entire catalog [sic] in the highest quality available. Thanks also to Apple Music (I LOVE APPLE) and Qobuz for sticking with my high res music,” he tweeted. Sure. Lavish praise on the corporate giants whose pay practices are hardly better than Spotify’s. If you can’t beat ‘em, join ‘em. I have no doubt that Neil Young, if asked, would say that he resents the way artists are paid by Spotify; his public politics have always at least gestured to the left. And I have no doubt that, if asked, many of the journalists covering this story would as well. But by not drawing attention to the larger picture here, a failure that has such consequences for a politics rooted in material concerns, they are helping to spread a form of misinformation themselves.

Spotify couldn’t have asked for a better distraction from its wretched business model.