Support Ukraine! Russia Get out! No U.S. or NATO War! Down with Putin! 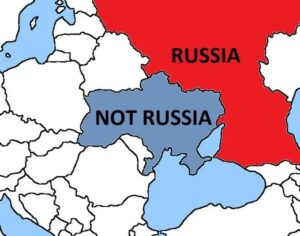 Earlier today Vladimir Putin ordered an invasion of Ukraine, an act of naked aggression in violation of every democratic norm. Russia has launched cyberattacks and its planes, missiles, and artillery have bombed targets in many Ukrainian cities, as its troops have invaded the country from the North, East, and South. Already there have been many deaths and great damage to the country’s infrastructure.

Russia’s invasion is an act of blatant imperialism aimed at dismembering Ukraine by taking parts of its territory—and perhaps even at seizing the entire country and installing a Russian puppet government in Kyiv. Putin claims that Ukraine is not a real nation, that it is a tool of the United States and NATO, that it has a Nazi government, and that it is carrying out genocide against Russian-speakers in Donetsk and Luhansk. None of these claims are true. All of them are lies to justify Putin’s imperial ambitions to expand Russia and recreate something like the old Tsarist and Soviet empires.

As socialists in the United States, we condemn Putin for this invasion of Ukraine. We support Ukraine’s independence and territorial integrity, and the Ukrainian people in their resistance to the invasion. We declare our solidarity and our aspiration to work with the Ukrainian left, labor unions, and popular organizations in their struggle for national defense, peace, democracy, and democratic socialism. We also stand with Russian anti-war activists.

At the same time, we condemn the expansion of NATO into Eastern Europe, a willfully provocative policy that has allowed Putin to invoke threats to Russia’s security as an excuse for his aggression. And we call for restraint by the United States, NATO, and the EU. Russia’s invasion must not be allowed to trigger a wider European war or, worse,  a world war, with the appalling  danger of the use of nuclear weapons.

We demand the immediate withdrawal of all Russian troops and mercenaries from inside Ukraine, including Crimea, and from the Ukrainian border. We call for immediate negotiations involving Ukraine, Russia, the EU, and the United States to establish a truce. We call for a genuine neutralization of Ukraine. Not only must Ukraine be free of Russian domination. NATO must also guarantee that Ukraine will not become a member.

While Russia continues its aggression against Ukraine, we call for protests at Russian embassies and consulates around the world. Global protest and solidarity are absolutely essential for stopping Putin, restoring and safeguarding Ukraine’s independence, and bringing a progressive resolution to the crisis. We must rebuild the U.S. peace movement on the basis of opposition to U.S. imperialism and to the imperialism of all other powerful states, and on the basis of solidarity with people in every country who are struggling for freedom and social justice.

(affiliations for identification only)

One comment on “Support Ukraine! Russia Get out! No U.S. or NATO War! Down with Putin!”