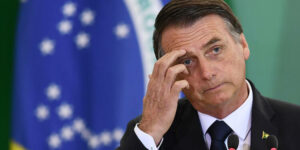 The year 2021 ended with floods inundating parts of Brazil’s northeastern state of Bahia, killing over 20 people and leaving thousands without homes . Rui Costa, Bahia’s governor, told reporters that this was the “biggest disaster in the history of Bahia.”  While on vacation in the southern state of Santa Catarina  and knowing that Bahia needed all the help they could get, Brazil’s president, Jair Bolsonaro, rejected aid being offered from Argentina (what amounted to 10 men to help with disaster response efforts), stating in a tweet that it was “very expensive for Brazil” and that the “armed forces in coordination with the Civil Defense were already providing those types of assistance.”

Bolsonaro had likely rejected Argentina’s disaster relief assistance for other reasons given that he had shown no such concerns about costs when Israel had sent 11 firefighters to help contain forest fires in the state of Amazonas back in 2019 coupled with the fact that Argentina’s president, Alberto Fernandez, sits on the opposite side of the political aisle — someone who Bolsonaro once called a “red bandit.”  Following backlash from his decision to reject aid from Argentina, Bolsonaro announced a R$700 million (~$126.5 million USD) credit line to help those affected by the floods.  Bolsonaro’s languid response to Bahia’s floods — all while one of Brazil’s deadliest pandemics overwhelms the healthcare system and decimates the economy — may serve as both a reflection of the presidency of the former army captain and an omen for what is yet to come.

Bolsonaro’s time in office has been marred by controversies ever since he was sworn in back in 2019 following “Lava Jato”, one of Brazil’s most high-profile corruption investigations, partially funded by the US Department of Justice, that led to the imprisonment of his political rival: former Brazilian president Luiz Inácio da Silva  (or “Lula” as he is more commonly referred to). By the time elections were taking place, Brazilians were tired of the corruption that had long plagued Brazilian politics. At the time, a poll from the Brazilian Institute of Public Opinion and Statistics (IBOPE) found that corruption topped the list of Brazilians’ concerns.

Appealing to the frustrations of the population, Bolsonaro appointed Sergio Moro, the federal judge who convicted Lula on corruption charges, to head the Ministry of Justice. Moro’s time serving as the head of the Ministry of Justice was short, quitting 15 months later citing Bolsonaro’s inappropriate interference with the federal police.  Following Moro’s departure, the Brazilian real lost nearly 4% of its value the day of his resignation. Daniela Casabona, a financial advisor at FB Wealth, pointed out that: “We see a government that’s collapsing in the middle of a pandemic.” That was back in April of 2020 when the number of COVID-19 cases in Brazil was nearly 53,000 and the number of deaths was 3,670. Fast forward to 2022, and it is clear that the COVID-19 pandemic was neglected at the federal level.

As Brazil’s total number of recorded cases of COVID-19 surpasses 22.3 million, Bolsonaro’s now infamous moment when he called COVID-19 a “little flu ” has aged poorly as his neglect of the pandemic has lowered over 633,000 Brazilians into their graves. The pandemic has driven the Brazilian healthcare system to the brink of collapse. Ana de Lemos, the executive director of Doctors Without Borders in Brazil, said “We have never seen a failure of the health system of this magnitude.” She also added that: “we don’t see a light at the end of the tunnel.”  The northern and northeastern states, where human development index scores are lower than the rest of the country, saw some of the worst in-hospital mortality rates in the country . In January of 2021, hospitals in the northern city of Manaus had run out of oxygen supply. As a result, Venezuelan President Nicolas Maduro sent a convoy of trucks carrying supplies of oxygen to Manaus . Brazil’s Air Force had also sent over 8 tons of equipment, including beds and oxygen tanks, to the northern city.

Even though Bolsonaro has remained skeptical of COVID-19 vaccines — even going as far as to claim that the vaccines may raise the chances of contracting AIDS  — over 69% of the population has been fully vaccinated, which has helped to bring down the number of daily deaths from COVID-19. Former Minister of Health, ” Bolsonaro’s response to the COVID-19 pandemic and the subsequent suffering from his failure to adopt a science-based approach may be one nightmare; however, his imploding economy is another nightmare that he cannot vaccinate his way out of.

Even before the COVID-19 pandemic, Bolsonaro’s economy was in the decline. He inherited an economy that was on a decade-long downward trend, with a GDP that peaked in 2011 at about $2.616 trillion dropping substantially to $1.878 trillion by 2019. To try and reverse this trend, Bolsonaro picked economist Paulo Guedes to be the secretary of the economy. The Guedes appointment seemingly contradicted Bolsonaro’s campaign rhetoric of anti-corruption given that when Bolsonaro selected him, he was under 2 different investigations for fraud involving investment funds .  Guedes’ economic agenda was clear: privatize, privatize, privatize. In 2020, Privatization Secretary Salim Mattar announced the government’s plan to sell off state companies like Correios (postal service), Telebras (telecommunications operator), and Casa da Moeda (mint).

Some of the only success Bolsonaro has seen with his privatization-oriented agenda was the selling off of some of Petrobras’ subsidiaries like BR Distribuidora, Transportadora Associada de Gas, and Liquigas . The government also sold off Rio de Janeiro’s water and sewage treatment for R$22.7 billion (~$4.1 billion USD).

When Bolsonaro was entering office, his privatization plan was partly focused on paying off public debt. Brazil’s debt had hit nearly 76% of GDP which Bolsonaro’s administration intended to help alleviate by using funds obtained from selling off state enterprises.  But as Bolsonaro’s presidency enters its last year, Brazil’s debt relative to GDP has climbed to over 90%  while the population grapples with an inflation-battered economy coupled with high interest rates.

Just when things could not get any worse for Bolsonaro’s re-election prospects, another problem emerged (or reemerged): Lula. The former president and founder of Brazil’s Workers’ Party or Partido dos Trabalhadores (PT) had returned to the forefront of Brazil’s political limelight after he was released from prison following the Brazilian Supreme Court’s decision to annul his corruption convictions. Lula’s return has engendered nostalgia for a time when Brazil had seemingly reached its apogee. When Lula left the presidency in December of 2010, his approval rating had reached 87%, according to a survey from IBOPE . His administration had seen a GDP increase of $2 trillion, turning Brazil into the 7th largest economy in the world.  Lula pursued policies that accelerated Brazil’s economic growth while also reducing poverty and inequality. This economic boom was helped, in part, by soaring demand for commodities, especially from China.

As it stands, Brazilians seem to favor a Lula presidency over four more years of Bolsonaro. A poll conducted by Inteligência em Pesquisa e Consultoria (IPEC) back in December found that 48% of respondents would vote for Lula. The same poll found that only 21% of respondents would vote for Bolsonaro. Bolsonaro’s failure to deliver on the economy and his atrocious response to the COVID-19 pandemic may be the main reasons why his approval rating, as of November, sits at 19%. As the oxygen around Bolsonaro begins to thin, the sitting president has less than a year to sway voters to support him this upcoming October. But as the price of staple foods  and gasoline  continue to increase and over 633,000 Brazilians dead from COVID-19, his prospects for re-election seem slim.