A Split at the Top: The Bourgeoisie Begins to Abandon Trump 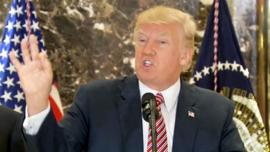 President Donald Trump’s failure for two days to condemn the violent Ku Klux Klan, neo-Nazis, and "alt-right" white supremacists, one of whom murdered a woman in Charlottesville, has led to a major development as sections of the capitalist class have begun to abandon him. While some top Republican leaders have taken a stronger stand against Trump in recent days, several major corporate leaders have deserted him. They have done in part because of his flirtation with fascism, but also because Trump and his administration—his embarrassing tweets, the constant circus, the Korea war scare, the Russian imbroglio—makes it impossible for the Republicans to advance their pro-business agenda. If the relationship between Trump and corporate leaders continues to unravel, this could lead to a more rapid collapse of the Trump presidency than had previously seemed possible.

After the Charlottesville events, many Republican Party leaders criticized the president and some condemned him. Virtually every Republican leader issued a statement against white supremacy, from speaker Paul Ryan of Wisconsin to former presidential candidate Mitt Romney.

Others spoke out against Trump himself. Senators Ben Sasse of Nebraska, Jeff Flake of Arizona and Marco Rubio of Florida often disagree with Trump, but the critics also included prominent conservatives such as Sens. Orrin Hatch of Utah and Cory Gardner of Colorado. Hatch said, “We should call evil by its name. My brother didn't give his life fighting Hitler for Nazi ideas to go unchallenged here at home.”

At about the same time, a number of major business leaders broke with the president. Four CEOs resigned from presidents Manufacturing Advisory Council. The first to do so was Kenneth Frazier, CEO of Merck Pharmaceuticals and one of America’s most prominent black executives. Three others joined him: the CEO of Intel, Brian Krzanich, the CEO of Under Armour, Kevin Plank, and the president of the Alliance for American Manufacturing, Scott Paul.

Frazier wrote on Twitter, “Our country’s strength stems from its diversity and the contributions made by men and women of different faiths, races, sexual orientations, and political beliefs. America’s leaders must honor our fundamental values by clearly rejecting expressions of hatred, bigotry, and group supremacy.” The following day, Inge Thulin, CEO of 3M resigned, and so too did Campbell Soup CEO Denise Morrison. Some CEOs who stayed on the council expressed fear of reprisal should they resign.

Trump’s other business group, the Strategy and Policy Forum began to discuss the possibility of disbanding, and Stephen Schwarzman of Blackstone Group LP planned to inform Trump, but before he had the opportunity, Trump announced on Aug. 16 that he was abolishing both of his business councils.

Other businesspeople were also critical of the president. Javier Palomarez, the president and CEO of the US Hispanic Chamber of Commerce, and a member of Trump’s Diversity Council, criticized Trump, calling his response to Charlottesville “shallow, belated and feckless.” “Denouncing white supremacy without equivocation and without reservation should have been a no-brainer for President Trump.”

As the New York Times noted:

Many more chief executives spoke out against racial discrimination and white supremacy, including Timothy Cook of Apple, Lloyd C. Blankfein of Goldman Sachs (neither of whom sits on a presidential advisory council) and Jamie Dimon of JPMorgan Chase (who does).

General Electric issued a statement saying that it had “no tolerance for hate, bigotry or racism,” but said that its chairman, Jeffrey R. Immelt, would remain a presidential adviser.

All of this is reflected within the White House in the struggle between Chief of Staff John Kelly, a former Marine Corps general, who is allied with the president’s daughter Ivanka Trump and her husband Jared Kushner, and another former general H.R. McMaster, who is Trump’s National Security Advisor, against Steven Bannon and other "alt-right" advisors to the president.

There have been renewed calls for Trump to fire White House aides Steven Bannon, Stephen Miller, and Sebastian Gorka. The Hispanic Chamber of Commerce issued a statement saying,  ”If the president wishes to maintain any credibility with the Hispanic community and other minority communities, he needs to purge his administration of all those who disparage diversity and inclusivity. Firing Steve Bannon is the first step—and a needed step to begin the process of healing the bad feelings this administration has engendered.” Rupert Murdoch, the acting head of the conservative Fox News, also called upon Trump to fire Bannon.

The big banks’ abandonment of Trump—Blankfein of Goldman Sachs and Dimon of JPMorgan Chase—may signal the beginning of the end of the president’s tenure. JP Morgan Chase’s advertising slogan is “So you can…” And when Chase turns on a politicians, the slogan might be rephrased as “So you can’t…” With Goldman and Chase giving up on him, Trump may be all washed up.

Posted August 16, 2017 Electoral Politics, United States by Dan La Botz
About Author
DAN LA BOTZ is a Brooklyn-based teacher, writer and activist. He is a co-editor of New Politics.