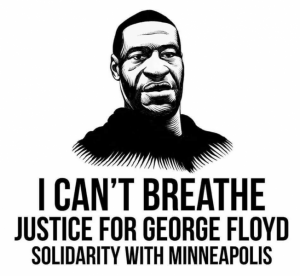 The video recording of the murder of George Floyd in Minneapolis on May 25, a black man strangled to death by a white police officer who kneeled on his throat for nine minutes until he was dead, sparked anger and outrage and has led to a full-scale national rebellion against police racism and violence as protests spread across the United States. What often began as peaceful demonstrations became violent clashes between demonstrators and police in at least 75 cities where buildings and police cars burned, stores were looted, many people were injured, and at least four were killed. The protests are reminiscent of the ghetto rebellions of the 1960s and 1970s and a more militant version of the Black Lives Matter movement of 2014.

The upheaval takes place in the midst of the continuing spread of the coronavirus that has taken the lives of 105,000 people nationwide and where a national shutdown in response to the virus had brought about an economic depression with 43 million unemployed. Yet thousands decided that protesting Floyd’s murder was more important than maintaining social distance to stop spread of the virus.

Floyd’s last words, “I can’t breathe,” were the same as those of Eric Garner, murdered by police in New York in 2014, one of the incidents that ignited the Black Lives Matter movement. And only a short time before Floyd’s murder, on February 23, Ahmaud Arbery, an unarmed black man out jogging, was videotaped as he was shot and murdered by a former police officers and his son in Georgia. Floyd’s death was simply the latest among dozens of unjustified police killing of black men and women over the last decade, and hundreds more over the last century, these killings the most vicious expression of the profound racism that pervades American society in every area of life, from health care and education to jobs and housing. In America, black people are three times as likely as white to be killed by police.

Floyd’s murder was the last straw. The protests initially erupted in Minneapolis because though the four police officers involved in his killing were all fired, no one was indicted for murder. Then the state indicted only the officer who had actually killed Floyd, letting the other three who had been accessories go free. Within a week protests—first peaceful and then turning violent—occurred in one city after another, sometimes cities where police had recently killed other black people, as in Louisville, Kentucky where police had broken into the home of Breonna Taylor, a 26-year old medical technician, and shot her eight times, killing her. Black people have been at the front of these protests, but everywhere white, Latinos, and Asians have also joined.

Everywhere some businesses were burned, but the response of one businessman in Minneapolis was remarkable. Ruhel Islam, a restaurant owner who immigrated from Bangladesh 24 years ago to escape state violence, saw his business burn to the ground. He told the press, “Let my building burn. Justice needs to be served and those officers need to be put in jail.”

In response to the protests, mayors established curfews and called out the riot police, in some states governors called out the state police and the National Guard. President Donald Trump called the Minneapolis protestors, “thugs,” and tweeted that, “When the looting starts, the shooting starts.” When protestors appeared in front of the White House, Trump tweeted that they would be received with “vicious dogs and ominous weapons” and said that, “many Secret Service agents (who guard the president) are just waiting for action.” At the same time, Trump told the press at the same time that, “MAGA loves the black people.” MAGA is his slogan, “Make America Great Again.” As the protests spread across the country, Trump and his vice-president Mike Pence flew to Cape Canaveral, Florida to watch the launch of the Space-X capsule where Trump said prepoterously, “As we usher in a new era of space exploration, we are reminded that America is always in the process of transcending great challenges.”

Trump blamed the rebellion on “Antifa,” the leftist anti-fascist movement, on the Democrats and called for “liberal mayors and governors” to “get much tougher” on protestors, and he threatened to call out the military. He also suggested that maybe there should be “MAGA night at the White House,” which would surely lead to conflicts between his supporters and protestors. Attorney General William Barr said that the demonstrations had been hijacked by “far left extremist groups.” He promised to use 1960s anti-riot laws that prohibit crossing state lines to riot. At the same time, there were several unconfirmed reports that armed white men wearing symbols of far-right groups, such as the Three Percenters, had infiltrated some of the demonstrations.

Joe Biden, the Democratic Party’s presumptive nominee, stated that, “Protesting such brutality is right and necessary. It’s an utterly American response….Violence that endangers lives is not.” Bernie Sanders, former presidential contender now supporting Biden, tweeted, “George Floyd’s murder is not only an outrage. It is the latest manifestation of a system that callously devalues the lives of Black people.”

Labor and the Left have been involved as well, with union members participating in many demonstrations. The Amalgamated Transit Union, which represents bus drivers throughout the country, called upon its members to refused to transport prisoners for the police. Nurses showed up at protests in Brooklyn with signs about the lack of equipment that had also meant Covid-19 patients couldn’t breathe. The Democratic Socialists of America issued a statement condemning the racist police killing of Floyd, but the speed, size, and scope of the current protests go far beyond the capacity of the left to play a significant role.

Posted May 31, 2020 Civil Liberties/Repression, Racism, Social protests, Uncategorized, United States by Dan La Botz
About Author
DAN LA BOTZ is a Brooklyn-based teacher, writer and activist. He is a co-editor of New Politics.