Political Struggle Amidst the Pandemic in the United States 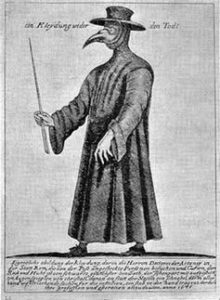 Doctor’s Costume during the Black Plague of the Fourteenth Century. The mask may have helped protect the doctors.

Following over a month with large parts of the United States shutdown, the coronavirus hospitalization rate peaked last week, and the principal debate now is over when and how to restart the economy. A fight has broken out between the President and state governors, while rightwing groups have held armed protests demanding a reopening of the economy, and workers have protested and struck over health issues.

Hospitalizations in the United States peaked last week, but the disease continues to spread. The country had 728,094 cases and 34,726 deaths as of April 19. The disease is rampant in nursing homes, prisons, immigrant detention centers and meat packing plants. In response governments have released some prisoners and immigrants. The country’s biggest cluster—640 cases—appeared in the Smithfield pork processing plant in Sioux Falls, South Dakota with other outbreaks at plants in Iowa and Colorado. All of those plants have been shutdown.

The national lockdown has continued. There are now officially more than 22 million unemployed; some economists estimate an unemployment rate of 20 percent, indicating that the country is plunging into a Second Great Depression.

The CARES Act[1] provides for a one-time-only payment of $1,200. Some 80 million should get their government relief checks this week by direct deposit to their bank accounts, but 60 million, mostly low income people who do not used direct deposit, will have to wait longer to get a check in the mail. The Act’s small business loan program is already out of money after spending $349 billion, and many small businesses remain in crisis.

While some workers are receiving relief, others are coming under attack. The Trump administration has proposed to aid growers by cutting farmworkers’ wages, already among the lowest. Trump has also proposed cutting the United States Postal Service’s worker benefits package. Congress has so far failed to refinance the USPS, which could go broke and be forced to close in June.

The pandemic has disproportionately affected women. Many are homecare workers, nursing home workers and other low-wage caregivers that have less protection. Women make up 87% of registered nurses and 71% of cashiers. Retail sales has virtually collapsed, throwing many women out of work. There is concern that under stay-at-home orders women are experiencing more domestic violence. At the same time, conservative officials in Ohio, Mississippi, and Texas have declared abortions to be “non-essential” and have suspended the procedure during the coronavirus pandemic. The courts have overruled some of those orders.

Trump continues to hamper efforts to solve the health crisis by giving false informtion. Last week he declared—contrary to the Constitution–that he had “total authority” to order the nation to return to normal. When several governors said that they would ignore him, Trump backed down. Then, when rightwing organizations such as the Freedom Foundation organized protests—some of them armed—in Michigan, Kentucky, Texas, Oregon and Washington to demand the immediate reopening of those states, Trump tweeted support.

The central political struggle now is largely between those who want to follow the guidance of health experts to prevent triggering a second wave of Covid cases, and the President, many Republicans, and business owners, who want to reopen the economy as early as May 1. Tens of thousands of lives hang in the balance. Health experts say testing is critical to reopening, but so far the United States has tested only one percent of the population. The experts also say that social distancing may be necessary until 2022.

Social struggle goes on too with at least 100 wildcat strikes since the pandemic struck. Las week hundreds of workers at McDonald’s, Burger King, Domino’s, and other restaurants walked off the job to demand health protection. The struggle continues.