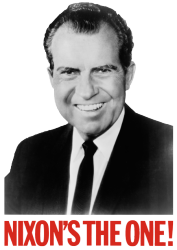 This is the fourth part of A New Politics in America. Earlier parts of the series can be found here.

The Republican Party responded to the white middle class and working class voters who had lost status, income, and pride in their country by working to turn their disappointment and depression into ressentiment and political power. Richard Nixon famously first saw how whites' resentment could be turned in the Republicans' direction during his 1968 presidential campaign, adopting the “southern strategy” of winning over the South’s racist white voters—the former Dixiecrats of the Democratic Party.

Building on Barry Goldwater's relative success in the South in 1964 and learning from George Wallace's American Independent Party campaign, Nixon advocated "states' rights," code for racial segregation, and won several of the southern states and the 1968 election. In 1972 Nixon won 70 percent of the vote in the Deep South, the presidential election again, and a place in history as the creater of a new Repubican majority.

Throughout the social turmoil of the 1970s and through the rest of the century, Southern white voters moved into the Republican Party in large numbers. Ronald Reagan continued this strategic focus on race and resentment in his 1980 election campaign, also endorsing “states’ rights.".[i] George W.H. Bush in his 1988 campaign transformed the southern strategy into a suburban strategy, appealing to the racism of white middle class and working class voters in the North. Bush senior attacked Democrat Michael Dukakis, governor of Massachusetts, for creating a prison weekend furlough program that had released Willie Horton, a convicted murderer, who had failed to return from his furlough and committed a robbery and rape. A photo of Horton with a large Afro became the racist centerpiece of G.W.H. Bush’s successful campaign for the presidency. Horton came to represent everything that many southern and suburban white resented, feared, and hated.

Throughout those years, the Republicans succeeded by appealing to white voters’ racism in winning and holding middle class and working class voters. Certainly by the 2000s the Republican Party had become identified in the minds of most Black Americans as the party of racism, and few would vote for it.

If white working class voters went over to the Republican Party, it wasn’t only because it seemed to have become their champion, but also because the Democrats seems to have neglected and spurned them. The Democratic Leadership Council, formed in 1985, and its Progressive Policy Institute worked to move the Democrats in a more conservative direction. Bill Clinton came to exemplify their “Third Way” approach, meaning a position between the social liberalism associated with Franklin D. Roosevelt and Lyndon Johnson and the Reagan Republicans’ arch conservatism. The DLC, while continuing to support the historically bi-partisan imperial foreign policy, advocated pro-business policies, welfare reform, meaning reduction of the welfare rolls, education reform that included charter schools, and backed the negotiation of the North American Free Trade Agreement (NAFTA).

Democrats have occupied the White House for sixteen of the last twenty-four years, and in that time scored some important victories for working families – the Affordable Care Act, an expanded Earned Income Tax Credit, and the Family and Medical Leave Act, for example.

But they’ve done nothing to change the vicious cycle of wealth and power that has rigged the economy for the benefit of those at the top, and undermined the working class. In some respects, Democrats have been complicit in it.

Both Bill Clinton and Barack Obama ardently pushed for free trade agreements, for example, without providing the millions of blue-collar workers who thereby lost their jobs any means of getting new ones that paid at least as well.

They also stood by as corporations hammered trade unions, the backbone of the white working class. Clinton and Obama failed to reform labor laws to impose meaningful penalties on companies that violated them, or enable workers to form unions with a simple up-or-down votes.[ii]

So not surprisingly union members began to migrate out of the Democratic Party, with about 40 percent of labor union households regularly voting for Republican candidates in recent elections. While white workers turned in increasing numbers from the Democratic Party, Black Americans—despite Bill Clinton’s attack repressive criminal justice politics and attack on the social welfare system—continued to see the Democrats as the only possible alternative.

When George W. Bush barely defeated Al Gore thanks to a Supreme Court decision on the Florida vote recount, becoming president in 2001, he was not a particularly popular. But Bush’s patriotic and militarist response to the September 11, 2001 terrorist attack on New York City and Washington, D.C., brought him sudden approval and support. But as the Afghanistan and Iraq wars dragged on, his popularity waned. Still, despite massive anti-war demonstration—one of them a global protest larger than any ever seen—Bush continued the expensive and death-dealing wars until they had eroded his popularity, while the Great Recession of 2008 destroyed it virtually completely.

The Economic Crisis of 2008

The most important development driving the more recent polarization of American society and the rise of a new politics in America was the economic crisis of 2008, the Great Recession. Speculation in bundled, securitized, subprime mortgages led to bursting bubbles in 2007 and 2008 and to the folding of a slew of mortgage lenders—more than a hundred of them—and then to the collapse or near collapse of several major banks and other financials including AIG, Bear Stearns, Citigroup, Fannie Mae and Freddie Mac, IndyMac, Lehman Brothers, Merrill Lynch, Wachovia, and Washington Mutual. By the end of 2008 it seemed that not only the American economy but the world economy might collapse.

The U.S. government—first under George W. Bush—intervened to arrange mergers, to take over banks temporarily, and to pump hundreds of billions of dollars into the financial sector, nevertheless, the financial crisis ramified through the economy sweeping away $19.2 trillion in household wealth as banks foreclosed on 12.5 million homes between 2007 and 2013.[iii] The 2008 depression eventually wiped out more than two million jobs in the first year, affecting virtually every sector of the economy from mining to manufacturing to services and soon leading to an official unemployment rate of 10 percent, though many thought the real jobless rate might well be 16 percent.[iv] Millions of Americans found themselves without work, some without homes, and many without prospects as the recession dragged on. While the government announced that the recession that had begun in 2007 ended in 2009,[v] for many it seemed even as late as 2014 that it had never ended.[vi] In many parts of the country it is still not over.

The Great Recession finished off the reputation of George W. Bush, or what was left of it after the failed Iraq War. He left office having failed at both foreign and domestic policy, the lies about weapons of mass destruction in Iraq having utterly discredited his administration in the minds of many, while the 2008 recession that began on his watch turned him into a loathed public figure. Both liberals and conservatives turned against Bush, leaving the country disillusioned with politics as usual, hoping for change.

Posted March 17, 2016 Electoral Politics, United States by Dan La Botz
About Author
DAN LA BOTZ is a Brooklyn-based teacher, writer and activist. He is a co-editor of New Politics.