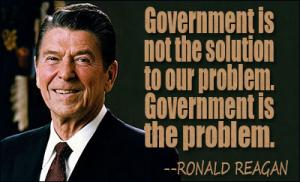 This is the second part of an article about the new politics in America today. The first part can be found here.

The second development that led to a new far right was the economic crisis of the 1970s, or, to be specific, the two recessions of the 1974-75 and 1979-82. These two downturns caused employers to close steel mills, auto plants and other manufacturing plants throughout the Northeast and the Midwest with a devastating impact on the working class and on the labor movement.

Unemployment reached 8 percent in 1974-75 and 10 percent in 1981. Labor unions began to decline in size, economic power, and political influence—a development that became a long-term trend from 1980 until today—weakening not only the unions themselves but also the labor base of the Democratic party. Employers took advantage of the economic downturns and labor’s disorientation and incomprehension to demand concessions, taking back from workers wage gains, health benefits, and working conditions.

Deindustrialization, as it was called, was a result of foreign competition, and imported steel and cars played a role, but at the same time employers downsized many mills and factories and yet, because of an astronomical rise in productivity—due to the introduction of continuous process, computers, numerical control, and other forms of automation—they produced as many or even more steel, cars, and other products as before, some of those now made in non-union plants, because the downsizing was accompanied by running away to the South or to rural areas in the Midwest. Other plants moved abroad: to the Caribbean, to Mexico, and to countries around the globe, all part of the tendency toward global production.

These developments—deindustrialization, downsizing, and runaway shops left hundreds of thousands of workers unemployed and meant that the next generation of workers would not have access to those prized, high-paying, union jobs. While the plant closing and unemployment affected white, Black, and Latino workers—and while Blacks arguably suffered the greatest economic loss—white industrial workers suffered a combined loss of social status and then of jobs and incomes that left many feeling especially devastated and aggrieved. The social and economic crises of the period also battered small- and medium-sized entrepreneurs, who were also mostly white men. The white middle class and working class threatened by the rising challenges of Blacks, Latinos, and women and devastated by the economic crisis, white people who mostly lived together in the suburbs, became the social base of a new, cross-class, rightwing political movement.[i]

The government’s relationship to labor changed dramatically in this era. The New York City bailout of 1975 with its Emergency Financial Control Board, the closing of schools, libraries, and fire stations, and union pension funds put at risk to buy city bonds represented a model of what would come to be called neoliberalism. It was followed in 1979 by the Chrysler bailout, with Jimmy Carter’s administration and the U.S. Congress overseeing an agreement to loan Chrysler $1.5 billion, a deal that closed more than a dozen plants, reduced the workforce from 100,000 to 57,000, and forced not only a wage freeze, but also concessions and drastic changes in work rules. All of this culminated in the PATCO massacre. When in 1981 the 13,000 members of the Professional Air Traffic Controllers (PATCO) struck for a shorter workweek, higher hours, and better conditions, Ronald Reagan fired 11,345 who refused to return to work, replacing them with supervisors, scabs, and soldiers. The union was broken and decertified. While some unions had supported PATCO, there was no unified response from labor to the crushing of the union beyond a symbolic Solidarity Day demonstration in Washington. Reagan’s handling of PATCO sent the message to public and private employers as well as to unions and workers that a new era had begun.

Labor leaders had no strategy and encouraged no generalized fight back against plant closings and concessions, or against the attack on PATCO, and while there were some rank-and-file struggles they tended to be isolated. The unions suffered a defeat without a battle. They surrendered to what appeared to them to be the inevitable. Their acquiescence defined the unions for years to come. Workers drew the conclusion: They no longer fight for us.[ii]

These developments meant a profound change in the economic and social world of suburban working class whites. While men were losing their jobs, women were entering the workforce in larger numbers, and often becoming the principal wage earner. Men lost their role as the primary breadwinner, as head of the household and king of the castle, as the old saying goes. With industry declining and services growing, white working class and middle class men and their sons now found themselves competing for lower-paying jobs with women and with Black and Latino workers—as well as with an enormous immigration of undocumented workers coming principally from Mexico and Central America. With the Democratic Party seeking support from—and therefore more responsive to—the demands of racial minorities, women and immigrants, white males, including white male union members, now feeling betrayed by the Democrats, began to move into the Republican Party. Though white women, who had since the 1970s achieved greater access to jobs, higher salaries and wages, and more economic independence—with many of them single heads of households—tended to be less likely to accompany the white men as they moved to the right.

White working class frustration in the 1960s to 1980s might have taken another direction. There were significant labor movements in this period made up of white, Black and Latino workers who fought both their own bureaucratic and corrupt leaderships and the employers. There were rank-and-file and reform movements in labor such as the Miners for Democracy in the United Mine Workers union, the Ed Sadlowski campaign for president of the United Steel Workers, the Teamster Union Rank and File, the Dodge Revolutionary Union Movement in the auto plants, and others too. The early 1970s saw one of the nation’s greatest strike waves as angry workers, some of them Vietnam veterans, shut down trucking companies, the U.S. Post Office, and the Bell Telephone Company.[iii] There were also anti-concessions movements in the 1980s, most important in the United Auto Workers.

While those movements were quite impressive, they never became large enough and never united workers across industries and unions in such a way as to create a genuine working class movement. Nor did they ever become politically effective. Several major labor unions and rank-and-file activists founded a Labor Party founded in 1996 under the leadership of Tony Mazzocchi. But fearing that challenging Democrats would split the movement, it never ran candidates, became irrelevant and dissolved in 2007.[iv] Without a broad and political working class movement there could be no working class politics as an alternative to the Republicans and the Democrats as together they moved to the right.

It was also during these years that the United States began to decline from its position as the undefeated and dominant leader and organizer of world capitalism. The United States’ loss of the Vietnam War in 1975 was seen by a conservative sector of the society as the result of a stab-in-the-back by draft-dodgers, student protesters who burned their draft cards, and by the liberal establishment that itself eventually turned against the war. Rightwingers argued that the United States might have won the war in Southeast Asia had their been greater commitment of money, troops, and, some argued, the use of tactical nuclear weapons—but the liberals, they said, had given up. The Democratic Party, headed by Presidents John F. Kennedy and Lyndon B. Johnson, which had led the war in Vietnam, had—despite carpet-bombing much of North Vietnam and the commitment of 500,000 men—finally lost it. Democrats came to be seen by Republicans and more conservative Democrats as being afraid to fight, weak in foreign policy, and ceding territory to the Communist enemy.

Even after defeat in Vietnam, of course, the United States remained an imperial power, with hundreds of bases around the world, hundreds of thousands of soldiers, sailors, and marines, and almost constant military interventions in one region or another. Jimmy Carter might have talked about human rights, but the United States ceded power nowhere. Still, after Vietnam, it seemed to conservative Americans that the United States was in retreat. Not until Republican Ronald Reagan invaded the tiny island nation of Grenada in 1983 did the United States begin again to act again more openly as a military power on the world stage. Reagan hailed his Star Wars program—the $200 billion Strategic Defense Initiative—that challenged the Soviets. He was seen as strong, assertive, and appropriately aggressive in claiming the United States’ dominant role in the world. When the crowds who adored him chanted, “We’re Number One,” that’s what they meant, that the United States was, is and, always should be number one in wealth, political hegemony, and military might. For middle aged white men who had lost social status and suffered economic loss in the deindustrialization era, identification with a strong male leader and a strong nation—with a Ronald Reagan or a George W. Bush—helped to recoup their self-esteem. With Ronald Reagan sitting tall in the saddle, one could feel like a white man again.

[i] Dan La Botz, “What Happened to the Working Class?,” New Politics, Winter 2010, available at: http://newpol.orgwhat-happened-american-working-class

[ii] Kim Moody’s An Injury to All: The Decline of American Unionism (New York: Verso, 1988) tells the story of the decline of the unions in this period.

[iv] The story is somewhat more complicated because the Labor Party was associated with—though it did not officially support—Ralph Nader’s 2000 run for president. That discredited the Labor Party in the eyes of most union officials who saw Nader as a spoiler in the Bush-Gore contest. Les Leopold, The Man Who Hated Work and Loved Labor: The Life and Times of Tony Massocchi (White River Junction, Vermont: Chelsea Green Publishing Company, 2007), pp. 476-78.