A New American Civil Rights Movement is Being Born 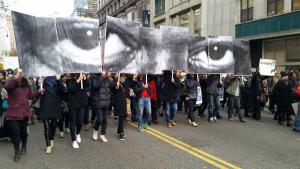 A new civil rights movement is arising in the United States.

Across America from New York to California, in all of the major cities, there have been militant, disruptive demonstrations involving altogether tens of thousands in protests against the police killing of Michael Brown and Eric Garner and the failure of grand juries in either Missouri or New York to indict the police officers who killed them. Beginning in Ferguson, Missouri (near St. Louis) in August, the protests have continued throughout the fall, culminating in a massive movement for days in December. On December 13 hundreds of thousands of protestors marched New York City and Washington, D.C. and other cities. We may be at the beginning of something new, big, and important.

Protestors raise their hands shouting “Hands Up, Don’t Shoot,” as Brown is believed to have done. Others grab their throats and scream “I can’t breathe” eleven times as Garner did as he died, an event recorded on a cell phone video and seen by millions now. The demonstrations are diverse in every way: African Americans, whites, Latinos and Asians, mostly young but including people of all ages.

Where I live in New York we have marched through the streets for miles from Union Square to Harlem, we have blocked major intersections and highways, and we have held die-ins in front of the Barclay Center sports arena where the Brooklyn Nets were playing. In Chicago protestors blocked Lake Shore Drive, a major thoroughfare, while in Berkeley and Oakland they shut down Interstate Highway 80. Hacktivists also shut down several City of Oakland websites. Hundreds have been arrested, though by and large the police have been restrained, and there has been nothing like the massive repression experienced by the Occupy Wall Street movement.

While the conservative Fox News has consistently supported the white police officers and denigrated the black victims, one CNN reporter cried as she described the diversity and idealism of the demonstrators. Liberal media coverage of the events has been largely sympathetic and has provoked a national conversation about the status of African Americans that goes beyond criminal justice issues to questions of the economy, to jobs, housing, and education. Some mainstream media commentators have described these developments as a new civil rights movement. And they are right.

The events began in July and August. A police officer using an illegal chokehold banned by the New York City Police killed Eric Garner on July 27, an unarmed man wanted for selling untaxed cigarettes. Shortly afterwards there were small protests on Staten Island. Then on August 9, Michael Brown, an unarmed man, was stopped by a police officer and an altercation ensued. The officer fired twelve shots at Brown, killing him. When the grand jury refused to indict the officer, Ferguson erupted in violent protests that burned down a commercial district while across the country there were demonstrations in solidarity. Then in December the New York grand jury announced that it would not indict the police officer who had killed Garner back in July, even though coroner ruled his death a homicide resulting from compression of his neck. Of course, these were only the latest in a long list of African American men killed by the police. The Malcolm X Grassroots Movement has done a study showing that a black man is killed by police in America almost every day. No surprise then that when the police officer who killed Garner wasn’t indicted, once again the protests became national.

Some of these demonstrations have been organized by old left organization or previously existing networks, but most of them have arisen spontaneously, organized on Facebook or Twitter. Longtime African American civil rights leaders such as Rev. Jesse Jackson, who first became prominent in the 1960s and Rev. Al Sharpton who first became a public figure in the 1980s, both of whom have been active in the Democratic Party, have attempted to keep the protests with in the usual liberal channels. But those in the streets are mostly in their teens, 20s, or early 30s, and the old civil rights leaders don’t speak to them or for them. Neither for that matter do the old left groups which have attempted to put themselves at the center of the movement. In truth, the enormous size and fluidity of the movement makes it impossible for any of America’s small left groups to have much impact.

Like Occupy, where some of the leaders of this new movement got their first experience, this movement is largely spontaneous, decentralized, fast-paced, creative and daring. Most of its activists have never before been in a demonstration and hardly any have been part of a social or political organization. The movement doesn’t so much have a program as it has a moral cry: “Black Lives Matter.” People pour into the streets because they are filled with pain and sadness, with moral indignation, and because they want to live in a better country than the one we have now. As some have said, this is the “American Spring.”

We see once again in these demonstrations—as we saw in Los Indignados of the Plaza del Sol and the Tahrir Square and Occupy Wall Street protests—the challenge: will a largely spontaneous mass movement create new organizations, push forward new leaders, develop a social and political program, or will the receding tide of the movement leave little behind? The African American civil rights movement of the 1955-1975 period created a whole series of organizations—SCLC, SNCC, and the Panthers—as well as important leaders such as Rev. Martin Luther King, Fannie Lou Hamer, Ella Baker and Malcolm X. Will this new movement create its own organizations, leaders, analyses and programs to match the moment? That’s the question.

Dan La Botz is a co-editor of New Politics. This article was written for the Swiss socialit solidaritéS journal.