Mexico – Plunder and Violence in the New Belle Epoque 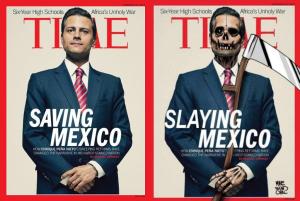 This is the third and last of three book reviews that look at what Mexican intellectuals on the left have written in an attempt to understand Ayotzinapa and what it symbolizes and signifies for their country and its future. The first review appeared here and the second here.

Time of Plunder: Seven Essays about an Epoch-Making Change (as I translate the title) must have been written and already in production when the Night of Iguala occurred, though both of its authors have since spoken out strongly on the September 26, 2014 murder of six and kidnapping of 43 students at the Ayotzinapa Rural Teachers College, placing blame on the capitalist system and on Mexican President Enrique Peña Nieto. While Iguala and Ayotzinapa aren’t mentioned in Time of Plunder, which is focused on the violence and plunder of the contemporary era, still it represents a profound analysis of the forces that have created the system that generated those events and that has taken the lives of at least 160,000 Mexicans an disappeared some 25,000 since President Felipe Calderón launched the drug was in 2006.

Some of the seven essays in this collection were written by Gilly, some by Roux, and some by the two together, though the intellectual, political, and even stylistic coherence of the book is such that one would hardly know who wrote which. These are two authors who have come to think and write as one and the result is impressive. I will not, therefore, pause to describe each author and essay, but treat them as a team, simply referring to the book’s arguments.

The book they have produced is highly theoretical, analyzing the nature of the current, turbulent period in which we live, its economy and its politics. They characterize our contemporary era as a second Belle Epoque. The first Belle Epoque, referring to the period between the Franco-Prussian War (and the Paris Commune) and the outbreak of World War I, was an era in which the European (and for that matter the American) bourgeoisie flourished—an extraordinary period of scientific and cultural achievement—based on the oppressive exploitation of their own working classes and on the savagely violent pillage of their colonies in Africa, Asia, Latin America and the Caribbean.

The Belle Epoque gave rise to imperialism and led, of course, to the First and Second World Wars, together with the Jewish Holocaust. But when it ended a new period ensued, a result of the earlier struggles of the European labor movement, including the Russian Revolution of 1917. The end of the Second World War, the war-time resistance movements and the class struggles that accompanied and followed the struggle for liberation from the Nazis, led to a new social compromise in Europe, in the United States, and also in some developing countries such as Mexico where the new pact resulted from the Mexican Revolution. The British Labor, European Socialist, American Democratic Party and Mexico’s Institutional Revolutionary Party entered into a new social pact with the unions and established welfare states that to varying degrees provided pensions, health coverage, unemployment insurance, and workers’ compensation to the working people in their countries.

The famous “Thirty Golden Years” from 1938 to 1968—a period of expansion for the leading capitalist countries and a kind of “Bronze Age” some developing countries made this possible. The capitalist system’s uncharacteristic stability throughout the period depended not only on prosperity, but also on the corporate character of relations between the ruling party and the labor unions. Labor militancy was attenuated by the unions’stake in the system that gave them rising wages and benefits, even if working conditions often declined, and their votes kept social reform parties in power.

Gilly and Roux, frequently referring to Marx’s writings, describe the history I have summarized here, then go on to argue that beginning in the early 1970s and accelerating in the twenty-first century we entered a new period now characterized by the privatization of the common and social property, driven by technological change, organized by finance capital, and heading toward environmental catastrophe. We live, they write, in an era of transition, restructuring relations between nations and capitalist enterprises, a life and death struggle of capital at the global level and in every region of the world.

Turning to Mexico, and influenced by Antonio Gramsci and particularly by Cornelius Castoriadis and his view of the state as not only an organization commanding resources but also as an idea (an “imaginary”) constructed out of past social conflicts and the resulting social pacts, they examine modern Mexico’s history. Here Adolfo Gilly’s earlier writings, particularly La revolución interrumpida (published in English under the title The Mexican Revolution), form the basis of their interpretation. The authors go on to trace the breakdown of Mexico’s social pact from the crises of the Tlatelolco massacre in 1968, through President Carlos Salinas’ violente assault on the corporate unions (the bazukazo), to the Chiapas uprising led by the Zapatista Army of National Liberation (EZLN), to the murder of presidential candidate Donaldo Colosion, the negotiation of the North American Free Trade Agreement, and the mass migration of Mexicans to the United States.

The tendency of Mexico to be dragged toward the north, however, does not mean the conversion of Mexico into a protectorate. The governing Mexican elite is not an administrator or manager of U.S. interests. It represents the existence of an internal political leadership that is attempting to round its relationship with its northern neighbor on the existence of a complex local business class and on its own domestic legitimacy. The absence of this legitimacy, or this precarious legitimacy, means the national leadership becomes every more fragile as it confronts the external limits.

Having discussed Mexico, they reinsert it into the world economic and political situation, describing the four dominant characteristics of the period: 1) a new special division of labor; 2) new information and communication technologies; 3) the expansion of the means of transportation; 4) the growth of mass migrations. All of this accompanied by the violent dispossession of ordinary people.

In a final essay, they take up the issue of race, in particular the idea of whiteness, based on Bolívar Echeverría’s argument that whiteness is a constitutive element of modern capitalism. The book ends with the warning of Aimé Césaire, the great poet, that we are in an era—he was writing of the Nazi era—of barbarous civilizations. Though Césaire wrote of the Nazi era of the 1930s, his warning seems to apply to our era, around the world, and in Mexico.

How could we not then see this book as a profound discussion of the origins of the system that produced the terrible Night of Iguala, of the massacre of the poor, indigenous, peasant students of the Ayotzinapa teachers’ college. As already mentioned, Gilly and Roux have both spoken out strongly against the system and the state that produced that atrocity.

Posted April 6, 2016 Mexico, Political Economy by Dan La Botz
About Author
DAN LA BOTZ is a Brooklyn-based teacher, writer and activist. He is a co-editor of New Politics.